The Best Travel Writing and Books About Portugal: A “Country with a Divided Soul” Wander through cobbled streets with evocative Portugal travel writing and bookmark the best books about Portugal. We’re sat in a small tavern in the not-so-good-after-dark part of town.

The pastel, a kind of salted cod fishcake, is fresh and warm. The hands that made it only a table away, reaching for homemade olive oil, and then, as part of the same fluid motion, topping up my glass with wine.

Green wine, my second ever taste, from the “vinho verde” region in the northern Portuguese province of Minho.

We’re not in the north, though. We’re more or less around the centre, in Coimbra, the former city of kings.​ Disclosure – if you buy through these links, we may earn a teeny, tiny amount of commission at no extra cost to you. Cheers! Coimbra (which sounds like the Aussie Queensborough without the “s”) today functions as a high-flying university town.

In fact, it’s been flying high since 1290, the year Portugal’s oldest university was founded. The country itself had not been around long (around 100 years at most) and the university that started in Lisbon was soon moved to the former capital, Coimbra, in a switcheroo that seems to suited both cities.

And grad students and ex-students raise money by giving extremely well educated tours to more tourists, like me.

This is my second of the day, the first a historic walk through the student campus that also happens to be a UNESCO World Heritage Site.

Oscar Cumps Ruelle, a Frenchman raised in Brazil and now studying in Coimbra, offered a snapshot of Portugal’s history through the buildings around the steep cobbled lanes.

We see the footprint of the Catholic Church, the legacy of the Jesuits, expelled in 1759, and the block-like starkness of Salazar, Portugal’s military dictator for much of the 20th century.

A SNAPSHOT OF PORTUGAL’S PAST

Oscar is deft with diplomacy and where others would find this terrain prickly, he glides through the controversy with ease.

Beyond that, there’s talk of the university itself. How some students save money by living in “republics,” American frat houses without the pranks.

How a shop ban within the centre leaves students hauling laundry powder and coffee up the “breakback steps.” And how humanities and law students never see to eye to eye.

Some things, it seems, are universal, and I relish, with more than a drop of nostalgia, the youthful rush of philosophy and pettiness found within a university town. Trams in Lisbon – a favourite photo thing to do in Portugal

We began in Lisbon, of course, a city I’d inexplicably overlooked, zipping from airport or highway to somewhere else more pressing.

That turned out to have been a mistake.

Lisbon is so much more than instagram photos of white flowery dresses next to olde worlde trams.

It’s an historic city, for sure, spread across seven gravity-defying hills. The trams are present, yes, (and pretty) but so is a large modern metro and the current yardstick of modernity: the car-taxi sharing app uber.

Lisbon mashes up UNESCO sights with minimalism, azulejo ceramics with on-trend chrome, and family run tavernas with the ultra-fashionable Time Out Food Market.

Yes, today’s Lisbon is sexy with a sultry kind of s.

But while Lisbon is a fabulous city that makes me long to return, it has a different aura, or gravitas perhaps, to the European trinity of London, Paris, Rome.

And it’s this thought that brings me back to a small taverna in Coimbra, this time over sardines. Portugal and the Era of Exploration

“It was Portugal who first discovered the world,” my friend tells me.

“And now, who else remembers that?”

Or, as my Lisbon based friend explained, “we discovered Brazil because we got lost and didn’t realise it. A storm blew us off course from the Cape in South Africa and now ‘woo-woo-woo’ we discovered South America.”

The Discoveries monument in Belem stares out across the River Tagus, without apology. A stone ship with statues that have become household names.

Still, uncomfortably, more of those names ring no bells at all. And talk of “discovering” places by Europeans is decidedly no longer in vogue.

Yet there’s definitely one aspect of Portugal that’s recognised the world over, even if people don’t always make the connection at first.

Not only is it there in the country’s name, but also in the city that brought it to fame: port from Porto. 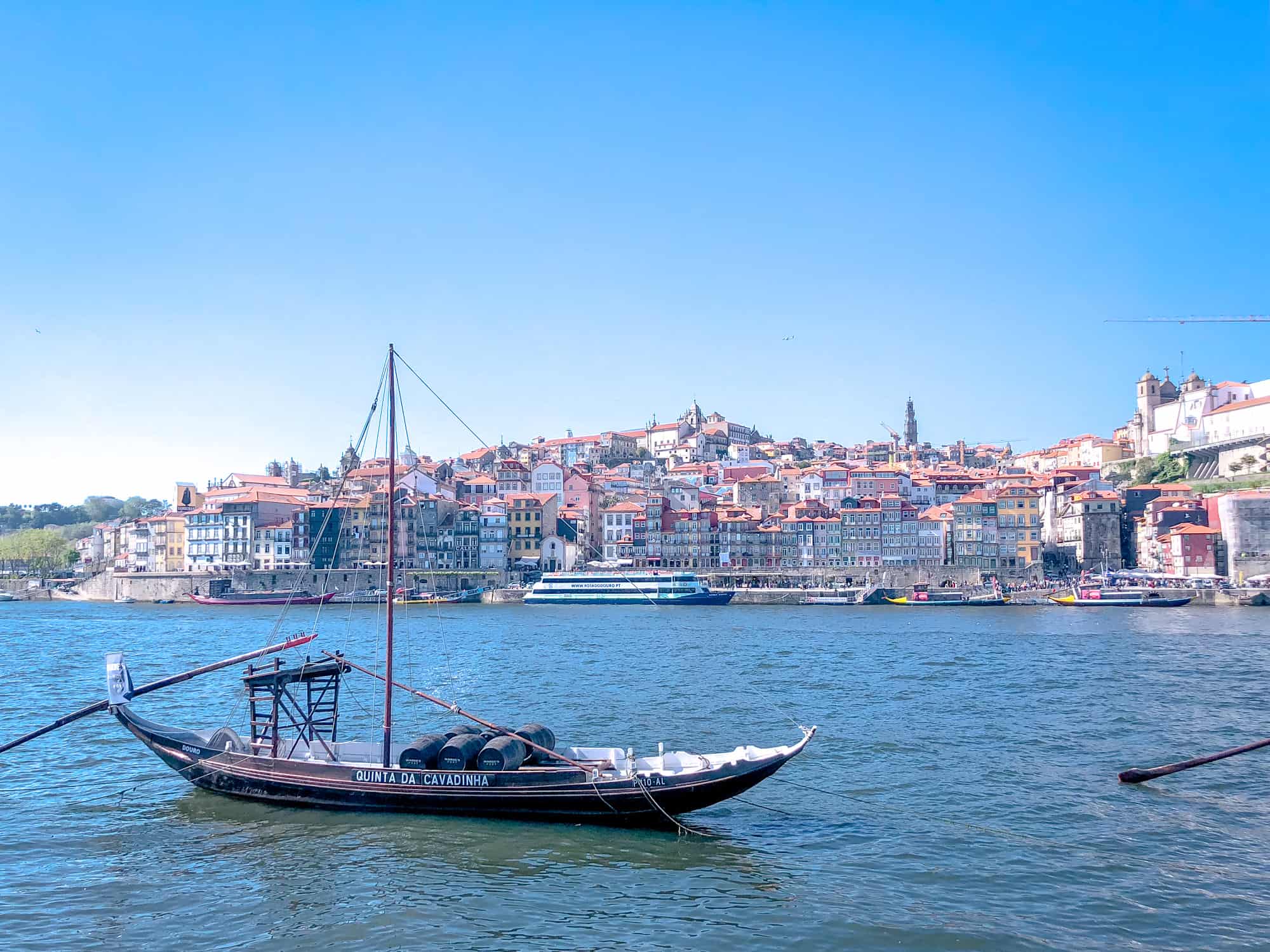 Porto and the Port

This city on the Douro Valley throws an arrival party like nowhere I’ve seen.

One minute, we saw the usual trackside paraphernalia of travel by train. The next, a clifftop view of higgledy-piggledy medieval Ribeira,  boats bobbing like giant gondolas below.

The bridge, Dom Luis I, is one of the most famous points in Porto, with buskers and boat tours gathering on either side of the Douro as the sun sets – and, well, for hours and hours before and after dark too.

It’s like Venice, stretched larger, or Cologne with a warmer style, or Paris, mixing in leaf-lined Montmartre, or, well… it’s like nowhere it’s just itself.

Grand, old, young, and beautiful through teetering steep cobbles in Gaia to glass and cement new cool at the Casa da Musica. A Visual History in Portugal

Porto, like Lisbon, trades a checklist of “must-sees” for a rich and cultural vibe.

Like Coimbra, it loves its luscious visual literary history (with the Joanina Library in Coimbra as exhibit A and the now insta-famous Livraria Lello as exhibit B.)

“What I love about Portugal is its unpolished off-the-radar old-world charm. It manages to remain deeply authentic amid this globalised and heavily trampled world around us,” says author Kevin Raub.

That’s certainly true in Porto, as I nestle into the corner of cosy rough and ready O Buraco, with red chequered tablecloths and the ever present danger of accidentally ordering tripe.

It was true of cosmopolitan Lisbon, through the new venture at Banca de Pau where the owner let our daughter use his daughter’s trike.

And it’s certainly true in Coimbra, where Beatrice tears apart our “tapas” and talks about Portugal’s divided soul.

But whichever way you’re facing, there’s no shortage of things to do. Cork Trees in Portugal. What’s all the Fuss?