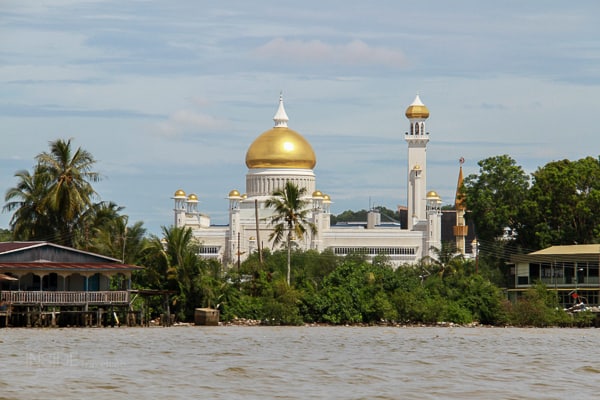 Brunei: One of the Richest Countries in the World

The small nation of Brunei is one of the richest countries in the world, tucked between the rainforests of Malaysia’s Sarawak state and the South China Sea. It’s an intriguing place to visit, and easier than many realise as it makes a great stopping point for the otherwise long flight between Australia and Europe. Here’s what you can do in Brunei as a visitor and what it’s like to travel there. Scroll on down for a series of fast facts.

The floor creaked a little and the world around me seemed to sway. I heard laughter outside as two young men zoomed past, sending white frothy waves across the curiously subdued green water.

Our host returned, laying out curled biscuits and soft squidgy treats on gold-flecked trays in a manner that, perhaps surprisingly, reminded me of my Irish grandmother.

The floor swayed again and I sipped at my tea.

Outside, coloured boats bobbed and water licked and lapped at the wooden stilts that delved into the smudgy pea green soup. In this sector of Bandar Seri Begawan, the capital of Brunei, most lived on these watery walkways.

Weak from an illness that had resulted in a cancelled flight, it was all I could do to keep my eyes and ears open and remain upright on the swaying floor.

White spires shone, from mosques resplendent beneath the sticky sun while laundry hung in super-saturated colours and boats drifted in and out between thin stilts and ridged metal roofs.

Brunei is a curious place. No, a fascinating place. A tiny nugget of land (two nuggets, technically), squeezed into a spot on the earth’s crust next to the South China Sea and heavyweight neighbour Malaysia, it’s the government rather than the geography that always causes the greatest stir.

The Sultan of Brunei presides over an absolute monarchy, and the government has just delayed its decision to reintroduce stoning, severing limbs and flogging for theft, adultery and homosexuality under the code of sharia law.

The UN has expressed concerns.

Brunei’s mosques are brilliant and beautiful. Her women work and study science, wear shorts and short sleeved T-shirts and may or may not cover their hair. The Sultan trained at Sandhurst in the UK (the Royal Military Academy) and is reportedly friends with the Queen of England. There is a main street named in her honour, Jalan Elizabeth Dua.

Petrol prices are fixed – and low. Brunei, with its oil supply, is one of the smallest and richest countries in the world. Healthcare is free, housing subsidised and income tax does not exist. Drinking alcohol is against the law.

With so many threads to unravel, how much could I hope to learn within the limits of a single day? And the limits of gravity and illness as I focused on trying to stay upright. I stumbled on to the Royal Regalia Museum, which amid the lifesize replicas of the Sultan’s silver jubilee, offers an irresistible glimpse into the circumspect dances of high level diplomacy: gifts from other heads of state to His Majesty the Sultan of Brunei. While gilded carriages await in the foyer, the glass cases and shelves that overlook it include rosewater jars, jewels, wooden carvings from Africa and an almighty beer mug from none other than Queen Elizabeth herself.

What do you buy the man who has everything?

Meanwhile, my colleagues swung through the jungle in the rainforest at Temburong and I retreated to the air conditioned cool of my pool and palm fringed hotel, the megalithic Empire Hotel and Country Club.

My limbs were trembling, I longed to feel the soothe of sleep.

As my mind drifted through the fragments of memories of such an intriguing place, it rested on the soft black chair and the outstretched hand with the golden curved plate. The soft squidgy cake and the rolled up biscuits, the orange, the tinsel, the plastic furniture of the house that stood on stilts. And the reminder, simply, somehow, of having tea with my Irish grandmother.

Disclosure: my trip to Brunei was made possible by Royal Brunei Airlines. Royal Brunei operates regular services from most Southeast Asian cities as well as from Shanghai, London and Melbourne to Brunei. As ever, as always, I kept the right to write what I want.

Recommended place to stay: The Empire Hotel and Country Club

Have you ever travelled to Brunei? What did you think?