The Dorchester Hotel London: Sleeping Inside An Icon

There are some London addresses that tell stories before we reach them. The Dorchester Hotel London has an address with a thousand tales.

See also how to make the most of London in the fall.

Standing tall on one of Monopoly’s most prestigious purple squares, The Dorchester Hotel London has welcomed guests like Alfred Hitchcock, Richard Burton and Elizabeth Taylor since it opened in 1931.

Its Michelin-starred restaurant counts the full three stars (the only one of its kind in the UK.) The Promenade hosts five daily sittings of Afternoon Tea. And Prince Phillip spent the night here before he married the Queen.

But when the curtains are drawn and the duvet turned down, what is it like to spend the night inside an icon? The Dorchester Hotel London: Sleeping Inside an Icon

One of the most interesting things to note about spending the night in The Dorchester is that its approach to modernisation remains unashamedly in the past.

The rooms may now have every USB-type charger you could possibly wish for, but the furniture makes them discreet Disguised within period detail from 30s and  art deco glassware, The Dorchester’s message is clear: we were made in 1930s and we’re not afraid not to change.

The Dorchester London - A Palette of Cream and Gold

I stayed in suite 603/604, a combination of rooms that connect with even more to provide options for an entourage or large extended family.

As the sun set and the low lights of London’s most familiar park appeared, the room itself shimmered into life.

The scalloped gilt-edged base of the lamp glowed and the heavy silk curtains framed the evening traffic on its slow way towards Marble Arch.

In short, while first impressions were stately and refined, the human touch of hospitality reached through in a palette of cream and gold, dressed with the warmth of the sun.

And that’s no easy feat but the result of some clever design. The Dorchester Hotel London: The Vibe

Vintage glamour for the modern age, the Dorchester is a slice of London history at work. Towering displays of orchids, iconic Afternoon Tea and its very own indoor Promenade.

The Dorchester Hotel London: The Location

Tucked into a small but busy side street on the edge of Park Lane. It's a short walk from Marble Arch and Oxford Street and overlooks London's Hyde Park itself. It's perfect for exploring Mayfair and Piccadilly to the east and is well connected by public transport (the closest tube is Hyde Park Corner.) 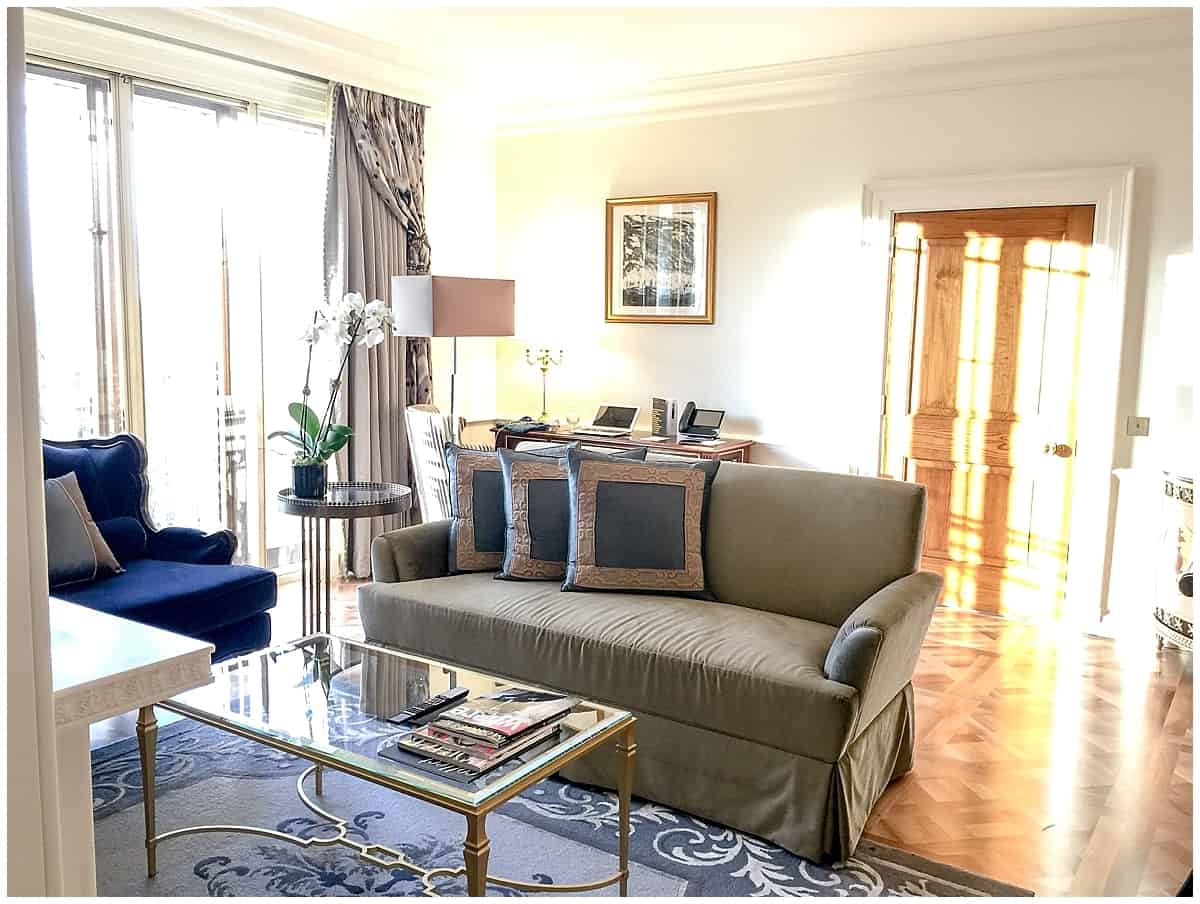 The Dorchester Hotel London: The Room

Suite 603/604 has a separate dressing area, bathroom, bedroom and suite. Colours are a restful cream and gold with splashes of character in the backlit drinks cabinet and gentle sky blue cushions.

The bathroom glistens in white and chrome and has a far more powerful shower than the age of the building would suggest.

The Dorchester Hotel London: The Food

The Dorchester offers a variety of options for dining, but make a note that the Michelin-starred Alain Ducasse is closed on Sundays and Mondays. Then there's also the Spatisserie and the Cantonese China Tang.

I dined at The Grill, which also hosts breakfast. Decked out in copper cookware and glinting in gold without natural light, The Grill carries glamour into its quiet cosy corners.

Don't be fooled by the slabs of meat on offer, though. The Grill also has its own sommelier, who will make some surprising choices to accompany your protein fix.

Breakfast carries the full range you'd expect from a hotel of this size, along with hot favourites like Eggs Benedict or French Toast you can order a la carte.

The Dorchester Hotel London: Other Facilities

The Dorchester also hosts a spa and prominent ballroom, although there is no swimming pool attached to the spa.

A miniature lavender spray bottle awaits to help you drift off to sleep. Not that I needed it after nights up with baby...

Oh, and General Eisenhower used The Dorchester as a base during World War Two.

It certainly looked that way as I passed children bearing balloons, heading to a party. You'd have plenty of space for a travel cot and the service is impeccable. However (shh!) this time, I travelled alone for a blissful night's sleep before a day of filming the next day. As a classic London experience, the Dorchester lives up to its reputation for style, glamour and service.

Who it's for? Anyone looking for a taste of history wrapped in service and comfort.

Who it's not for? Anyone looking for an off the beaten track bolthole. (Instead, see unusual things to do in London.)

Disclosure - I received a complimentary stay at The Dorchester Hotel London for review purposes. As ever, as always, I kept the right to write what I like. Life loses all meaning otherwise ;-) If you book or buy through the links on this page, we may earn a small commission at no extra cost to you. Cheers!

Rugged and beautiful and tickling the toes of England’s south west peninsula, END_OF_DOCUMENT_TOKEN_TO_BE_REPLACED

Get ready to hit the open road with these fantastic road trips. END_OF_DOCUMENT_TOKEN_TO_BE_REPLACED