The Legends of Hanoi Around the corner is the Old Quarter. Around the corner is the vision of Hanoi I expected to see: the fuel-filled crammed corners of Asia with chickens underfoot, wires overhead, clattering and chattering and shouting all around amid a cocktail of scooters, food stalls and silk embroidered cloth flowing at the edges of my vision. The maze of Asia that doesn’t so much assault the senses as swaddle a chloroform-soaked rag over their mouths, bundle them into the back of a car and drive them for ten hours straight before holding them at a cliff edge and demanding a hefty ransom.

But as I said. That criss-cross of energy. That’s around the corner. Around another few corners lies a different Hanoi again. Chic, cool, colonial. A lazy, leafy avenue where Graham Greene holed up to write The Quiet American at the now legendary Sofitel Metropole Hotel. There’s an ice cream bar and fluorescent shopping centre with an homage to Apple hero Steve Jobs. There’s also the Keep Calm & Carry On slogan designed for the London Underground should Hitler’s invasion prove successful during the blitz of World War Two.

A few more corners after that lie the ruins from the Vietnam War (known as the American war in these parts) and the queues upon quiet queues waiting to see the body of Uncle Ho, still lying in state.

But right now I’m not on those corners. I’m here, within eyesight of a communist workers’ sculpture and a globe held high by two red hands to the sky as a gesture of peace.

I’m at the edge of Hoan Kiem Lake. The City of the Soaring Dragon

Hanoi, as it turns out, is a city of lakes and the word Ha noi  even translates to mean the city between two rivers (though one of its earliest names was Soaring Dragon, which, let’s face it sounds much cooler and would have made my Dragon Route project much easier.)

Eighteen or so lakes grace the urban sprawl of 1000-year-old Hanoi, with names that bring the map alive, like lake of the White Bamboo or Martial Art Training.

Then there is Hoan Kiem: the lake of the restored sabre. The lake that I’m looking at now. Hoan Kiem: The Lake Of the Restored Sabre

Scooters still roar around the outskirts beneath ribbons of paper lanterns. A woman sits near the low railings, sizzling sausages on a portable stove. A couple holds hands. Friends play Frisbee. A man prays.

At the Red River end of the lake, a scarlet bridge arches onto Jade Island where the Ngoc Son temple lives. The bridge goes by the name of Huc, which means morning sunlight, and which shows up the lack of poetry in the name of the London Bridge back home.

So it’s at the junction between morning sunlight bridge and  Jade Island  that I learn the story of the turtle…and the legend of the restored sword. Or sabre. The details are not that clear. The Legends of Hanoi

Years ago (back in the 15th century it would seem, when the Vietnamese were trying to drive the Chinese out of the country) a lowly fisherman was hauling in his catch for the night when an iron bar became caught in his net. Frustrated at this blade without a handle, he threw it away and went home hungry. The next night he went to a different section of the river. The same occurred again. Then came the third night and as the cock crowed he found the iron bar again. He lit a fire to better inspect this mysterious object and realised that instead of being a useless lump of metal, it appeared to be a sword.

Clasping it in his hand, he realised that this must be a sign from god to join the commanders in the fight to save his country. He abandoned his home and joined Le Loi’s army.

Later, as moonlit drifted over the weary soldiers, Le Loi himself noticed something glinting in the tents as he completed his night patrol. The fisherman showed him the sword.

“This is magic sword blade,” Le Loi replied. “It only lacks a magic hilt to match.” 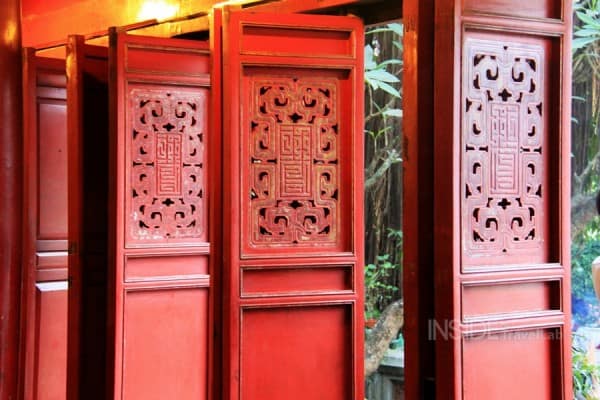 The Vietnamese weren’t having much luck against the Chinese. Defeat after defeat they retreated further into the forest. Resting on the branch of an old Banyan Tree, with who knows what running through his mind, Le Loi saw something bright: the glow of a phosphorescent centipede (a fantastic legendary creature, but, alas for me, not a dragon.)

Curiosity (and possibly slight psychosis induced by sleep deprivation and recurrent military defeats) prompted Le Loi to take a closer look. This was no day-glo invertebrate but instead the jewel-encrusted hilt of a sword!

He raced to see the fisherman, grasped the blade between his hands and thrust it into the hilt. It was a perfect match.

With god’s sword by his side, Le Loi battled valiantly against the Chinese, forcing them to surrender and leave Vietnam. Peace was restored and everyone lived happily ever after. Well, for a little while at least. Le Loi took a break from soldiering and started boating on Hoan Kiem lake instead (called Luc Thuy or Green Water at the time, since its water was, ahem, green.) One beautiful autumn day as lotus flowers studded the surface, one of the lake’s great turtles rose out of the water and addressed the king:

“Now that peace has been restored to the nation, please return the sword to our master, the Dragon King.”

With great humility and respect, King Le Loi lowered the sword onto the back of the turtle who disappeared, leaving only the sparkle of the sword behind. The lake was renamed Hoan Kiem… and I, at last, had found my dragon. The Lake At Sunset

A scent of petrol-laced blossom filled the air as I joined the other tourists to take photos of the temple. Across the lake, the water stirred and at the edges locals strolled and sighed.

I was surprised to find so many similarities to other stories from around the world. Three chances before the cock crowed. A magical sword to save a nation, plunged into or out of a lake. St Peter and King Arthur stood next to Le Loi as the light ran away from the day.

I, however, didn’t run. I walked as slowly as I could along the edge of Hoan Kiem and its gentle outdoor pace. Soon I would reach the corner and leave this part of Hanoi behind.

For all the different legends that drifted through the air, they all offered a sense of belonging and they all promised a sense of peace.

I took a deep breath of quietness. And then I turned the corner. This article is part of a series called the DragonRoute sponsored by Cathay Pacific UK.

Disclosure – I paid a reduced rate to stay at the Sofitel Legend Metropole hotel for review purposes. You can find out about that hotel, the bomb shelter and Graham Greene over here.

However, as usual, as always, I remain free to write about whatever I like on this site. That’s the way I like it and that’s the way it’ll always be. Otherwise…what’s the point?

What’s the most interesting part of the legend for you?

How to Spend One Day in Mumbai: A 24 Hour Itinerary

Places of Interest in Sabah: Rainforests, Reefs and the Ape with “the Soul of a Man.”

The Flower Markets of Bangalore: No Longer Invisible in India

The Gorgeous New Baglioni Showcases Curious Things to Do in the Maldives
How to Spend One Day in Mumbai: A 24 Hour Itinerary
Places of Interest in Sabah: Rainforests, Reefs and the Ape with “the Soul of a Man.”
The Flower Markets of Bangalore: No Longer Invisible in India
3 Easy Malaysian Recipes Learned in Borneo