The Szechenyi Baths in Budapest

The steam rising out of the drain cover caught my attention first. It was a cold, vengefully cold mid-winter morning in Hungary as I paced along the tarmac, limbs mechanical yet numb, face frozen, eyes rimmed with weather-induced tears.

Everyone was cold. I saw it in the hunched shoulders and stooped spines of the commuters who huddled past, bundled beneath thick duffel coats, pressed scarves and peaked hats.

Which was why the drain surprised me.

Whimsical fingers of mist curled through the gaps, growing thinner as they spiralled up towards the sky, the sky which experience told me still loomed overhead but which I avoided looking at in case I inadvertently exposed another sliver of my neck to Budapest’s biting air.

No, these wisps of steam alone could tell me that I was on the right track, that my heavy, hurried feet were carrying me towards the Szechenyi Baths. Thermal baths are to Budapest what baguettes and boulangeries are to Paris or yellow taxis are to New York. From the Szechenyi, to the Gellert, to the Lukacs, a range of extravagant, resplendent buildings reside on both the Buda and Pest sides of the city, plunging beneath the earth to draw up thermal waters for the benefit of cleansing and healing its citizens, not to mention providing the necessary environment for a game of chess.

Thanks to the lovely people at the Budapest Tourist Office, I’d been granted the right to take photos within the Szechenyi Baths. No thanks to the hideous behaviour of one woman at the admission gate, most of that time was lost. A story for perhaps another day, despite its insight into life before and after the fall of the iron curtain and the interesting debate about clothing, steam and near freezing temperatures.

Eventually, I was in – and the clock was ticking. I raced through the subterranean changing rooms with their peeling paint and faint sense of psychiatric prisons from films of the 1950s. I strode through the exercise rooms with skull-capped water aerobics classes that reinforced that impression. I threw those ubiquitous swimming hats for shoes across my feet and burst into the fresh air of the central area of the Szechenyi Baths…

That reedy steam I’d seen clawing through the drainpipe outside now billowed and bellowed across the outdoor pools, cloaking and claiming swimmers who soaked in its scorching path, not to mention the stony Venus who twisted her spine around to watch.

Here in the heart of Hungary, I watched thermal water turn to vapour in the home of Budapest’s oldest thermal bath (on the Pest side of the city at least.)

And while cold air turned my rapid breath into clouds, I found a place for playing chess. 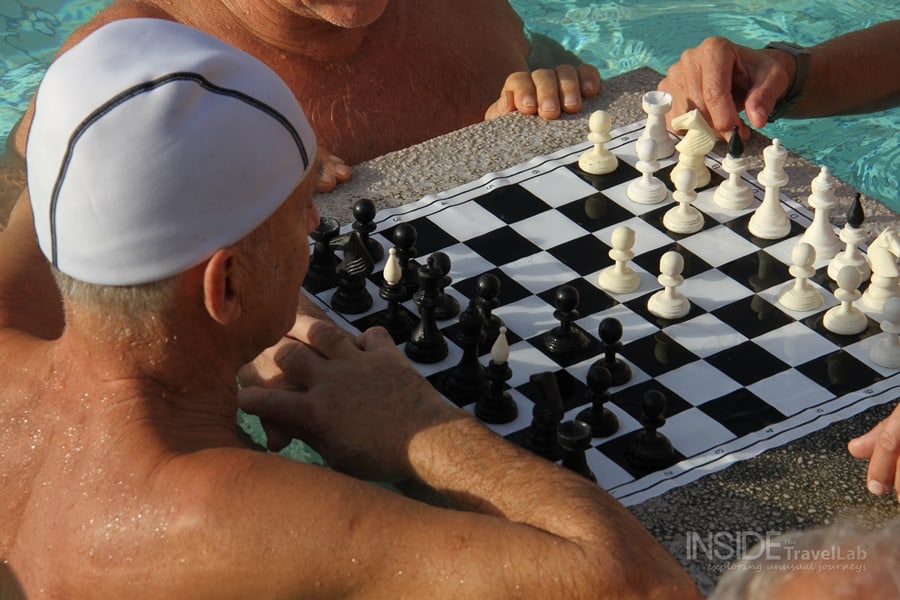 It also forms part of the #IronRoute project – a journey from Istanbul to Berlin that criss-crosses back and forth across the former Iron Curtain. Read all about it here. Wieliczka holds an underground secret: pure beauty. Here's what it's like to END_OF_DOCUMENT_TOKEN_TO_BE_REPLACED

Merging whimsy with grit, Budapest fires the imagination and fills the camera END_OF_DOCUMENT_TOKEN_TO_BE_REPLACED

What is Latvia famous for? This small but significant Baltic state squeezes END_OF_DOCUMENT_TOKEN_TO_BE_REPLACED