Traditional Welsh Food: The Five Dishes You Need to Know Traditional Welsh food hides in plain sight. Against a backdrop of the classics, like bara brith, cockles and welsh cakes, Wales welcomes new flavours these days. Here are the traditional Welsh dishes you can't miss, plus an update on what's new on the foodie scene.

Talk about Welsh food and most people draw a blank, even if they’re from the UK.

Hard pressed, they’ll come up with leeks (more an emblem than a dish.)

Laverbread (hey, it's something to do with seaweed!)

Or cockles amid the laverbread, harvested from the southern coast around Swansea.

If you're on a roll (ignore the pun,) let's talk about Welsh rarebit, albeit often mislabelled as cheese on toast.

And if they're feeling really fancy, you might hear about juicy lamb and slow-cooked cawl to boot. Recommended reading: What you need to know about food tourism

Well, it's time to change the record. A a local in search of good bites to eat, it's high time I wrote about traditional Welsh food.

And the gastronomic revolution that’s been quietly gathering pace in Wales.

The truth is that the food scene in Wales... is now cool!

Cawl (pronounced COW-el) rounds up wild garlic, leeks and welsh mutton and lamb from the Black Mountains. It can take all day to cook and belongs just as much to modern day gastro emporiums as it does traditional olde housewives. Authentic, heartwarming stuff.

Is it a stew? A soup? A casserole? All of the above, mostly at the same time.

One thing’s for sure. It’s pronounced cow-l not call. Now you can boldy go forth and ask for some more!

Inside Tip - head on the cawl crawl each year in Carmarthenshire, west Wales. Buy a ceramic cawl bowl at the start and taste a ladleful at each of the participating pubs and restaurants. Delish!

Flat, crumbly and speckled with raisins, Welsh Cakes seem less cakey than their English counterparts. But why does everything have to be compared to England?

They're probably the best known traditional Welsh food and I'd guess that half the reason for that is the fact that Welsh is in the name! You cook them on a cast-iron griddle or bakestone. Confession time: I bought such a stone but haven't used it yet. The thing is so heavy I fear an A&E visit if I accidentally drop it on my foot.

Welsh cakes typically come with a nice cup of tea and a sprinkling of caster sugar, but you can add butter or jam or eat them with coffee if you're feeling rebellious.

As a side note, they travel well and make for great souvenirs and gifts.

The only one I've ever had that I enjoyed came as part of a full fried breakfast.

Swansea cockles, on the other hand, tickle my tastebuds their vinegar tang. Fears that the Cardiff Market cockle supply would falter during my pregnancy cravings proved to be false, but I reckon things came close.

Succulent and slightly sweet, Welsh lamb deserves its widely held reputation as a gourmet dish from this part of the world. Sheep have a lot of space around here, with parks galore and very few cities.

Recommended reading: Felin Geri Luxury Glamping in Wales – What to See, Do and Pack

We're back to bread again with this dish - and yet we aren't. The words mean "speckled bread" but this is more of a rich, fruit cake darkened by soaking in tea. It's not too sweet and typically comes sliced with salted butter. Lush.

It's no exaggeration to say my grandmother used to make this, often, and I looked forward to it every time. For some reason, bara brith seems more scarce than Welsh cakes. Perhaps because it tastes so good, the Welsh don't want the secret to get out.

Recommended reading: 21 Fun Things To Do in Cardiff, Wales (A Local’s Guide)

Cheese on toast this is not. There's more to it than that (albeit, not all that much more :-) )

The topping is based on a cheese sauce, with a dash of mustard and butter and then ingredients as the chef requires. Egg, worcestershire sauce, Brains, Guinness... all have made it into this dish.

It works as a light lunch or Sunday brunch, rather than the main event.

Gone are the days when nothing but weak tea and stale scones filled the green-black hills and rugged coasts (well, partially gone.)

No, these days even Londoners manage to break free of their city cage to travel west in search of good Welsh food.

Blasus Deli: Great Deli in the Heart of Carmarthen

Inside, it creates a visual treat before moving on to the edible, combining local specialties like Caerphilly cheese with roast cherry tomato salsa from Italy.

I chose a crayfish baguette and munched it in the shade of a castle. Now that's a welsh way to have lunch.

(Pssst. I think you pronounce it Bl-eye-ss.)

The Forest Arms: Welsh Tapas in A Cosy Stone Pub

Reach the 6th century village of Brechfa by day and work up an appetite by walking in the countryside nearby. 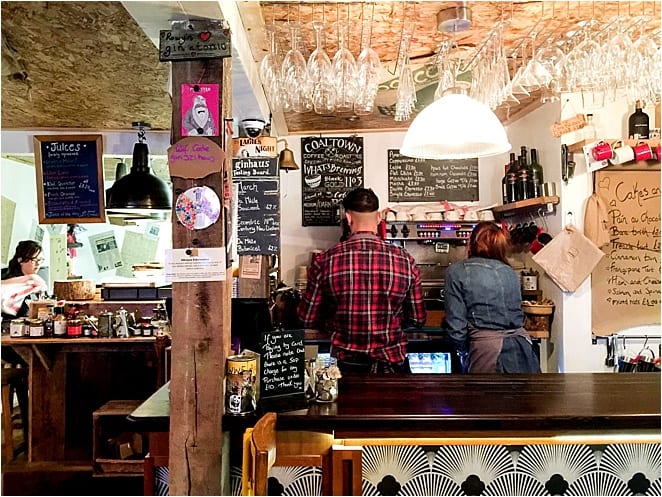 The Ginhaus: Floor to ceiling with gin (er, and some food)

LLandeilo. People say the Ginhaus stocks over 240 types of gin but the owners are not amused.

Close to the National Botanic Garden of Wales, Wright's Food Emporium made it to the Observer's foodie hit list and has never looked back.

Wander the aisles of this Victorian market, following your nose to the traditional Welsh cuisine, artisan coffee and street food.

This is an ideal spot to buy Welsh treats and local delicacies all in one place. The Market is open Monday to Saturday from 8am until 5.30pm.

I have worked with several partners in Wales as well as travelling under my own steam.

However, throughout, as ever, as always, I kept the right to write what I like. Otherwise, what is the point?

To celebrate the soft hues of autumn and freedom from lockdown, we END_OF_DOCUMENT_TOKEN_TO_BE_REPLACED