Beshbarmak is the national dish in Kazakhstan, with a name that pleases the ears as much as the stomach. Here’s what you need to know about this mighty feast of a meal. We sat, gathered around the low table in Zhanbolat’s home in Türkistan while he gathered his thoughts about his philosophy of what food means in Kazakhstan. Sugar and gold glittered beneath the lights of the shanyrak and mounds of dried fruit, baklava and mini snickers bars waited on the decorative dastarkhan.

Gulzira, his wife and local maths teacher, poured tea from the Russian samovar to complete what we had shared as the main meal: the beshbarmak.

We sipped tea. And Zhanbolat shared his conclusions. So, we can sit and talk about the ingredients of beshbarmak. Talk about the boiled noodles and carrots, the chyk onion broth and the cuts of either sheep, lamb or horse meat, with kazy sausage thrown in for ultra special occasions.

But the real essence of beshbarmak involves the sense of theatre, the song of collaboration and the joy of a true feast shared with strangers and friends.

Beshbarmak is not the kind of meal people throw together at the end of the workday while they’re in a rush. It’s something that’s designed to be shared and celebrated, with a ritual involved every step of the way.

And the word beshbarmak literally means “five fingers,” making it an intriguing culinary offering right from the start. Our beshbarmak host in Kazakhstan

First, there’s the name. Why is beshbarmak known as the “five fingers” dish?

Well, Kazakhstan has a rich and diverse history and people. But one of the strongest cultural legacies involves the lifestyle of the nomadic tribes, whose day to day struggles underpin most of the rituals behind the meal. After all, nomads like to travel light. And the more things you have, the longer it takes to pack up and the more difficult it is to move around.

Hence, the traditional Kazakh table is low, so that you don’t need chairs. And you eat the meal with five fingers, to save on needing cutlery. Slices of kazy sausage in the beshbarmak dish

The Guest of Honour

The most important guest used to sit furthest from the door. In a traditional yurt, this position would offer the most warmth and shelter from the wild winds of the steppe and it would also be the safest place from marauding attacks in a place that knew the reality of the likes of Genghis Khan.

Next up, this most honoured guest would receive the biggest hunk of meat. And as if to emphasise the point, Zhanbolat dropped a chunk of meat the size of a skull onto my companion’s plate.

You’ve never made it until you’ve made it into an historical history book! In this case, Kazakhstan’s national dish features in both Kniga o vkusnoi i zdorovoi pishche and Natsional’nyie kukhni nashikh narodov. So, you know.

An Eye for an Eye?

Next up, other meat parts are divided according to character. So, a good listener may receive the ears. A bad listener may as well. The fastest runner might receive a slice of leg and so on. The spine, or omurtka, is reserved for children.

With no refrigerator in the old fashioned way of life, there was no time nor place to be squeamish and wasteful.

Luckily, the edges of these traditions have smoothed over as populations moved indoors. And despite reading about and hearing about this practice in advance, the fabled sheep’s head was not passed to visiting guests. What does Beshbarmak come with?

Served in beautiful kese bowls, the appetiser involved shorpo, a light and salty mutton broth. After the main beshbarmak, sliced up by the host and dvided into portions, we received ak-serke broth. This comes with kumis, a fermented camel milik drink, along with a slice of lemon. The aim is to settle the stomach after all that meat, but as someone with lactose issues, I sipped as slightly as politeness allowed.

And moved onto the sweeter snacks. The kurt, the dried fruit and the navat sugar crystal block.

But that’s a story for another day. Quite literally. Come back soon, for more on the fascinating Kazakh cuisine. Sadly, I don’t think it’s possible to repeat the full beshbarmak outside central Asia. But you can have a pretty good go! Well, tradition says you scoop it up with your five fingers. But, really, it’s fine to use a fork. That’s what happened during our homestay visit, anyway!

As you might expect, you’ll find versions of the Kazakhstan beshbarmak across the neighbouring countries in Central Asia. In Uzbekistan and Kyrgyzstan, you’ll find a similar dish by the same name. In Turkmenistan and the North Caucasus, it’s known as turama or dograma. You’ll hear the name kullama in Bashkortostan and Tatarstan. And, most different of all, linguistically, is naryn in Xinjiang,

Read more about food across Asia 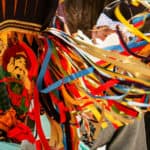