Finding Where to Eat in Lisbon

Breathless, sweaty and most definitely ready for food, I pushed open the glass door and stumbled inside.

“Are you still serving?” I asked, the words more direct than usual.

A man walked towards me, in black against the white walls, varnished wood and chic-hipster vibe I’d pretended to ignore in case we didn’t fit in.

“But of course,” he replied, before spotting the pushchair and paraphernalia behind me.

“Oh…” he took a breath and paused. Seems I was right to be worried. But then things continued.

“Perhaps you’d prefer to sit by the box of toys. She can use our trike if you’d like. It used to belong to my daughter.

And so our heartwarming journey into finding where to eat in Lisbon began. Where to eat in LIsbon

Café Versailles – yes, it has a French vibe and we’re talking about eating in Lisbon but it’s an atmospheric haunt and beloved by loyal locals. Pastries galore, character in fin de siecle abandon. Find Pastelaria Versailles on Avenidas Novas.

A Padaria Portuguesa – Am I recommending a chain? Yes, indeed I am. A chain it may be but it’s certainly a Portuguese chain that provides plenty of Lisbon restaurants where locals eat. A good stop for breakfast or a mid morning snack. Found throughout the city.

Tivoli Avenida Liberdade Hotel – for the view. The breakfast buffet is top notch but it’s the view that steals the show. Found on Av. da Liberdade 185, 1269-050 Lisboa.

Cervejaria Ramiro – near Independiente. The queues were like Oxford Street on Boxing Day so head here early and be prepared to wait! Recommended by Eat Like A Girl and Celia Pedroso, it's rumoured to serve the best seafood in Lisbon. Av. Alm. Reis 1, 1150-038 Lisboa.

Prado – lots of fresh vegetables, often a novelty when eating out in Portugal! Recommended by Food and the Fab. Find on Tv. Pedras Negras 2, 1100-404 Lisboa,

Graca 77 - fresh vegetarian food and azulejos tiles, with a spectacular view from the square outside. Largo Graça 77, 1170-165 Lisboa. Watch Out for Opening Times

This wasn’t how it was meant to be, of course.

Relishing a few days in the foodie city of Lisbon, I’d scribbled suggestions, pinned pictures, insta-ed instagram and whatever else we’re supposed to do before taking our taste buds anywhere.

I had the additional perk of knowing not one, not two but three food writers familiar with the city and, quite literally, ran into a woman who wrote the book on travel and eating out in Portugal only a few weeks before.

So where did I go wrong? Opening times, that’s where.

Where to eat tip: Lisbon is not a 24 hour city and that's part of its charm. Most restaurants serve dinner between 8 - 11pm although you may be able to dine earlier in some of the hotels.

!Read Unusual Things to do in Porto here

Book Ahead or Drift By?

Or perhaps the blame lay in swapping my natural happy-go-lucky traveller vibe (optimistic description - Ed) in favour of something more organised. Still. I had a hungry toddler on my hands and a list of recommendations that ended in closed doors.

Until now, at Banca de Pau, a tapas-oriented restaurant specialising in food from Tras os Montes in the north near the Douro valley.

Where to eat tip: many restaurants in Lisbon don't have websites and it can be difficult to book ahead. Part of the game, part of the game!

There comes a level of exhaustion and hunger when everything tastes good. Thankfully, we weren't there yet.

But good the food did taste, brimming with top ingredients, minimally messed with.

We ordered bread, olives. Tomato salad with vinaigrette and toast with pistachio.

And it turns out there really is such a thing as green wine (vinho verde from the Minho province in the Portugal's far north.)

Faith and full belly restored, I was ready to try again. 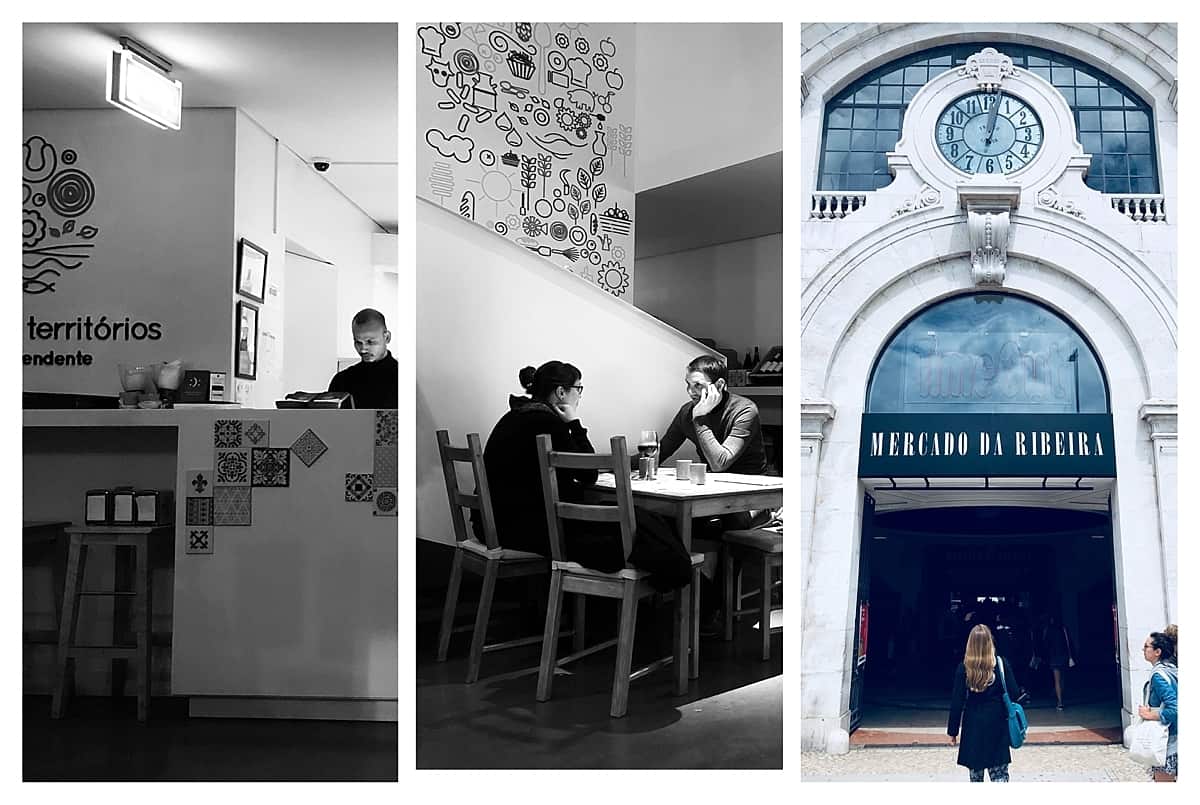 Where to eat in Lisbon: The Famous Food Spots

The Cool Cat Time Out Market

It has an ear for a zingy slogan and an eye for a cool ideas: showcasing the city's different flavours beneath one roof and with one aesthetic. Stalls use matching fonts on monochrome fabric and diners throng on shared tables in the centre of the hall. This characterful commotion made life difficult with a baby, but the playground gave us other options.

Another staple on the foodie scene is the home of the first pastel de nata, the Pasteis de Belem.

Even for non-pastry lovers like myself (I’m even “meh” about croissants,) they won me over.

The pastry is light yet tough, the filling delicately flavoured.

You’ll find them everywhere, now, from fine dining establishments to chain kiosks on the underground and it seems chefs can't go wrong.

But Pasteis de Belem is the famous one and rumoured to be the best, so if you have an appetite for queues and a hunger for pasteis then fire up your Google Maps and go. Where to Eat in Lisbon with a View

As you'd expect from a city clustered around seven steep hills, Lisbon excels in vistas and rooftop bars.

Cocktails and A Slick Skyline

The Sky Bar is open to all, serving cocktails like the Snowberry with port, lime juice, egg white and cinnamon. The sea glittered to order on the horizon and the leaves of Lisbon's “Champs Elysees,” Avenida Liberdade, fluttered with self-conscious glamour below. It’s a bright white, cool cat kind of a place, with light bites to match.

Take a tram or steep stride uphill to Jardín de São Pedro de Alcântara. This beautiful viewpoint in Bairro Alto comes to life in the evening with a series of food stalls and music where locals and tourists mingle alike.

Vegetarian Graca 77 captures this through its watercolours but wears the 21st century in its reinterpretation of Portugal’s trademark azulejo tiles. You won't actually get the view from the eatery, but from the square just outside. The local flavours make it worth making a journey for, where streets are even narrower, even steeper, even more cobblier than the rest. Don't miss the Caldo Verde on the menu, a classical cold green soup with collard greens, sweet potato, onion and garlic. Found at Graca 77, Largo Graça 77, 1170-165 Lisboa The Best Part About Eating in Lisbon

I keep coming back to that tomato salad at the Banca de Pau.

With its fresh, great flavours and the man who lent his daughter's trike.

It was like finding friends in the city. An experience so good we went there twice, once bringing our Lisbon-local friend with us.

And the whole thing reminded me of a long-held truth: no matter how hard you plan,  sometimes it pays to make mistakes.

And that it's the people that make up the best in everything. If working out where to eat in Lisbon seems like a lot to do in a little time, then consider taking a food tour. Not only do you find delicious places to eat, you'll also learn a great deal about the city and the Portuguese as you go. They're also easier on the stomach than full tasting menus every day.

Culinary Backstreets run a range of Lisbon Food Tours. Look out for the one by Celia Pedroso - her recommendations have never let me down! Devour Lisbon also run food and culture tours in the city.

What to Eat in Lisbon

Inside Tip: Ovelha Curado and Presunto

Commonly brought out while you choose your main dish, the tangy cheese ovelha curado and its sidekick presunto ham taste amazing but come with an irritating trait. They’re presented as though they’re a gift from the chef but actually there's a hefty fee.

On the rebound from my pregnancy soft cheese ban, I relished every chance I could get. If that's not you, however, then speak up the moment it arrives to send it back.

Bookmark this guide on where to eat in Lisbon on Pinterest and have it ready for your next trip! What did you think about this guide on where to eat in Lisbon? Anywhere to add? We'd love to hear about it!

I spent a few days in Lisbon with my family and then travelled north through Portugal. As ever, as always, I kept the right to write what I like. Otherwise, there’s just no point. For all the pastries in the world. Some of the other recommendations were hosted, some were not, but all were only included because I like them and would gladly do them again.

Wondering how to get off the beaten path in Spain? We have END_OF_DOCUMENT_TOKEN_TO_BE_REPLACED

Wondering how to spend one day in Graz? We have the itinerary END_OF_DOCUMENT_TOKEN_TO_BE_REPLACED