Looking for cool and unusual things to do in Porto? Welcome to our collection of unique activities found around Porto's terracotta maze. Cool Things to do in Porto Cheat Sheet 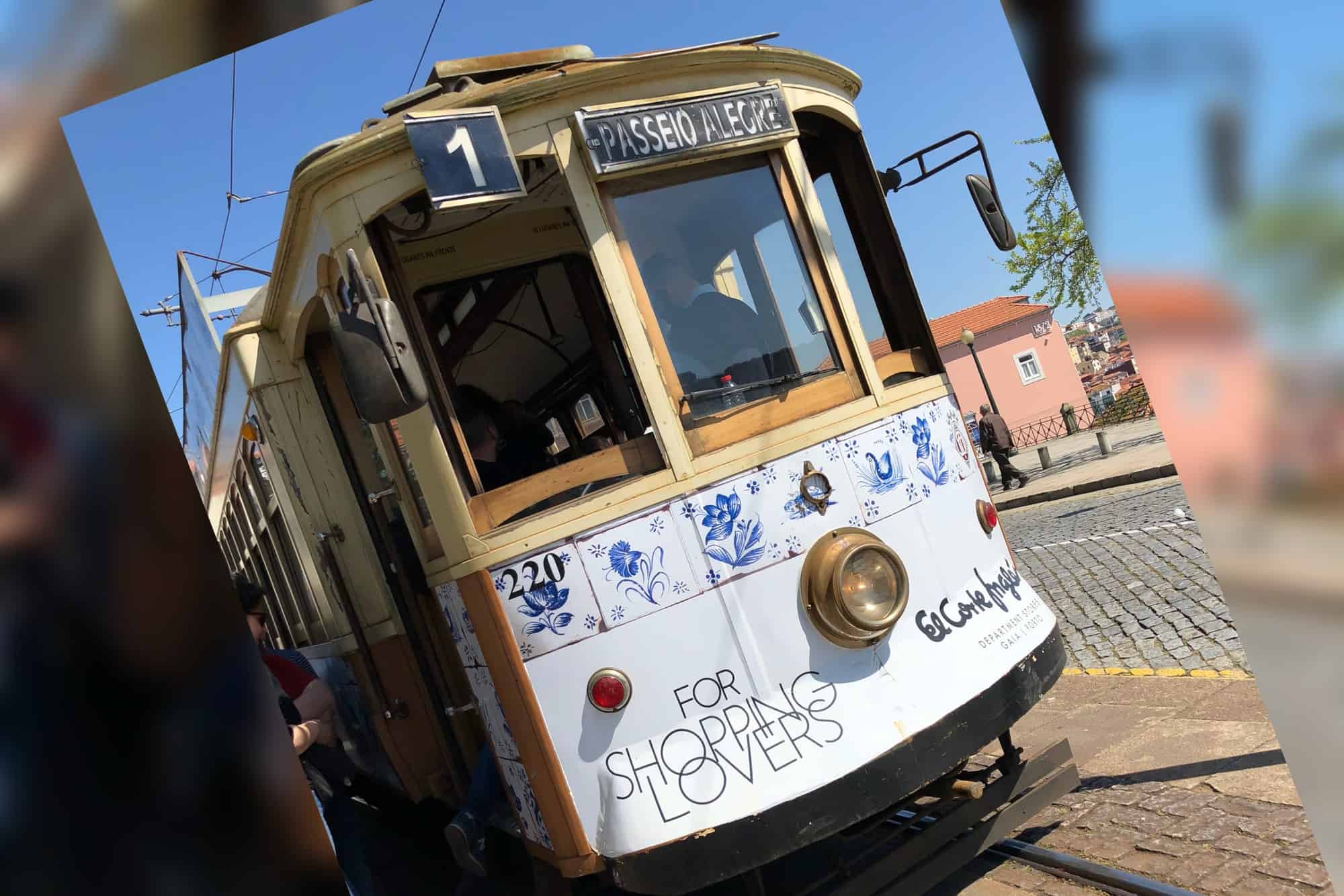 Cool and Unusual Things to do in Porto

Ah, pretty city Porto, you beautiful place, you. All glowing in from dawn til dusk in a tumbly, jumbly terracotta haze and reflected Harry Potter glory.

With your giant gondolas from the port trade, your azulejo tiles and your steep streets to a thousands scenic viewpoints, you wear your prettiness with a bit of grit. A boot in the substance vs style side of the debate.

But what about the unsightly? Or the downright ugly but still important?

Never fear, I am here!

Let’s gloss over why I feel the need to do this (something in common perhaps?) and talk for a while about all of the things there are to do in Porto, pretty and otherwise.

Porto, One of the Hottest Cities in Portugal

Porto, like so much of Portugal, combines atmospheric architecture from the past with modern life in Europe (and some seriously tasty pastries.) Surrounded by skaters, the Casa’a swerving walls of white and glass play with the idea of perspective. Inside, the vision of Dutch architect Rem Koolhaas becomes even more clear – and cool.

Nine storeys of an asymmetrical polyhedron blend and dip sound and sight through mirrors, open spaces, closed stairs and concrete.

Often described as Porto’s “Guggenheim,” a term with which I wouldn’t quite agree, there’s no doubting that the main art form here is music.

It houses Fundação Casa da Música and provides a base for no fewer than three orchestras: Orquestra Nacional do Porto, Orquestra Barroca and the Remix Ensemble.

If you can’t manage to catch a concert, follow my lead and chill out in the delicious basement café. Watch skaters create a different art form using the physical slopes of the wall and mingle with artists in between rehearsals. 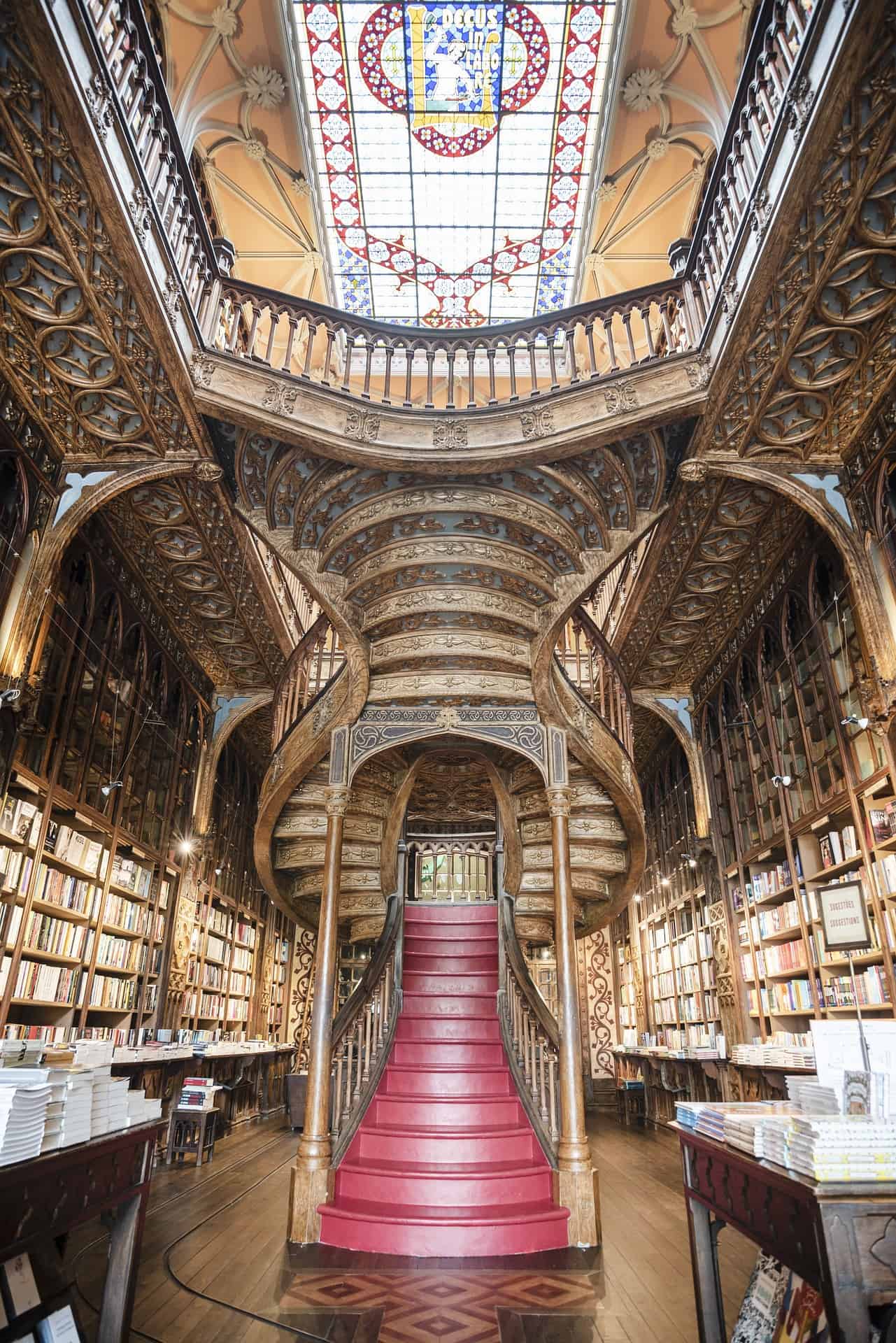 All smoky-dark wood, twisting staircases and mystical promise, the charms of the Livraria Lello bookshop helped to inspire J.K. Rowling's Harry Potter. Or so the story goes.

A neo-gothic interior awaits behind an Art Nouveau facade and as a result, it's part bookshop, part spooky kind of church. Browse beneath a stained glass ceiling bearing the motto Decus in Labore (honour in work) and look out for the monogram of "Lello and Brother" amid the plants and geometric shapes.

Lello regularly ranks as one of the most beautiful bookshops in the world, as well as one of the most interesting and unique things to do in Porto. Consequently, after trading in relative oblivion since 1906, it now draws a crowd.

Book tickets in advance or queue for your instagram moment unless you travel to Porto in the off season. São Bento train station may not seem like an obvious choice. But once inside, you'll realise why it's adored as one of the best unique things to do in Porto.

Blue and white ceramics rise to the sky in the main atrium, a cool reminder of Portugal's place as a world leader in azulejos ceramics.

I wonder if he could have imagined the sea of selfie sticks that now flicker ahead of his dreams?

São Bento lives in the historic centre and UNESCO World Heritage Site area, so it's easy to combine with a visit to Ribeira, the Dom and across to the port wine cellars. For over 40 years, O Buraco has served up traditional, authentic Portuguese fare in an unpretentious setting. The name translates to the rather unappetizing "the hole" but after that, things improve.

Pork chunks with tripe, boiled blood and roast potatoes live on the menu alongside fish empanadas and duck with rice. All are hearty main dishes, with the odd pickle to lighten the palate.

Reminiscent of an old working man's club, it's a friendly spot for solo women travellers and a welcome break from the touristy spots found closer to the river. 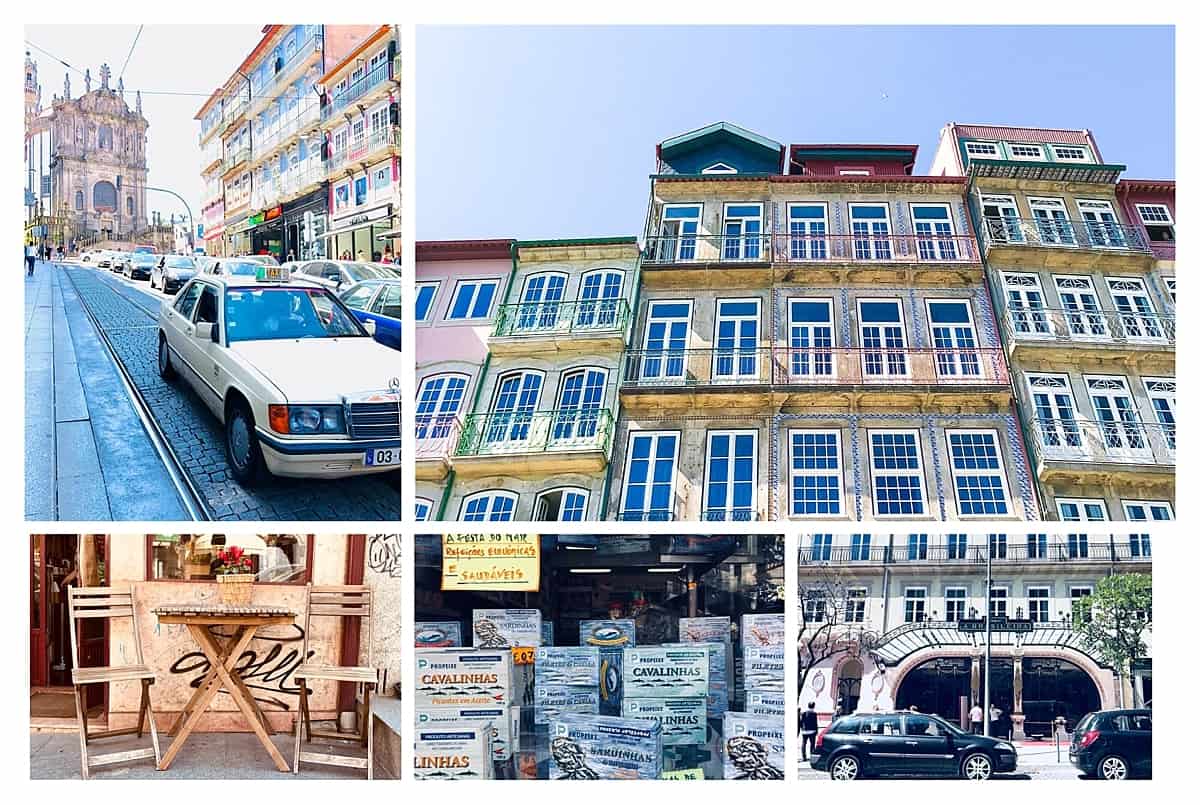 At the other end of the architectural scale is Porto’s historic Ribeira, part of the city’s UNESCO World Heritage Site Centre.

Like the Casa da Musica, there’s no mystery in the name.

Ribeira means riverside, which is where you’ll find the district.

But the river in question, the Douro, carries a little more mystique when it comes to the details of its name.

One translation of Douro means “river of gold” and on a gilded summer afternoon, the water does appear to shimmer that way.

It's definitely unique to Porto, but a stroll along the riverbank is hardly one of the most unusual things to do in Porto. All the world and her husband have thought of the same thing to do, it's simply that beautiful.

But it's surprisingly easy to escape the crowds and find a non-touristy spot. Just let your feet lead you up and down, in and out, through and around the twisty streets that lead up from the river and you'll be on your own soon enough. 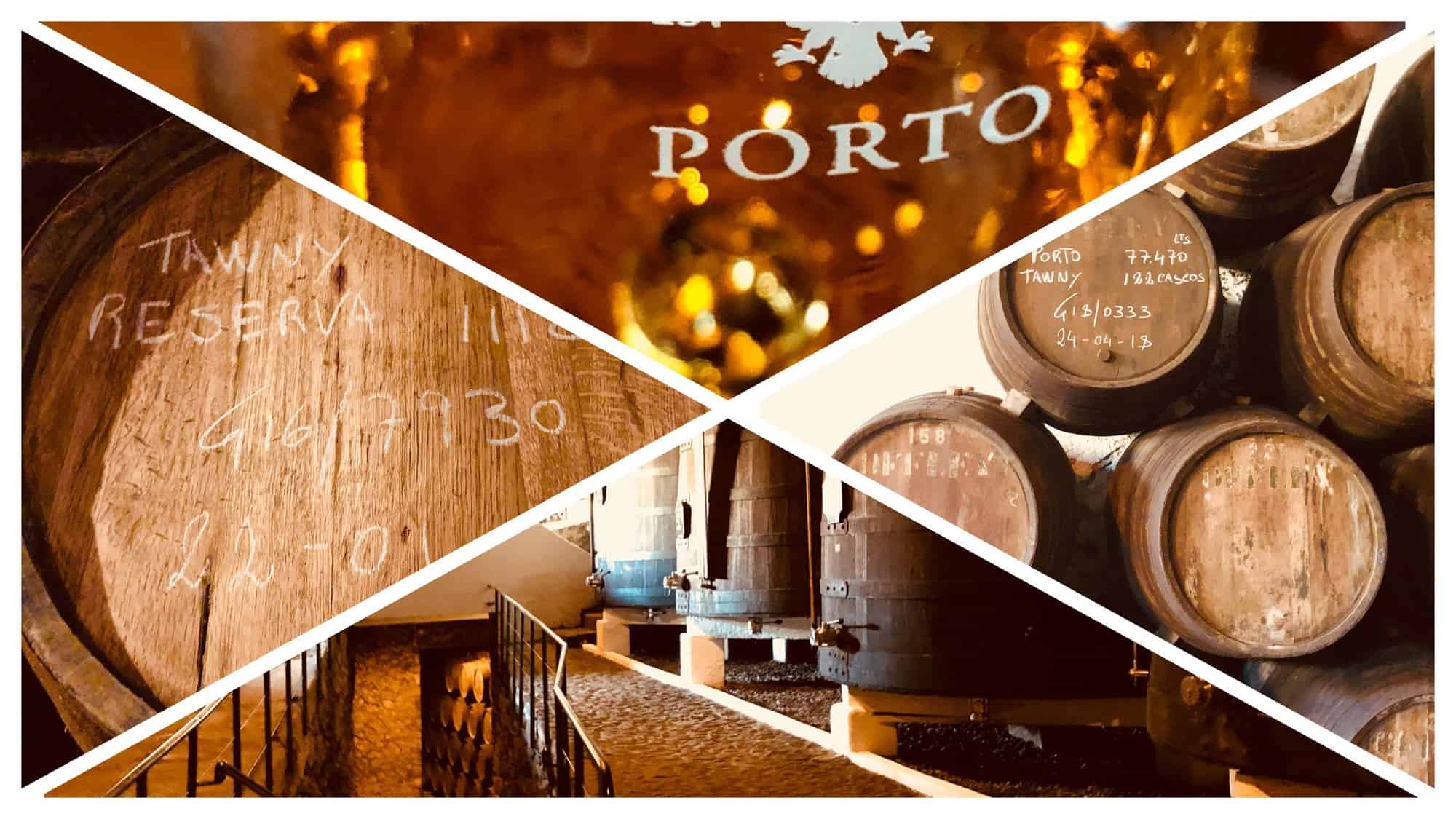 Running for more than 200 miles, the Douro River may begin in Spain, but its climax is unquestionably Portuguese.

The port-wine lodges (they should be called porteries!) process visitors with precision: herding queues through cool dark vaults, clinking port into tasting glasses and propelling port-hazy visitors back out to the sun with a wave and a price list.

If you have time, take a trip up the Douro to the port wine country and the landscape away from the city. If not, a visit to the stained barrels and cool interior of the port wine lodges is one of Porto's signature things to do.

Vila Nova de Gaia - The Wrong Side of the Tracks

It's one of those curious things, but those cellars and their port barrels actually live on the wrong side of the tracks in the Vila Nova de Gaia. Known simply as "Gaia" to locals for obvious reasons, it is actually a city in its own rights. And all that port, therefore, doesn't actually reside in Porto city (though it is Porto district, if you are interested in all the details!)

Gaia, while less postcard pretty than Ribeira across the water, has attracted some phenomenal street artists over the years. As a result, you'll find an ever changing open air art exhibition as one of the best things to do in Porto's non Porto part.

Side note - many day trips along the Douro Valley also depart from Gaia. Porto and The Dom

Constructed in 1886 to connect town with industry, the Dom Louis I bridge in and of itself, it isn’t all that pretty.

But the height of the arc and the gorgeousness of the gorge it stretches across makes none of that seem important.

You can walk over it. You can metro over it. If you come to Porto by train (as I did, from Coimbra) you can glide metal over metal over it, spilling Porto’s prettiest landscape into view before you’ve even arrived.

And at the time it was the built, it was the longest of its type in the world.

Not often one to fall in love with a bridge, with Dom Luis I was Juliet to Dom’s Romeo, Torvill to his Dean, Beavis to… No, wait, I think I’ll leave it there.

In short, it was love at first sight.

Make sure you walk over it, at least once.

As a sure sign that Porto is on the up, the Serralves Museum and Cultural Centre ranks as one of the top 100 museums in the world.

Opening in 1999, it reshook the landscape of art in Porto, helping to move the city into world of contemporary art and future design, as well as relishing its past. It mixes Art Deco and Modernism in its architecture, designed by Álvaro Siza Vieira, and is a cool place to visit in Porto on a humid afternoon. THE BEST THINGS TO DO IN PORTO: ENJOY THE UNIQUE ATMOSPHERE

On Friday afternoons, buskers make sweet music in the shadow of the Dom and on pretty much every day through the summer, revellers float beneath his curves to travel upstream to the verdant Douro Valley.

Back in the narrow, shaded streets of Ribeira, the pace of life seems as loud or as quiet as you’d like it. While the Dom and the Casa strike a pose, the joy of Ribeira is found in the smaller, quieter details.

Sure, it has its masterpieces, like the Sao Francisco church. But it’s the faded shutters, peeling posters and clean laundry hanging from small stretches of string that signal that time here is to be protected, that time here is special.

Porto has undergone a renaissance over the last few years. J.K. Rowling was inspired here, the European Capital of Culture award landed here. 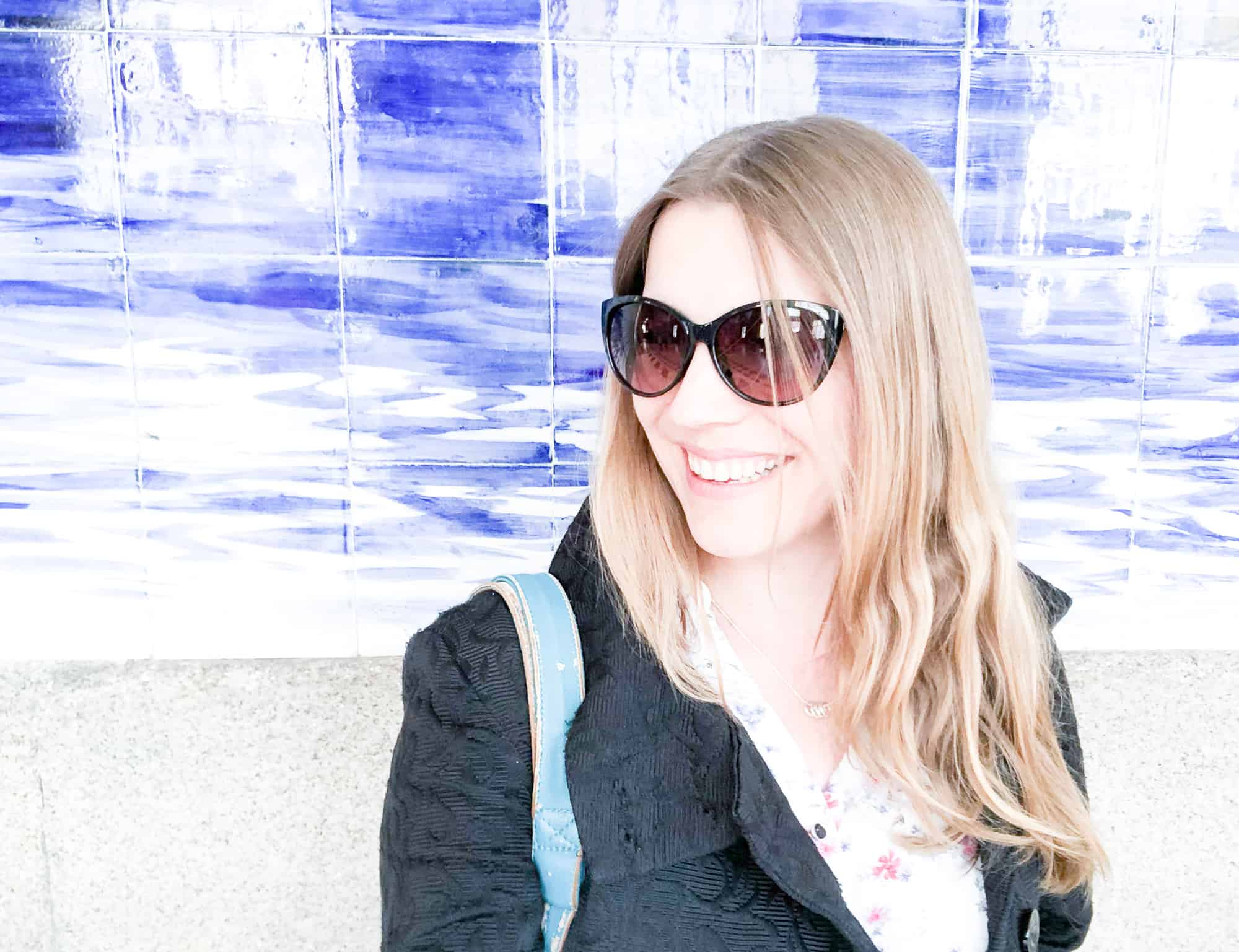 And it’s easy to become overwhelmed by its postcard-pretty beauty.

By its enviable and unenviable current position at the height of travel fashion.

But there are plenty of not so pretty things to see and do in Porto, too.

And when you catch sight of the Dom, say hello from me. 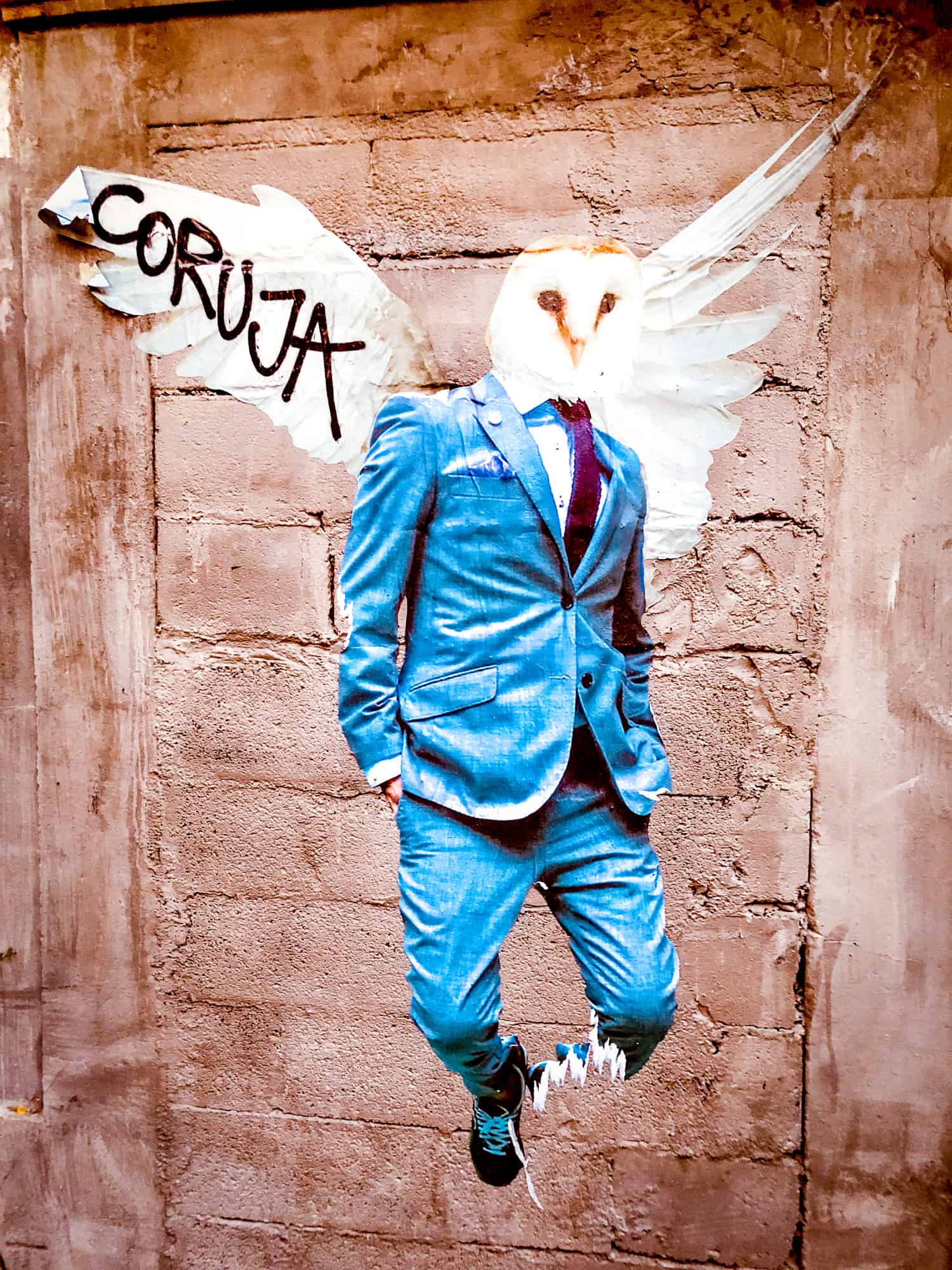 Enjoyed this article on unique things to do in Porto?

Why not bookmark on Pinterest ready for your next trip to Portugal. 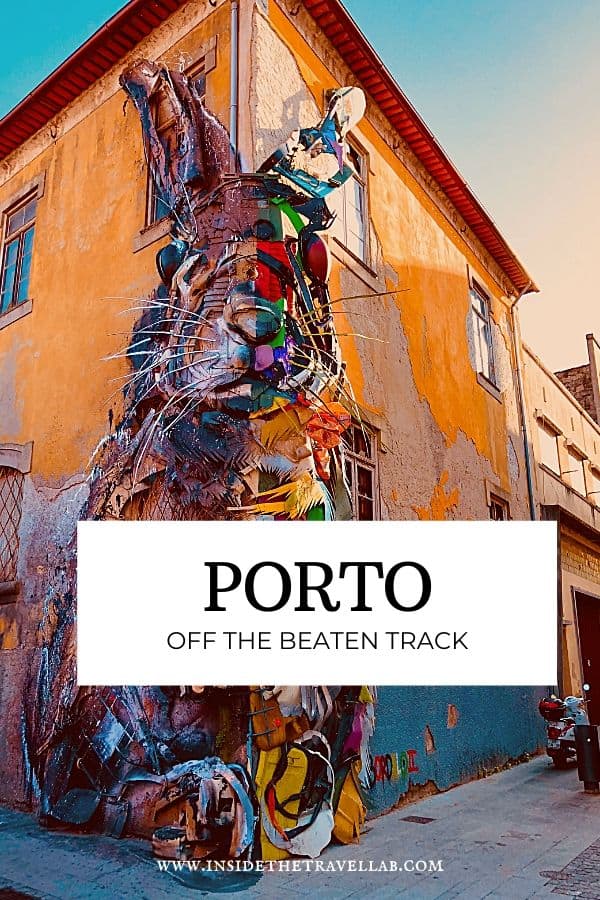 Disclosure - I travelled through Portugal on the Highlights of Portugal tour as part of my work with Lonely Planet and G Adventures. As ever, as always, I kept the right to write what I like. Otherwise, there’s just no point. For all the pastries in the world. Some of the other recommendations were hosted, some were not, but all were only included because I like them and would gladly do them again. Wondering how to get off the beaten path in Spain? We have END_OF_DOCUMENT_TOKEN_TO_BE_REPLACED

Wondering how to spend one day in Graz? We have the itinerary END_OF_DOCUMENT_TOKEN_TO_BE_REPLACED