Looking for what to do in Triana, Seville? Welcome to the intoxicating district that runs along the wrong side of the tracks on the Guadalquivir River. A world of markets, ceramics and great views await. Simply put, it’s one of the best things to do in Seville.

Triana works well as part of this southern Spain itinerary through Andalucia. Things to do in Triana Seville

What to Do in Triana Seville

When I used to live in Seville, Triana was my favourite neighbourhood. Perhaps because it used to be “the wrong side of the tracks.” Perhaps because of the spirit of exploration, the former home to the sailors who set off to find the so-called New World.

Triana scorches like a spotlight when it comes to local tradition. You’ll find cafes and bars, religious processions, ceramic workshops and, well the Inquisition.

Here’s your  guide to what to do in Triana. Plus, a travel story…

A Handy Guide on What to do in Triana, Seville

If you’re short on time, cross the Puente Isabel bridge to Triana for a morning or afternoon. As long as it’s not too hot, you can cross off most of the highlights pretty quickly.

But if you have time, spend a day here, moving slowly, following the crowds, holding the ceramics and pondering the history…And make sure to spend plenty of time people-watching with locals from the comfort of the tapas bars. 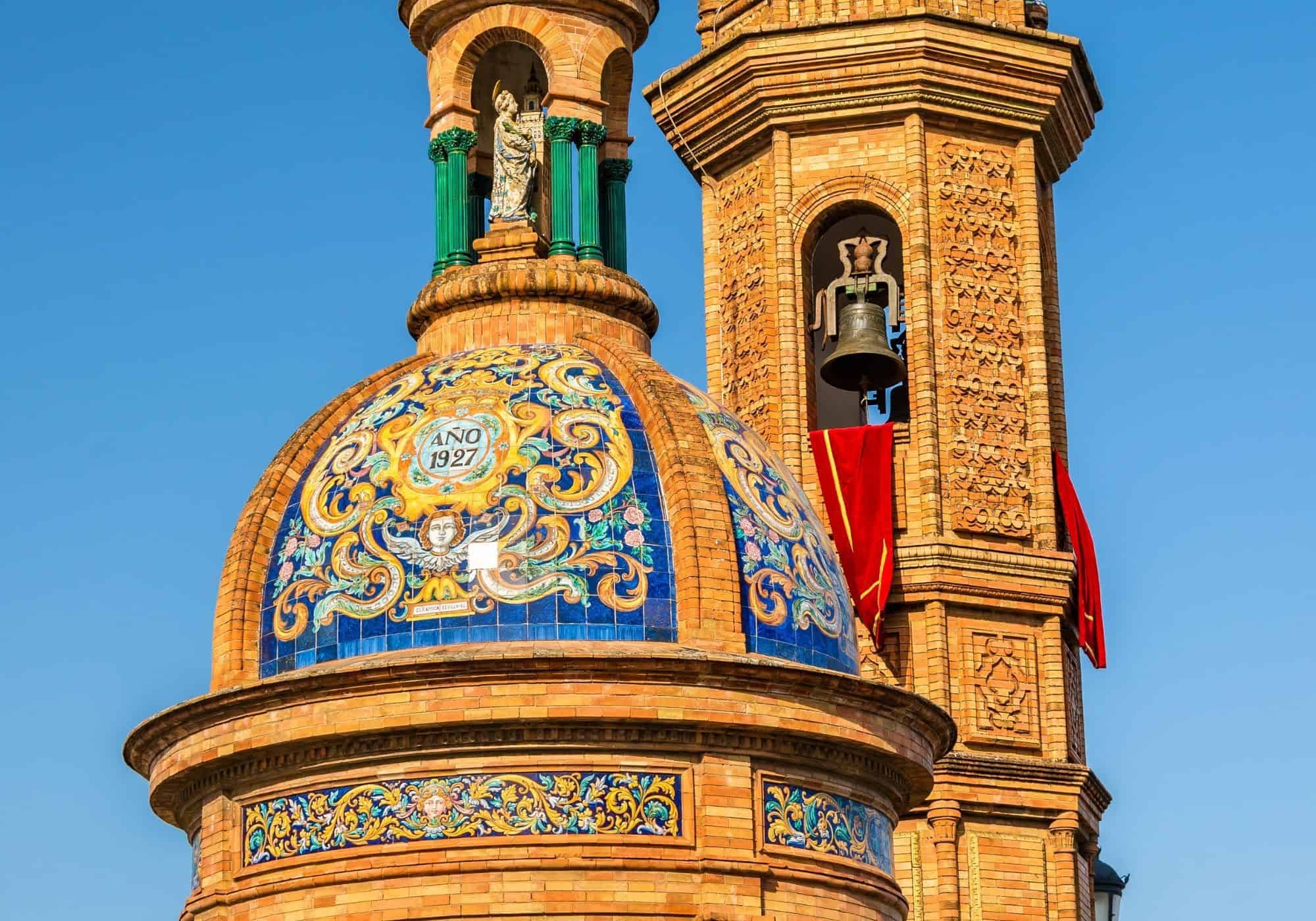 This tiny chapel lives just across the bridge that connects Triana to the rest of Seville, its blue and yellow ceramic dome shining like a landmark.

Although its vision of Spain seems centuries old, it was actually only completed in 1928, designed by the same architect who produced the resplendent Plaza de España. Officials destroyed the original chapel during a civil engineering project to widen the bridge. Locally known as the Mercado de Triana (Calle San Jorge, 6,) Triana market is where I met my friend with the knife and the bull’s head. This isn’t one of those gentrified markets selling only sweets and souvenirs. With real meat and real knives, this is the real deal.

The current market sits on the remains of the San Jorge Castle (Castillo San Jorge), home of the former Spanish Inquisition. It seems so strange to wander freely over land that tortured and captured before.

But this spot attracted traders long before that, with Moorish records reaching right the way back to the 12th century for this handy riverside spot.

And besides, in many parts of Europe, if not the world, almost every soil has a past.

When to visit Triana Market: like so much of the city, things start late here in Triana. The market is open from 9 until 3 Monday to Saturday and between 12 and 5 on Sunday. Check the up to date opening times here. Shop for Those Famous Ceramics

Once upon a time, nearly all the ceramics in the western world came from the tiny workshops of Triana. Ceramics mingled with ship building along these banks before Columbus headed out on the voyage that changed the world.

Even now, most street signs and house numbers across Spain copy the style of the Triana azulejos, even if they’re not all entirely authentic and original.

Look out for Cerámica Santa Ana (Calle San Jorge, 31) and Cerámica Triana (Calle Callao, 14) for souvenirs and signs of skill.

To delve deeper into the subject, visit the museum dedicated to the art, the Centro Cerámica, which gives guided tours in English and Spanish. The Other Side of the Columbus Voyage

The history books may focus on the Kings and Queens at the top, but Columbus needed a crew to man his fleet as he mistakenly searched for India.

The money came from the palace across the river; the workforce came from Triana.

For all the terrible things that came from this journey of “discovery,” it’s still humbling to imagine the impoverished sailors waving farewell to their families on this spot, unsure if they would ever return.

As a Catholic country, much of this history is preserved in religious ways. The Sailors’ Chapel (Calle Pureza, 51)  is one such example. Home to “the Brotherhood of Hope,” it houses one of the most important cofradias in Seville, known as the Esperanza de Triana. Each year, during Semana Santa or Holy Week, the brotherhood carries the cofradia through the streets in an elaborate procession.

The Church of Santa Ana

Triana, like the rest of Seville, overflows with churches. But if you only make time for one in Triana, make it the Gothic-Mudejar church of Santa Ana.

View of the Torre del Oro from Abades

Stroll Along Calle Betis for the View

If I had to choose a favourite spot within a favourite neighbourhood, it would be Calle Betis within Triana, Seville. This riverside street provides great views of the landmark Torre del Oro and the edge of the Santa Cruz Old Quarter. It also makes the perfect place to bar hop and call it a cultural experience.

Outdoor cafes line the street in Triana and locals start enjoying cerveza, in moderation, before lunch. It’s also a poignant place to pause and imagine the hopes, dreams, gold, exploits and misery that departed and arrived along here when Seville was one of the most important cities in the world.

Do you need to take a tour through Triana? Absolutely not. It’s small and compact and best explored by meandering around.

There are some things I’d always recommend you try, such as food tours and cooking lessons.

In Triana, you can take a cooking lesson within the market through Get Your Guide, which is easy to book on your phone and easy to cancel until 24 hours before hand. A Travel Story From Triana

“Take a photo of him,” she says, her eyes smoky with eyeliner.

I blink at the head on the wall.

“He’s the most photographed bull in Seville,” she explains, slashing flesh beneath her knife.

“He has no ear. You know what that means?”

She waves the blade. I take a gulp.

“It means it must have been a very good fight.” We’re talking about the local tradition. When a matador performs well, he slices off the bull’s ear as a trophy for the most beautiful woman in the crowd. But only after a “good” fight.

“Very good,” she drops the meat onto the scales. “A very good fight.”

This was the kind of thing I didn’t know before I lived in Seville. It’s Saturday morning and I’m wandering through the shadows of Triana’s covered market, close to the ruins of the Spanish Inquisition. Seville has a reputation for passion, for flamenco, and the blood and dust of the bullring. Triana, on the “wrong” side of the river, is its wild and wayward cousin.

Triana prides itself on partying the hardest – and in a city that starts dinner at ten and hits the streets at midnight, that’s saying something.

It prides itself on its ceramics and on its controversial place in history (the sailors alongside a certain Christopher Columbus  all came from this part of Spain. You’ll hear how the accent is similar to much of South America.) It even tries to claim both the music and dance of flamenco as its own.

Yet Triana doesn’t feel like a place that lives in the past. More that it’s so alive, it hoists its history along on its shoulders. On almost any given Sunday, to the scent of incense and the sound of a sorrowful band, floats wobble through the streets, bearing life-sized figures of Christ balanced on Triana’s strongest men. It’s a fascinating sight, with men, women and children decked in gold-trim costumes, cardigans and velvet breeches, while constantly chatting into mobile phones.

Despite the chaos, Triana still has a few streets that offer a moment of calm: Calle Pelay Correa, Calle Torrijos and Calle de la Pureza. Whitewashed, with a mustard-yellow trim and lines of soft-scented orange trees, they’re like the famed streets of the Santa Cruz Quarter – only without the tourists.

Even the underside of balconies are decorated with glazed azulejos tiles. Painted in canary yellow, olive green and a decadent blue,  these tiles from Triana’s workshops have spread across Seville, Spain, and the world.

No room for the Squeamish

Back in the market, there’s no room for the squeamish. Tongues sit stacked together and whole legs of cured jamon hang by their hoofs from the ceiling. Fish mouths gape open as a matriarch guts and fillets the rest with the slickness of a magician with a deck of cards.

I hurry past, to the frutas y verduras counter that brims with pomegranates, apples, pimientos and plenty of cartoon-shaped squashes. Wherever you are in Triana, you have to shout to be heard, be it in markets, bars, streets or religious processions. Nowhere is safe from the chopped and diced fragments of conversation.

By now, I’m at the edge of the Puente de Isabel II, opposite the entrance to Triana’s covered market and the curious Capillita del Carmen chapel. With my blonde hair and pale skin, I’ll never blend in here, but I can learn the language and ease into the culture.

I order a crisp, cool cerveza and gaze across the river, taking in the Torre del Oro and La Giralda, Seville’s most well-known landmark.

That’s another thing about Triana; it really does have the best view.

Travel tip number one: don’t underestimate the heat! When it comes to all the things to do in Seville, please pace yourself with a view on the temperature. This city is HOT from July to September and most visitors aren’t ready for it.

Triana is a nice place to stay with plenty of tapas bars and local character. However, it is ever so slightly further from the city centre and other attractions than districts like Santa Cruz. See here for a guide on where to stay in Seville.

What to eat in Seville

Tapas bars and restaurants crowd around Triana market and along the shores of the Guadaluquivir. They’re great for fresh food and people watching and, as in many places in Andalusia, you won’t be hurried along. See also my guide to the best tapas in Seville and where to eat.

What to buy in Seville

Triana Market makes a good spot to stock up on authentic Seville souvenirs,  such as ines rosales, mantecados, jamon, olive oil and, of course, fresh fruit and veg. 11 thoughts on “What To Do in Triana Seville: More Than Famous Ceramics”