So is Istanbul in Europe and Asia? The short answer is yes but there’s so much more to it than that. Here’s what you need to know… 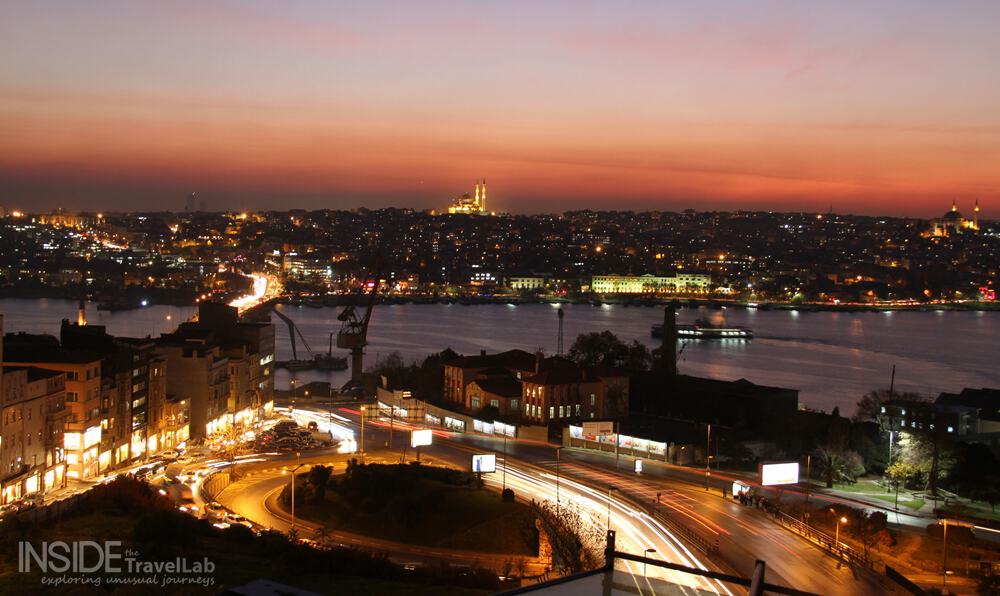 This article was originally published in 2011 and updated in 2021.

The European Side of Istanbul

He’s one of many who line the Galata Bridge in Istanbul, searching for sea life in the inlet of the mighty Bosphorus, the waterway known as the Golden Horn.

Despite the size of the city ( 13 million at least at the last count,) the air feels fresh and clean, with soft wisps of salt dancing through the breeze. It’s early morning and it’s also winter, meaning that the sun, like the rest of us, is still warming up to the idea of the day ahead.

I stride across the bridge, my hands curling inside my pockets to grasp any vestige of heat, while my breath joins the mist that veils the view ahead.

And what a view it is. About Istanbul: Both Europe and Asia

Minarets in lavender blue, matching domes in resting chrome. A foreground of scarlet wagons selling roast sweetcorn and pretzels and damp yet golden flagstones lit by the rising sun.

I love the city of Istanbul, perched as it is across the Bosphorus that divides Europe from Asia, with diplomatic parallels to match. When designing my #ironroute tour, a rail journey to look at the “east-west” divides in Europe and the former iron curtain, Istanbul seemed like a natural fit.

Its terminal used to mark the end of the Orient Express, a near-mythical journey that swept up Agatha Christie, Jackie Kennedy, Ernest Hemingway and more from the chic streets of Paris to the chandeliers of the Pera Palace Hotel. And while Turkey’s role in the Cold War was rather low key, Istanbul is certainly a city that knows a thing or two about divisions, from geography to ideology. About Istanbul: East and West

When the vast empire of Rome drew a curtain between its own territories, “western Rome” took Rome as its capital, while “eastern Rome” took Istanbul (or Constantinople as it became at the time.)

While the western Roman Empire crumbled in less than 100 years, the eastern one continued for more than a thousand. This Christian stronghold switched to Islam with the invasion of the Ottomans, who themselves established an empire that spanned more than seven centuries.

It’s hard to miss the greatest symbols of these two former empires as they face one another in the grassy area of Sultanahmet. The Hagia Sofia and the “Blue Mosque” remain two of the most awe-inspiring and magnificent buildings in the world – and at the very least they deserve is a blog post of their own (watch this space.)

Crossing to the Asian Side of Istanbul

This morning, though, while I admire Sultanahmet’s silhouettes on the horizon, that’s not where I’m headed. I’m filing along behind the commuters to reach the Spice Market – a collection of stained glass, leather, perfume, and yes, spice – and the designated meeting point for my guide from Context Travel.*

Context employs academics in love with their cities. I took my first tour with them last year in my own city, London, to find to my surprise Roman remains and Victorian markets beneath the glistening brittle glass of the City.

This time, I’m crossing the Bosphorus to reach Asia on a public ferry that costs about two lira (about one euro.) We’ve missed the rush hour and have both the seats and space to stretch out a little, while gulls loom ominously past the railings. The foam froths below and Sultanahmet slides away. I try to talk to my guide about the project I’m working on and she misunderstands me straight away.

“So you’re retracing the rail route from Istanbul to Berlin because of its 50th anniversary.”

Conversation becomes difficult. “The workers who went… In the 1960s… I thought that’s what…You know…”

More awkwardness – and I’m not quite sure whether the reticence comes from the misunderstood purpose of my visit or the event itself five decade ago.

I let a few more metres of Bosphorus glide past before trying again. Turkey, it seems, sided with Germany in World War One, the conflict that set the world stage for all the other global conflicts that followed that century.

“Turkey won all of its battles,” she says. “All of them. But it lost overall because it picked the wrong side. And that’s when the Bosphorus became international waters.” Crossing the Bosphorus by Ferry: Crossing from Europe to Asia

The gulls circle past, squawking and angry.

In less than twenty minutes, we will have passed from Europe to Asia. We will have reached the other side of Istanbul. But we will have travelled through international waters.

Never underestimate the complexity of politics when a valuable resource is at stake.

And the Bosphorus is valuable. Extremely valuable. This narrow channel connects the Black Sea in the north to the Sea of Marmara in the south and from there on towards the Aegean and then the Med. In shorter terms, it provides the only international shipping access for several watchful countries. No wonder both the Christian Romans and the Islamic Ottomans fought over its vital strategic position. And, perhaps no wonder that Turkey is now a secular state. “They are planning to build their own channel now, though,” my guide continues. “It will be bigger than the Panama Canal, bigger than the Suez. The plans are in the pipeline…It will…happen.”

My mind spins a little as I listen to the plans to carve a route through inland Turkey. It sounds like a plot from a James Bond thriller rather than 21st century politics.

I still haven’t uncovered the real story behind the Turkish workers who travelled to Berlin 50 years ago, other than to read between the lines of economic and educational exclusion and conflicts over repatriation. It’s something for me to investigate on perhaps another day.

For now, though, the foam turns the international water turquoise as we come in dock, translucent jellyfish suspended in fathomless blue.

Through our words, we’ve travelled through centuries. And yet in twenty minutes, we’ve only just reached Asia. #Ironroute is an independent journey with transport sponsored by Eurail. Disclosure: Context Travel provided complimentary Istanbul tours although, as always, editorial control remains mine. All mine. 18 thoughts on “Is Istanbul in Europe and Asia? What You Need to Know”