What does skydiving feel like? If you're feeling a little nervous before your first skydiving experience, that's normal. Pull up a chair and let's start at the beginning. I'll tell you what it's like - and then I'll share some first time skydiving tips.  Updated 2021.

Also, check out these fun questions about Spain and learn how to plan your perfect week in Spain.

“Bend your knees,” he says and I have to obey. From behind, he pulls the strap until the rubber scrapes my skull. I hug my arms against my chest and crank my head back, making the shackles around my thighs tighten further.

“Now,” he commands, as I try to ignore the gap where the side of the aeroplane should be, “don’t forget to smile for the camera.”

And with that, we’re gone. Of course, there’s been a build up to my first sky dive. Hundreds of thousands of other people have already done this, including, I’m hoping, my instructor. I use this thought to keep me steady on the morning of the big day. I’ve met people who’ve done parachute-loads of these things, including those for whom it’s simply a matter of getting from A to B: barracks to war zone. Their plight puts my pre-jump jitters into perspective.

Then again, there's no escaping the fact that it’s only string that’ll stop me from hurtling into the earth at 180 km per hour or, as it’s otherwise described, at terminal velocity.

As soon as I arrive at Empuriabrava in northeast Spain, it’s obvious I don’t belong. Sun-weathered faces cluster along the bar, while the loudspeaker announces the next “drop” with all the excitement of a station manager in Epping. The whoosh of all-black ninjas turning somersaults in the air before speeding in to land gets ignored by everyone apart from us.

We, the skydiving virgins, are shown a five stage cartoon: cross arms, head back, knees bent, jump. One tap on the shoulder to open your arms. Second to brings arms to chest as the parachute opens. Knees bent for landing. Questions?

Our training, admittedly advertised as brief, lasts for less than five minutes. Then the waiting begins.

There’s plenty of time to think about the important things in life: wills, outstanding emails, and every song with a potential link to skydiving. Having dismissed Jump by the House of Pain and something worse by Van Halen, I decide that if I have to have music in my mind as I plunge to my death, it might as well be Top Gun’s Danger Zone.

And so I swagger along the airstrip, my heroic stance only slightly undermined by the harness-induced waddle that makes me glad to be a girl.

I duck beneath the tail of the plane and catch a hint of burnt rubber. The Spanish sun greets me with ferocity as my hands grasp metal and my feet take me up the ladder, rung by rung. This, I already know, is the real point of no return. One step, the other step, keep walking, keep climbing. The humiliation of breaking an ankle before I’m even inside the plane would be simply too much to bear.

We’re in. The door closes. We’re off.  Squashed into two benches that face one another, I’m reminded, out of nowhere, of the ritual sacrifices in Aztec America. The skydiving instructors morph into faceless priests of the sky, camouflaged by helmets, sunglasses, balaclavas and cables. Only Ana and I look like flesh and blood humans, with our hair loose, faces exposed and summer clothes barely skimming our skin.

I smell petrol and heat and realise that it’s already started, that the first ones have gone.

“Sit on my lap,” says my instructor, whose name Santo translates, reassuringly, into saint.

"We must get ready," says Santo, to the backdrop of clinking metal.  The harness compresses my pelvis and ribcage and we stumble along the plane. It’s here, right now, that the absurdity of the situation takes hold. There’s a gaping hole where the side of the plane should be and not only do we not have our seatbelts on, but we’re walking right past it. Are they c-r-a-zy?! Don’t they know how dangerous this is? That we could fall out at any moment?

I’m not sure whether the roaring in my ears comes from the engine, the scalding air or the blood that’s blasting through my temples. Still, I’ve decided not to pay attention. All I have to remember to do is to bend my knees, cross my arms and, X&*^!, there was something else.

Just Before the Jump

The miniature fields of Costa Brava taunt me from far below, the speeding air steals the breath from my airways and within seconds I’m suspended in the air, clipped to Santo. The photographer hangs in the doorway like an animated Spider-Man and I know that this is the moment we’ve been waiting for: the 60 second freefall. 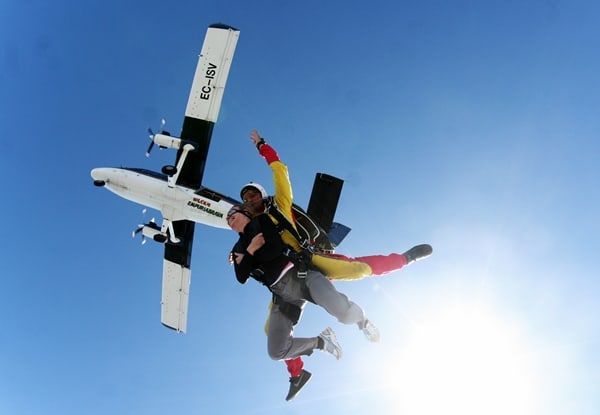 Nothing could have prepared me for this. Not snowboarding, not diving, nothing. I don’t feel as though I’m falling, I’m spinning upwards and backwards in a jet of burning air that whips away my voice, deafens my ears and spins my brain into overdrive. Those ochre fields twist around in hexagonal disarray. The earth and coast move way too fast and something slowly registers that I don’t seem to be breathing. Neutral survival kicks in: you need to try harder. Breathe through your nose, breathe harder, harder again, really use your lungs, you’re running out of time. I try it all, then swallow hard.

I’ve adjusted to this strange new reality and I stretch out my arms, feeling the sky run through my fingers like scorched cotton candy. I’m seeing the world in a whole new way when my throat chokes, my shoulders snap back and those thigh harnesses remind me that they’re there. The tumble dryer effect continues for another few seconds and then it stops. We’re still. Floating, dreamlike in the quiet, quiet air.

I hear Santo’s voice in my ear as he loosens my goggles, unfastens the harness and asks if I’m alright. 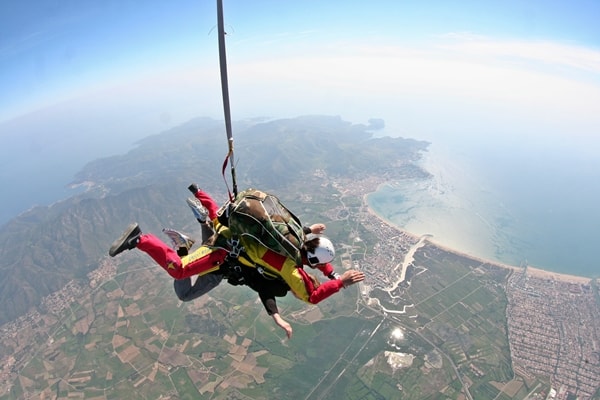 Through the haze, the Pyrenees rise up like purple shark fins. The Mediterranean Coast glitters appropriately. Santo points out the airport, the towns, and the border with France that hovers on the horizon.

He loops canvas over my fingers. Pull left to spin left, right to spin right, both down hard to stop. I’m flying, floating, soaring across the sky and it’s the most amazing, freeing feeling. I wave at the others on the ground and see them waving back.

We sweep in to land and my graceful out of body experience ends in a graceless heap on the floor. I’m not injured but it’s a shame the TV cameras were watching.

Still, it could have been worse. I could have died thinking of Van Halen.

So, what does skydiving feel like? If I still haven't convinced you, let me try another way.

What's the scariest part of skydiving?

For me, and for most, the scariest part is just before you jump. The gap at the side of the airplane is open and things seem very, very fast.

In general, yes, but accidents do happen. However, the same can be said of driving a car. As long as you book and jump with reputable companies, you've done all you can.

How fast do you fall when you skydive?

You fall at about 120 mph when skydiving - that's the freefall speed in mph. Once the parachute opens, you can glide around peacefully at a much slower pace.

How does skydiving work?

You put on a harness, strap yourself to an instructor, get into an airplane and then jump!

There is a little more to it (so please do attend the training session) but in short, you need to have your arms crossed and legs bent as you jump out of the plane. Then you can adopt that frog-like position with arms and legs outstretched to reduce spinning.

Experienced skydivers will also need to know how to check, fold and deploy the parachute.

When you come into land, you need to time it right and get running as the earth rises up.

Is there a sensation of falling?

Not for me, there wasn't. It felt as though I was being pushed up by a jet of hot air. It was only the view below that gave me any clue that I was falling.

And we're gone... Plummeting over the Mediterrannean Coast

My skydiving experience at Empuriabrava was sponsored by the Costa Brava Tourist Board. As you've probably gathered by now, all views are my own.

Shhh... Spain likes to keep some things to herself. For how else END_OF_DOCUMENT_TOKEN_TO_BE_REPLACED