Are you looking for some questions about Spain ready for a Spain quiz? Bienvenidos! You have come to the right place. We love travel in Spain and what better way to test your Spain trivia than with a fun quiz? Estas listo? Vamos!

101 Questions About Spain: Your Spain Quiz with Answers

Each section of this quiz about Spain is divided into rounds of ten questions with one bonus question at the end. You’ll find answers to each round right after each round, no need to scroll all the way to the bottom.

We have a range of questions about Spain, from the serious to the silly, and plenty of travel articles about Spain for further reading, so do delve in and enjoy.

Until then, enjoy these questions about Spain and have fun with the quiz! 1) What is Spain’s official name?

2) When did Spain last win the football World Cup?

3) What is Spain’s most popular newspaper?

4) Instead of the tooth fairy, who visits children who lose teeth?

5) What the world calls the Spanish language, Spaniards call…

6) Which side was Spain on during World War Two?

7) NASA Scientists study Huelva because of its similarity to which planet?

8) Which place in Spain is known as the City of Three Cultures?

9) Where can you find the only desert in Europe?

10) How many miles of coastline does Spain have?

Answers: 1) El Reino de España 2) 2010. 3) El País. 4) El Ratoncito Perez, a small mouse. 5) Castilian Spanish. There are many other languages spoken within the country. 6) Technically neither, although Hitler helped Franco to win the Spanish Civil War. 7) Mars 8) Toledo. For a golden period, Christians, Jews and Muslims lived happily side by side here. 9) In Almería, the Tabernas Desert. You can also visit old Wild West film backdrops there. 10) Around 4900 miles or 8000 kilometres. 1) What typically comes served with mojo in the Canary Islands?

2) How do you pronounce pintxos?

3) Which popular condiment was invented in Mahon, Menorca?

4) What specialist food or drink product is famous in Rioja?

5) In which part of Spain does salmorejo come from?

6) What is churros typically served with?

7) What is the secret to pouring cider in Asturias?

9) Which Spanish place does the word “sherry” come from?

10) What do Menorcan men typically drink in the morning?

Answers: 1) Papas arrugadas, salted potatoes 2) PINCH-oss 3) Mayonnaise 4) Wine! 5) Andalusia in the south, it’s a regional variation on gazpacho 6) Very thick hot chocolate 7) You must pour it standing up and drink it quickly before it goes flat. 8) A specific pintxos in San Sebastian, named after the Rita Hayworth character. 9) Jerez, a key producer of sherry. 10) A ginlet or small thimbleful of gin from the Xoriguer distillery. 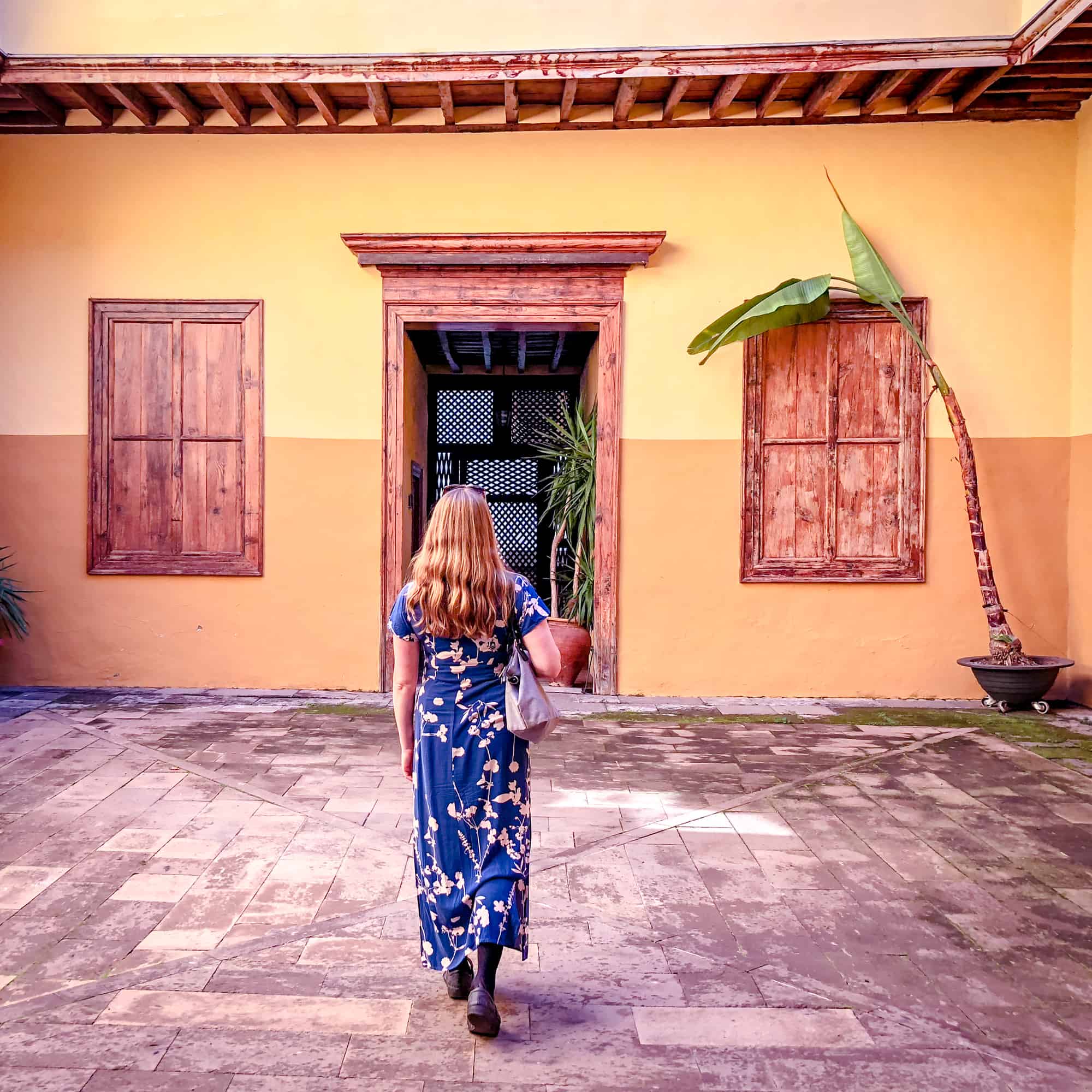 1) Where was the capital of Spain before Madrid?

2) Who spoke the famous words “Do not weep like a woman for what you could not defend as a man?”

3) Where is Christopher Columbus buried?

4) What was the Cordoba Mezquita before it became a cathedral?

5) What structure is a UNESCO World Heritage Site in La Coruña?

6) What year did the oldest chocolatería in Madrid open?

7) When did Spain become a democracy?

8) When was the Aqueduct of Segovia built?

9) In which year did Isabella and Ferdinand fund a voyage to find a new route to India?

10) Why is La Laguna in Tenerife a UNESCO World Heritage Site?

Answers: 1) The UNESCO World Heritage Site of Toledo 2) The mother of the last sultan of the Alhambra. 3) Seville 4) A mosque. 5) A lighthouse – the tower of Hercules and oldest functioning lighthouse in the world. 6) 1894. 7) 1977-1978. 8) It was built by the Romans in the 1st century AD. 9) 1492. This was the first Christopher Columbus voyage that “discovered” the Americas. 10) It’s the world’s first example of a city designed and built along a grid-like structure. 1) Who painted Guernica, the black and white tribute to the bombing of the village of the same name?

2) Which Spanish artist is best known for his melted clocks and moustache?

3) The artist El Greco came from where?

4) Which handicraft is Triana in Seville famous for?

5) What does the Golden Triangle in Madrid refer to?

6) Who designed the Sagrada Familia in Barcelona?

7) The world’s first novel was written and published in Spain. What was it and who wrote it?

8) Which famous museum dominates the skyline in Bilbao?

9) In which neighbourhood in Madrid can you visit the home of poet and playwright Lope de Vega?

10) Who was the first Spanish actor to win an Oscar?

Answers: 1) Pablo Picasso. Read more about the incredible story of Guernica in this piece on Madrid’s Golden Triangle. 2) Salvador Dalí. You can visit his home and flamboyant museum in Catalunya. 3) Greece. That’s what El Greco means in Spanish. 4) Ceramics. You’ll see the blue and white tiles as street names across the country. 5) Three world class art museums. Bonus points if you get each of the three names: The Reina Sofia, the Thyssen and El Prado. 7) It was Don Quixote by Cervantes. You can find out more about his life and see the famous windmills in Consuegra and Esquivas in Castilla La Mancha. 8) The Guggenheim in Bilbao. 9) In Madrid’s Literary Quarter. 10) Penelope Cruz for her role in Vicky Christina Barcelona. 1) What is La Giralda in Seville?

2) Where would you find the swirling chimneys of Casa Mila, otherwise known as La Pedrera?

3) The Alhambra near Granada is a magnificent UNESCO World Heritage Site. What does the name mean?

4) Where would you find the building that goes by the nickname “Las Setas?”

5) The gleaming white and glass Ciudad de Las Ciencas y Las Artes can be found in which Spanish city?

6) In which Spanish city will you find the largest Gothic cathedral in the world?

7) What is the term used for architecture that blends Christian and Moorish influences and is found across Andalusia?

8) Where would you find the swirling silver-coloured Guggenheim Museum in Spain?

9) Which park in Barcelona is filled with the work of Gaudí and also a UNESCO World Heritage Site?

10) In which building did Christopher Columbus receive his funding for his expedition which “discovered” the Americas? 1) What do Spanish people traditionally do at midnight on New Year’s Eve?

2) What gets thrown in the streets on the evening of the 5th of January?

3) In bullfighting, what do matadors do before entering the arena?

4) What do naughty people get on Christmas Day?

5) What do women traditionally wear during Holy Week?

6) If you see the word caballeros on a door, what does it mean?

7) What do people typically say when they pick up the phone?

8) What is the main religion in Spain?

9) Does anyone still have a siesta?

10) Which region of Spain does paella come from?

Answers: 1) Try to eat 12 grapes before the chiming of midnight ends. 2) Sweets or caramelos for children from the Three Kings for Reyes Magos. 3) They pray. Bullrings have private chapels for this purpose. 4) Carbon dulcé – a black sweet made to look like coal. 5) A mantilla, a lace veil over their faces or attached to their hair. This is typically black but can occasionally be white. 6) You are about to enter the men’s toilets. 7) Diga or digame. It literally means “speak.” 8) Catholicism 9) Yes! While not widespread across the country, the siesta is still fundamental in many parts of southern Spain. 10) Valencia 1) What gets pelted at participants at the Tomatina?

2) What must people climb a greasy pole to get before the Tomatina starts?

3) When do most Spanish children get their Christmas presents?

4) What should a groom do the night before his wedding?

5) What do women wear to the Feria de Abril, the biggest fiesta in Andalucia?

7) Which big festival takes place in Tenerife every spring?

8) Which festival is celebrated by firecrackers in Valencia every spring?

9) In the Festival de Gracia, what will you find hanging from balconies and street lights?

10) What do brotherhoods wear during Semana Santa processions in Seville each Holy Week?

Answers 1) Rancid, rotten tomatoes. 2) A jamon or leg of ham. 3) On 6th January for Reyes Magos.  4) Serenade his bride at her window and try to climb up to her. 5) Polka dot dresses and shoes. 6) Flamenco. Sevillana is also very popular but is less well known around the world. 7) Mardi Gras. It’s huge on the island and a museum showcases the incredibly elaborate costumes.  8) Las Fallas 9) Paper maché sculptures. 10) Pointed hats that look uncomfortably like the Ku Klux Klan. They are unrelated – and the Spanish wore them first. Read more about that here. 1) Where is the centre of the country?

2) Roughly how many people in the world speak Spanish?

3) The highest mountain in Spain is not in the Iberian peninsula. Where is it?

4) What colours of sand will you find in Tenerife?

5) How many UNESCO World Heritage Sites does Spain have?

6) How many countries have more UNESCO World Heritage Sites than Spain?

7) Which fruit grows on the streets of Seville?

8) Where does Spain rank in terms of EU countries by size?

9) Which liquid does Spain produce the most in the world of?

10) Where in Spain can you find the oldest restaurant in the world?

Answers: 1) The Puerta del Sol in Madrid lies at the centre of the country. 2) Around 406 million. It is a useful language to learn! 3) It is Mount Teide in Tenerife. It is a volcano and is 3718 metres high. 4) Golden yellow- and black. The yellow sand has been brought in from the Middle East. The more natural colour is black from the El Teide volcano. 5) At the time of writing: 44. 6) At the time of writing: two. Only Italy and China have more. 7) Oranges! 8) Second, after France. 9) Olive oil. 10) Madrid. El Restaurante Botín opened in 1725 and has been entered into the Guinness World Book of Records. 2) Which seas and oceans border the coast of Spain?

3) What do the Iberian lynx, Iberian wolf, Cantabrian brown bear, Spanish Imperial Eagle and Spanish Ibex have in common?

4) Which is the largest balearic island?

5) What is the international code for Spain?

6) Where does the “running of the bulls” festival take place each year?

7) Which mountains form the border between France and Spain?

8) Which flower is on the national flag?

9) What is the national bird of Spain?

10) What is the national animal of Spain and also found on the flag?

Answers: 1) France, Andorra, Portugal, Gibraltar & Morocco. 2) The Atlantic Ocean and Mediterranean Sea. Also, the Bay of Biscay. 3) They are all protected endangered animals endemic to Spain. 4) Mallorca. 5) +34 6) Pamplona. 7) The Pyrenees. 8) A red carnation 9) The short-toed eagle 10) A bull 1) Which parts of Spain are within Morocco?

2) Which island at the southern tip of Spain does the Spanish government wish to govern?

3) Which are the three largest cities in Spain?

4) When do bullfights typically occur?

5) What is the Spanish version of Hello magazine called?

6) In which year did Barcelona hold the Olympic Games?

7) How many islands make up the Canary Islands? For a bonus point, can you name them all?

8) Where is the southernmost point of Spain and mainland Europe?

9) What is the name of the most famous fountain in Madrid?

10)  Where does the Camino de Santiago pilgrimage trail end? Surprising and Unusual Things to do in Tenerife How to Spend a Perfect Week in Spain