Madaba: famous for mosaics but there’s more to the story than that

The Madaba mosaics take visitors on a journey through shadows and candlelight to the Holy Land of 1500 years ago. They also have a new surprise. Here’s how to visit the mosaics of Madaba, Jordan. They form part of an ultimate Jordan itinerary. Madaba is famous for its mosaics. Or, rather, the Madaba mosaics are famous.

This small town in Jordan, nineteen miles southwest of Amman and on the Kings Highway, smells of cardamom, rosewater and ancient sighs. It earns its place on the map of the world today with a map of the world from yesterday: one of the oldest maps of the Holy Land, built out of two million pieces and embedded in the floor of the Saint George Greek Orthodox Church.

But, of course, that’s not the only mosaic in Madaba. And it’s not only about the olden times. 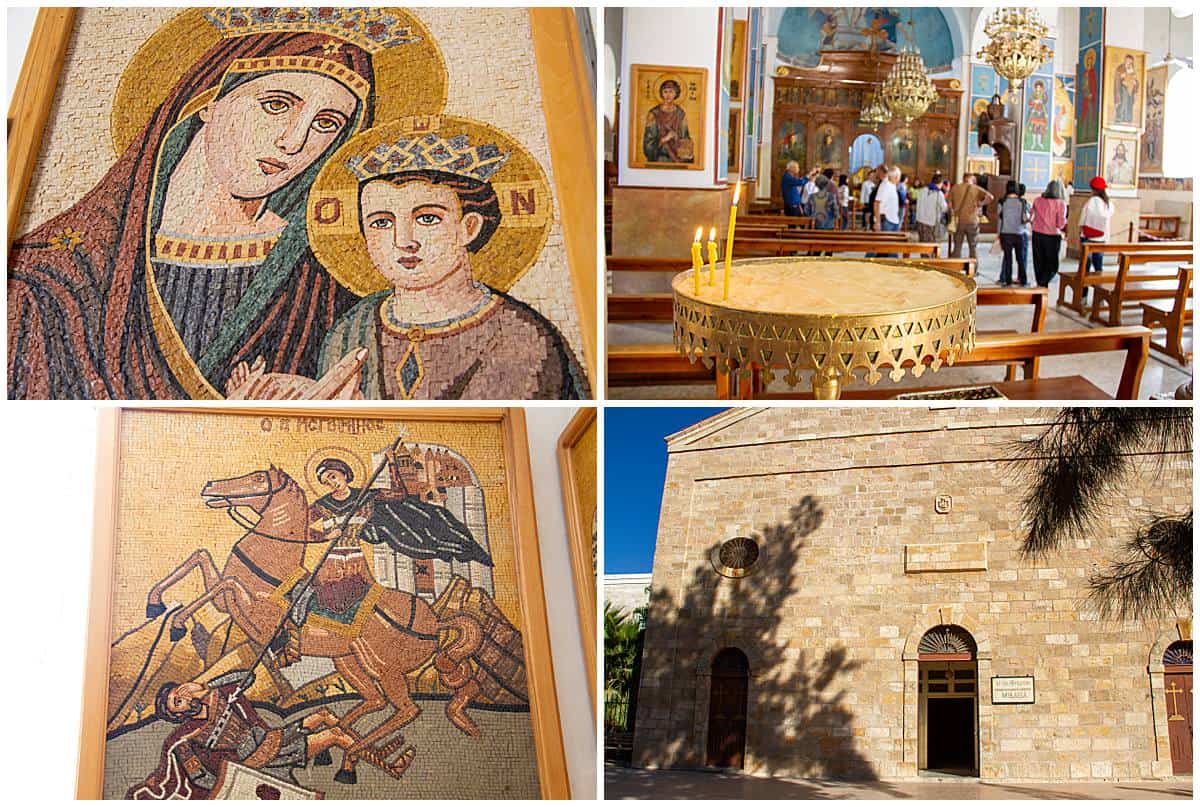 Looking around the church with the famous Madaba map

Like every self-respecting place in this part of the world, Madaba first appears in the Bible, more specifically in Numbers 21:30 and Joshua 13:9 of the Old Testament.

Its residents shared hummus together through the Roman and Byzantine empires, the arrival of Christianity, the Islamic Umayyad Caliphate and on to the 21st Century.

Times are tense in the Middle East now, and sometimes it feels as though they have always been. Perhaps the same could be said for Europe.

But Jordan itself, and especially Madaba, like most of Europe, is celebrating decades of safety and peace.

And in Madaba, the way to do that is with another mosaic.

Recommended reading: The Best Things To Do in Jordan: A Guide to Help You Plan Your Trip Aiming for a world record – creating beauty from broken pieces

The Madaba Mosaic that’s aiming for the World Record

At nearby Mount Nebo, there’s a different mosaic in production. It depicts The King’s Highway, a route that runs from Aqaba and the Red Sea north to Bosra Sham. When complete, it will run for more than 30 metres involving more than 3.5 million pieces and expects to earn the record of being the largest mosaic in the world.

And if you look closely, you’ll find a piece with my name.

The city of Madaba, you see, invites visitors to contribute a signed piece each. Young and old, men and women, creative and inept. There’s no barrier to race or religion here. It’s both a brilliant marketing strategy and a heartwarming gesture.

And what will this new mosaic of Madaba show? The Dead Sea, the Baptism Site of Jesus, and, of course, Madaba itself. All real installations along the King’s Highway, not to mention some of the best things to do in Jordan. The Mababa Map: the fertile valleys around Jerusalem, 1500 years ago

Back in Madaba itself, what is it like to visit the Madaba Map?

The Byzantine church of St George is a church like no other I’ve seen. There’s light, where others live in shadows, there’s paint in cerulean blue instead of raw, roughened stone. And, of course, that mosaic. The 6th or 7th century version of the Holy Land, the most disputed piece of earth on earth.

But this picture from the past is at once broken and whole. Segments are missing yet the fundamentals remain: artists depicted the way they saw the world in a way that speaks to us 1500 years later.

It’s astonishing to remember that the Madaba Map was lost, only rediscovered in 1896. It contains over 2 million pieces of coloured stone, together depicting the hills and valleys of the Nile Delta and Jerusalem. It wears muted, calming tones, with uneven gaps and a sense of peace that seems at odds with the reality of the land and the history in question.

For such a famous place, the crowds are restrained, small and respectful. Or at least they were when I paid a visit. Amid gilded crosses and flickering candles, this is a quiet place. And small. No Westminster Abbey. No vast Notre Dame. Rather mosaic after mosaic after mosaic. Golden haloes. Mother and child. Whispers. Stories. History.

And outside, waits more cardamom coffee, honeyed stone and the silver rustle of the olive trees. Hundreds of other mosaics exist in Madaba. Some form part of ancient history. Others are more of the Beavis and Butthead in Notting Hill kind of genuine mosaic memorabilia.

For a more easily navigated collection of Madaba mosaics, with a primer on how to make them, head to the nearby museums.

It includes the earliest known mosaic of Madaba, the Mosaic of the Lower Baptistry Chapel, with rams, a bull, a lion and gazelle. Another highlight includes the Eden-like Mosaic of Paradise, where trees burst with fruit and hares leap amid lions. Home to the Madaba Institute for Mosaic Art and Restoration (MIMAR,) the Madaba Archaelogical Park offers a taste of those Roman roads as they were thousands of years ago.

The exhibition also contains the oldest mosaic fragment found in Jordan and the stunning floor of the Hippolytus Hall.

Recommended reading: Is Petra By Night in Jordan Worth It? 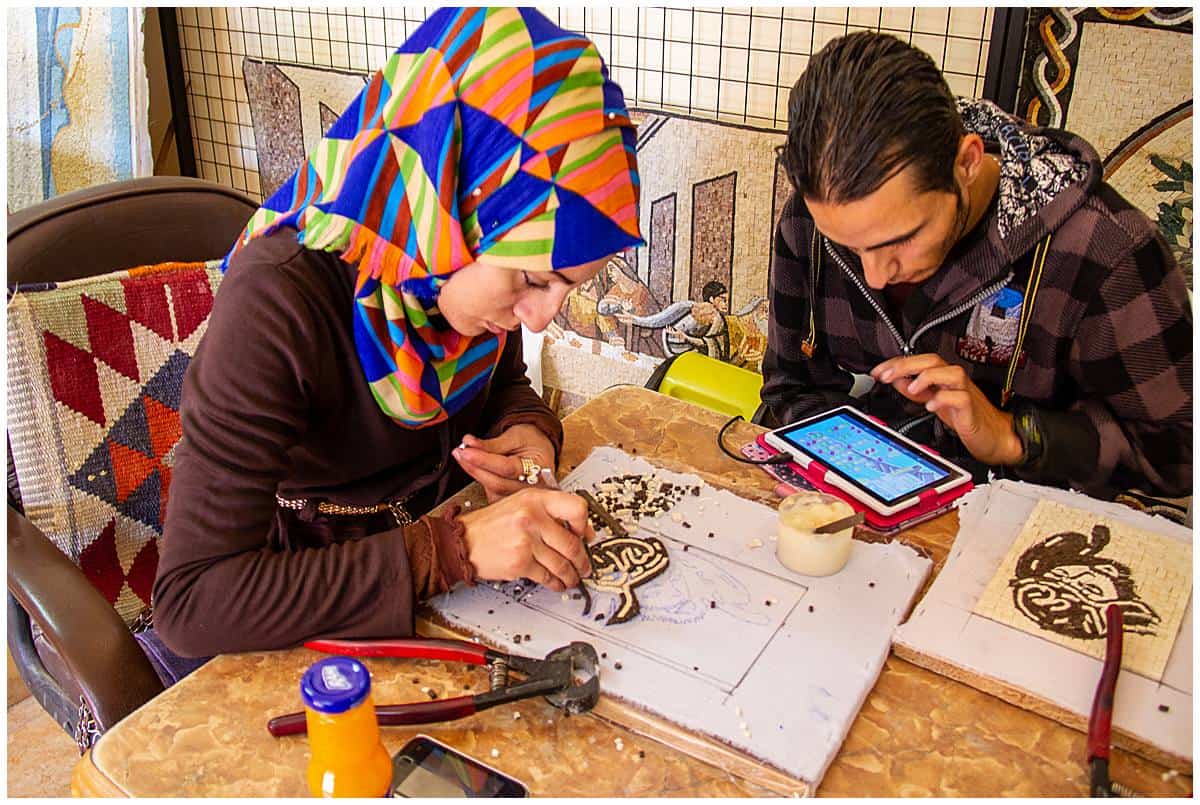 Madaba is only 19 miles from the capital Amman, so it’s easy enough to do as a day trip. Another alternative is to travel to Madaba for half a day before heading further along the Kings Highway to the classic sights of Petra, the Dead Sea and Wadi Rum.

You can travel to Madaba and visit these sites independently or arrange a driver and guide for a week or ten days in Jordan. Yet another option is to join a group tour, like this recommended Jordan Escape tour from Globus. I’ve written about the pros and cons of each option on this article over here on how to plan your Jordan itinerary. Happy travels!

Disclosure: My trip to Jordan formed part of a paid collaboration with either Visit Jordan, iAmbassador or Globus Travels. Everything in this post is still wholeheartedly recommended by me, because let’s face it, otherwise what’s the point?!