Things to do in Pembrokeshire, Wales: Amazing Puffins and the Smallest Cathedral in the Land Things to do in Pembrokeshire

Twinkling on the west of Wales, Pembrokeshire combines wild rugged nature, lurching puffins and druid-y outposts with gourmet food and some luxe accommodation. Perhaps the best known part of Wales, here is our inside guide to things to do in Pembrokeshire.

As national parks go, the Pembrokeshire Coast National Park is pretty special. It's the only one in the United Kingdom that earned its position through coastal rather than inland beauty and it's one of only three in Wales (the other two are the Brecon Beacons National Park and Snowdonia.)

Scooping up over 243 square miles, four main landscapes make up the park: the south Pembrokeshire coast including Caldey Island, the Preseli Hills, the Daugleddau Estuary and the St Bride's Bay coast and coastal islands. It's a bright spot of beauty in the already beautiful area of west Wales.

Recommended reading: The Hiking Gear List: What to Pack for A Walking Holiday Puffins on Skomer Island in Pembrokeshire

Walk with Puffins on Skomer Island

Skomer Island isn’t just home to 2000 or more pairs of breeding Puffins; it’s a place that makes you feel at home with them as well. Hike around the island as they swoop past or crouch down for a close up snap at eye level. If you’re lucky, you’ll also glimpse a manx shearwater or a school of dolphins off the coast.

Less than a mile from the Pembrokeshire Coast, the exceptional wildlife here ranks as one of the best things to do in Pembrokeshire, if not Wales, or, let's go all out, the whole of the UK.

Boat trips depart at different times depending on the weather but you can find up to date information on visiting Skomer and Skokholm Island here.

Recommended reading: Felin Geri Luxury Glamping in Wales – What to See, Do and Pack

St Bride's Bay, part of the Pembrokeshire park, shows off with spectacular sunsets over a sandy bay.

And with a sensational viewpoint, it almost wouldn’t matter what staff at the Druidstone served as their guests could simply stare out over the horizon into that expanse of glittering blue.

Fortunately, however, they do care, rustling up everything from a curious seafood and laverbread risotto to afternoon favourites of fresh scones with jam and cream tea. Take your time here, as both the service and the décor are on the quirky side. But it's that sense of character that makes it one of the best things to do in Pembrokeshire.

The name blue lagoon conjures up sparkling wate and crystal sea. And that's kind of right. The place is beautiful. What's unusual is that it's past. No, not castles and battling the English but the other great Welsh historic pastime: the smoky industrial revolution.

The Blue Lagoon was a slate quarry right up until 1910 when it was abandoned. Now it's a stunning spot, run by the National Trust, and great for bathing, coasteering and, of course, walking and hiking.

Sleep in a Nunnery

Though the inside now wears crushed velvet, silver and chocolate brown covers, the shape of the outside gives a clue as to its past. The Penrhiw Hotel lives at the top of a steep climb from the St David’s monastery, behind a gated driveway and within heavy, stone-clad walls. As the former nunnery, a sense of history lingers on amidst the wide wooden stairs and the solemn, watchful doorways that lead to each room. Walk Around a Country

Hiking has long been a key activity among the sweeping cliffs, rocky bays and smooth sandy beaches of Pembrokeshire. But not until 2012 were you able to walk the whole way around the country. The Welsh Coastal Path (or Wales Coast Path, all 870 miles of it) is the only one in the world that allows hikers to walk, uninterrupted, around the sea walls of a nation. Drink a stiff cup of tea, lace up those boots and get going!

The Pembrokeshire Coast Path runs from Amroth in the south to St Dogmaels, where it links up with the Ceredigion Coastal Path to continue around the country.

Cwtch is a Welsh term for a hug, a cuddle or a snuggle of some kind. It’s a homely, friendly, easygoing expression. It’s also one of the best restaurants around, tucked into a quiet street in St David’s City. Indulge in potted Solva crab or ham hock with an apricot and pistachio terrine. Make sure you leave time for a Cwtch Sparkle: lunetta prosecco with cassis. Found across Wales, this controversial form of seaweed crops up time and again around the coast of Pembrokeshire. Dark and slightly tangy, the seaweed behind the delicacy is called purple laver and once it’s been boiled (and then usually fried with crispy oats) it becomes the dish laverbread. Tuck in to this seaweed oat-cake at breakfast, where it fits in perfectly with bacon and eggs. And, if you want it the Swansea way, with cockles. Find out more about traditional Welsh food here.

Recommended reading: 9 Unusual Things to do in North Wales The hallowed stone edifice of St Davids cathedral defines the skyline of Britain’s smallest city, so it can hardly be described as unusual. What is more unexpected, perhaps, is the line-up of orchestras, choirs and organ recitals that fill both the calendar and the rows of pews inside. Soak up 1500 years of history beneath the glow of stained glass and listen to fantastic global music roam around your ears. Outside, breathe deep into the landscape of rolling hills and nature and ponder the strange significance of it all: it is because of this medieval masterpiece that Pembrokeshire is home to Britain's smallest city.

The stained glass windows of St David's Cathedral swell with music and summer crowds each year as part of a 10 day music festival. Find out more about the International Fishguard Music Festival here. 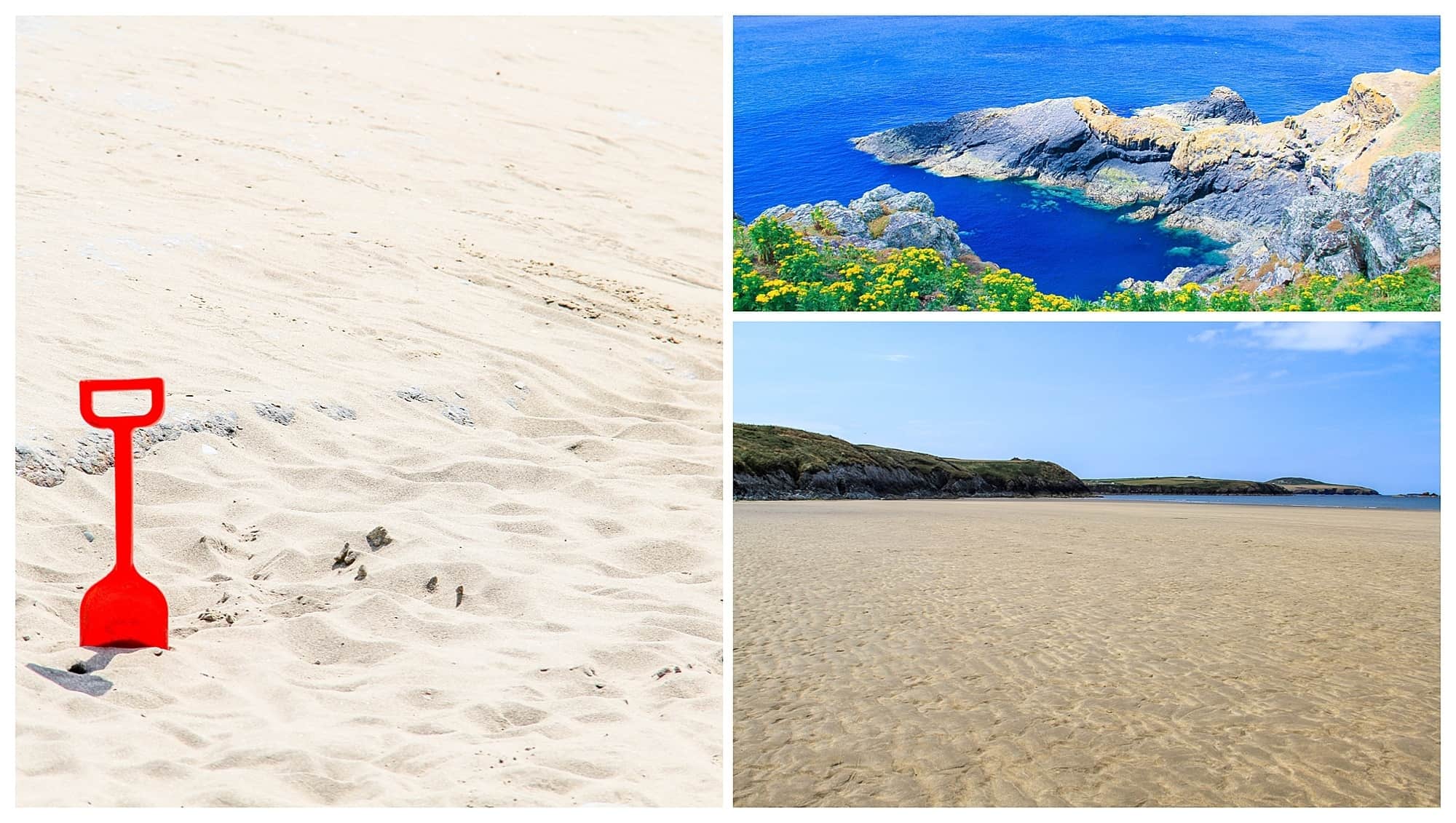 Walk or drive to Whitesands beach to splash around in rockpools if you have children or laze on the sand if you do not.

It's a popular surf spot with a great curve of powdery white sand, which, ahem, given the name, shouldn't come as a surprise.

Well, it wouldn't be Wales without a castle or two. Described as the "castliest of castles," Pembroke Castle rounds up over 1000 years of history in its charmingly rugged stone. Falconry draws on traditional practices while sunset cinema showings stride into the present. Inside The Shed in Porthgain: Gourmet Fish and Chips

Check out the best fish and chips in Wales at The Shed in the curious small town of Porthgain. Formerly a hefty industrial port, it somehow pulls off the magic trick of greeting you with charm while keeping  the key elements of its history alive.

If you still think that fish ‘n’ chips is just some warm, filling tat that comes wrapped in yesterday’s paper it’s time to think again. The Shed in Pembrokeshire’s Porthgain prides itself on its gourmet offerings, with produce locally caught and served within the hour.

Sit outside when the sun shines or inside, amid bright blue bottles and red checked cloths, should the Welsh wind and water stroll into town.

You can take a short, historic walk around the former lime kiln, pilot’s cottage and vast hoppers before relaxing and taking in the view of the (now picturesque) harbour.

Next up in the castle department, is Carew Castle, a Norman stronghold with strong Tudor influences. Not to be outdone, Carew notches up over 2000 years of military history here at the limestone bluff that overlooks the Milford Haven Waterway.

Today, ghost tours and knight school keep the blood pumping through the stone. But in a far kinder way than in the bad old days... Walk along the heathland atop cliffs that rise to 120 metres above the sea on Ramsey Island. Home to peregrine falcons and seal pups, find out the timings of boat trips to the island here.

Visit pastel pretty town of Solva and head to the hills on the Welsh Coastal Path.

This small harbour makes a good spot for young children to swim, with a stretch of sand, rockpools and caves.

Learn to Surf, Kayak and Coasteer

Wales has built up quite a reputation for adventure sports over the last few decades. And what's great about it is that you'll find opportunities for everyone, from beginners to advanced.

A dog scampers along the sand and the waves wash against the shore. Insistent but unhurried, casting off behind them a salty spray that lingers in the air. The wind seems half-hearted too, whisking the chatter away from the ice cream stall, along the grassy banks and off over the edge of the Pembrokeshire coast, losing heart as it hits the Irish sea.

Men form a semi-circle on the sand, arching their backs and turning their faces towards the sun. But this isn’t a wellness retreat or a yoga lesson.

It’s surfing. And this is a surf lesson.

It came as part of an adrenaline cocktail adventure with local company Preseli Venture, along with an intriguing taste of coasteering and a dependable sea kayak along the more rugged parts of the coast.

Bookmark these things to do in Pembrokeshire on Pinterest and read later... What to see in Pembrokeshire - Things to do in West Wales Things to do in West Wales

Where to Stay in St Davids Pembrokeshire

This place goes straight into my special secret file of wonderful places to stay.​

The Penrhiw wears crushed silver and chocolate within the grounds a former nunnery. From a design point of view, it's beautiful. Comfort and service? Personal, professional and very, very friendly. Parking? Free and easy (this may not sound much of a plus point but St David's is both tiny and popular and Pembrokeshire is best explored by car so it becomes a real gift.)

You can walk into St David's along a leafy (if steep) road and on your return relax in the lounge or library reading one of several sumptuous books about Wales. There's free wifi throughout, with no code to mess around with. And with only seven rooms in total, the Penrhiw never gets crowded.

Tuck into laverbread for breakfast or else stick with the traditional Full Welsh instead. The best part about the Penrhiw? You have free access to the kitchen, fridges and freezers thus combining the best of the hotel world with the best of the (very well stocked) self-catering world.

Perfect for late arrivals - and for preparing picnics for Skomer Island. Disclosure: I arranged this short break in Pembrokeshire in association with Tourism Wales. I had complete freedom to arrange the itinerary and, of course, to write about whatever I liked. As usual, as always.

Traditional Welsh Food: The Five Dishes You Need to Know

Traditional Welsh Food: The Five Dishes You Need to Know
Cheers in French! The Three Things You Need to Know About French Drinking Toasts
Lisbon Restaurants Where Locals Eat
How to Easily Arrange a Beautiful Weekend in Paris