The Best Islands in the Caribbean for Authentic Travel Experiences

(And Gorgeous Places to Stay)

Finding the Best Islands in the Caribbean For You

Which is the best Caribbean Island for you to visit? It's not as simple as pick the easiest flight connection and go (although it can be if you want!) But with more than 7000 islands and 28 island nations, each with a rum-punch-packed character and local culture overload, it's worth looking closer, especially if you're looking for an authentic travel experience.

Tourism is big business in this sun and sea part of the world. And that means that big corporations can gobble up the local flavour of the place, if you're not careful. So this is a different list to most. It's going to focus on authentic, beautiful travel experiences - as well as the palm trees.

Here's our inside guide to the best Caribbean Islands to visit if you love nature, food and culture and aren't too keen on crowds. I've been to all the ones I've listed. And will be back with more.

Quick Notes About Travel to the Caribbean Islands

When is hurricane season in the Caribbean? June to November, although the highest risk takes place between August and September.

Erm. Can you avoid the hurricanes? Kind of. Aruba, Barbados, St Vincent and the Grenadines, Grenada, Trinidad and Tobago, Bonaire, Curaçao, Providencia Island and San Andrés officially lie outside the hurricane belt. Taking in the sunset on Pelican Beach, Aruba

With dry, sunny weather and beautiful beaches with soft surf, Aruba's landscape can be strikingly rusty and burnt orange in comparison to the lush greenness of other islands in the Caribbean.

Aruba has both a Caribbean and Latin American feel to it, floating as it does just 18 miles north of Venezuela, with a Dutch and North American influence too. Somewhat surprisingly, it's part of the Kingdom of the Netherlands.

Aruba hold a Carnival once a year, with weeks of celebrations, colourful floats, music and costumed dancers.

The beaches are the biggest attraction on the island, with plenty to do in and around the water. There are rock paintings in the dry central park and a famous spot for scuba diving around the Antilles shipwreck.

Onshore,  there is plenty of shopping, including both international brands and local art.

Aruba does not have a direct flight to or from London, but connects well via Amsterdam, which works well for regional airports like Cardiff.

The California Lighthouse, which was built between 1914 and 1916. It's location is perfect for views of the north coast, and sand dunes. After dark, casinos, clubs and bars provide plenty of themed entertainment to enjoy.

The official languages on Aruba are Dutch and Papiamento, but most locals here are multi-lingual and can communicate in English and Spanish. 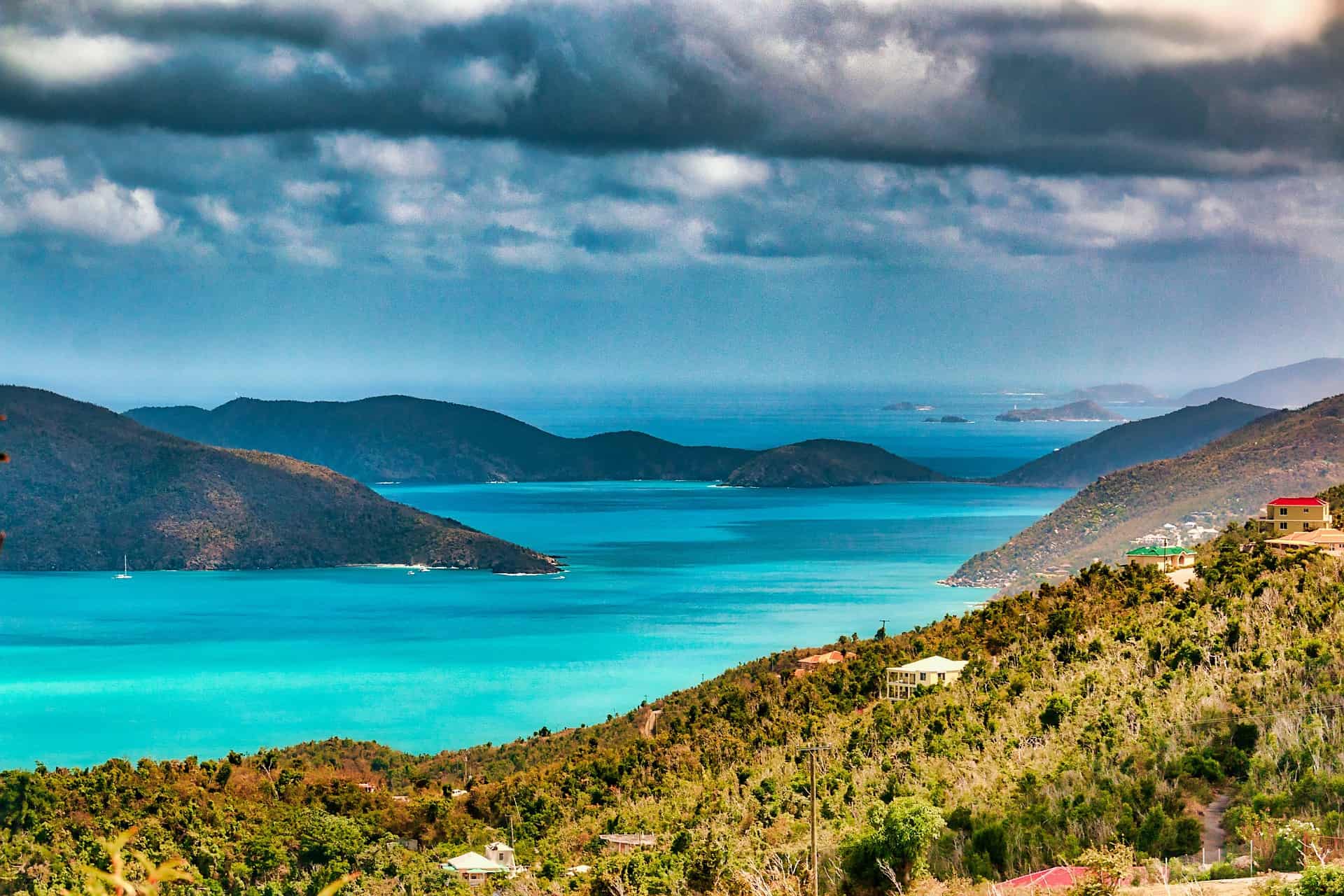 The British Virgin Islands are a collection of 50 small islands, many of which remain uninhabited, allowing lots of chances to island hop.

On Tortola, the largest of the islands, you can enjoy shopping, fine dining, and there are ferries shuttling passengers to several other islands. This is the perfect starting point to begin exploring.

The culture on this island is a mix of European, African and Caribbean elements. Sailing is still the favourite sport on the islands, which has been called the "sailing capital of the Caribbean". There are other sports enjoyed on the island as well including football (soccer) and cricket.

Getting around the British Virgin Islands

Tortola has two main highways and some side roads along with a bridge connecting nearby Beef Island. Virgin Gorda, Anegada and Jost Van Dyke also have small road systems in place. But in most cases, you'll be hopping around by boat.

Language
The official language in The British Virgin Islands is English, though an English with a creole accent. The main currency is the US dollar.  Despite the name of the place, it's no longer British, though it does maintain its place in the Commonwealth.

There are no direct flights to The British Virgin Islands from the US, Canada, Europe or South America. All flights must connect through another Caribbean airport. But that's what leads to the authenticity! St Vincent and the Grenadines

St Vincent is the main island and the Grenadines, in case you were wondering are the 32 other islands that float into emerald hills and cosy harbours amid crystalline, turquoise shores.

SVG, as its known for short, combines uber-luxe areas like the island of Mustique, and quiet, small fishing communities and barefoot low-key hotels.

This chain of islands offers rainforest eco-adventures, scuba diving, yachting and sailing , as well as authentic cultural experiences like the Sand Dollar Orchestra.

Saltwhistle Bay Beach is one of the most relaxing spots on the island. Mayreau is a compact mile and a half long cay located in the west of the Tobago Cays. It's isolated with small boutiques and a small hillside village. It's a must see if you're island hopping and in search of solitude.

On the main island, La Soufriere Volcano attracts active types and foolish beginner hikers like myself. The tropical heat makes it seem harder than it should but the top does reward with panoramic views of the Leeward coast. The volcano also explains some of the SVG black sand beaches.

Getting Around St Vincent and the Grenadines

The main language in Saint Vincent and the Grenadines is English, with a gorgeous Creole accent. Barbados is a fascinating place.

It is an island rich in culture from West Africa but with traditions and customs from the British Isles, after 300 years of Empire. The Empire is long gone but traditions such as afternoon tea, cricket and horse racing remain.

This island is filled with shopping, calypso music and plenty of sports to keep you entertained while not at the white sand beaches.

There are chances to swim with turtles and even find secret secluded beaches.

Every beach on the island is publicly accessible.

Near the northern tip of the island, Animal Flower Cave provides dramatic views of the Atlantic Ocean.

As with most Caribbean islands, sailing is very common. Get yourself a catamaran and explore the island coast yourself or hire a guided tour.On land, several trails explore the local rain forests and wildlife.

The main language on Barbados is English. There is also a local dialect spoken, called Bajan. It's a combination of British English and various West African languages.

Jamaica is the birthplace of reggae adn it lives life with a whole lot of laid back sass in a magnificent tropical setting.

Beyond the resorts, you'll find natural waterfalls and beautiful national parks. Dunn's Rover Falls and Park is one of the most widely recognisable places on the island. It's a large cascading waterfall, and during certain times of year, it's possible to climb the falls. Or scramble and slip about on them anyway.

Historic Falmouth is said to be one of the last remaining examples of a Georgian town outside of England. Here you can find river rafting and a lagoon that naturally glows at night.

The best time to visit Jamaica is between November and mid-December. You'll find that January to March is peak season and prices tend to be higher.

The official language on Jamaica is English, though you'll hear a wide variety of idioms, that you'll have to concentrate to decipher

Keep in mind the high-crime areas and exercise caution. While the island is beautiful, pay particular attention to Kingston, Montego Bay and Spanish Town. Antigua is known for its lively cultural scene, pineapples aplenty and its claim to have enough beaches to be able to visit a different one for every day of the year.

As the largest of the British Leeward Islands, Antigua has some of the most beautiful white and pink sand beaches with pristine coral reefs and a laid back island style. This is a great place if you enjoy partying in the sand. But it also has quiet natural escapes and historic landmarks.

Several markets offer handmade goods, fresh pineapple juice and rum. And you'll find plenty of all three across the island.

However, there's no escaping the island's bleak history (and quite right too.)

There are several plantations to visit throughout the island. There are plenty of places to sail or charter a deep sea boats.

In Redcliffe Quay, found in the capital of St. John's, there is a compact shopping district and plenty of bars, boutiques and cafes to enjoy.

If you only visit one place beyond the beach, make it Nelson's Dockyard. It's a beautifully restored English Harbour with restaurants, cafes and shops. The Dockyard Museum displays Nelson's telescope and tea caddy, summoning up a disconcerting combination of gloomy British history and fresh, Caribbean sun. Try to visit on a day when cruise ships are not docking to avoid the crowds. Beautiful, beautiful, complex Cuba. From the peeling paint in canary yellow and hope-blue in Havana to the rolled tobacco leaves in the countryside and Spanish colonial church bells in Trinidad, Cuba shows most visitors something they've never seen before.

It's trickier to travel here and to travel around but it's perfectly possible to do so independently - and immensely enjoyable.

And get ready to fill your ears with music. Street performances can be found, well, wherever. With more than 700 islands to choose from, some of the best islands in the Caribbean live within the Bahamas. The territory stretches between Florida's coast and Haiti and includes party city Nassau as well as cool, quiet islands in the Abacos.

The most distinctive activity to do in the Bahamas involves swimming with pigs, but make sure you check the eco credentials before you book onto a tour. Some are OK, others not so much.

New Plymouth in Green Turtle Cay also has a surprise in store: loyalists moved here following the American War of Independence and it's a hotch-potch of New England grandeur with a low-key Caribbean vibe.

21 Secret Things to do in Nassau, Bahamas to See More than Just Sunshine
The Painkiller Recipe with Pusser’s Rum and a Slice of History
Where I Went Wrong in the Grenadines
21 Brilliant Things to do in Tortola, BVI
Why You Should Travel to the Bahamas Green Turtle Cay
21 Romantic and Unique Things to do in Aruba for Couples
Bajan Recipes – Flying Fish and Cou Cou in Barbados
Freedom & Slavery in Barbados. It’s Not Black & White
BriBriArtolution – An Experience Inside a Bri Bri Village in Costa Rica
Website Privacy & Cookies