Quirky and Unusual Things To Do in Germany

Enjoy this inside guide to unusual things to do in Germany, moving beyond the intoxicating mix of sweet gingerbread and beer.

Sizzling sausages (some protected by law,) fairytale castles and snow-laden chalets with glühwein on tap take the chill off the history of the Berlin Wall and the shadows from the well documented World Wars.

But what if you’re looking for more unusual things to do in Germany? Well, you’ve come to the right place, so you have.

Here are 7 unusual things to do in Germany, all tested with my own fair hand. The best things to do in Germany - travel ideas and itineraries

7 UNUSUAL THINGS TO DO IN GERMANY

Have you ever heard of the "Buhlbacher Schlegel?" Well, neither had I but apparently it was the prototype of today's champagne bottle (a shape, I'm assuming, you know well :-) )

Buried in the Black Forest in a small town called Buhlbach lives a Glasshütte that celebrates the glass-making skills of ye olde days.

Blessed with sand, water and plentiful fuel, the Black Forest not only became a glass making hub but also came up with one of the best inventions known to man (and woman. Especially woman?)

Standard wine bottles couldn't reliably withstand the build up of pressure and would regularly smash, spilling their precious bubbly contents all across the floor.

Enter Buhlbach and its invention to deeply invert the undersurface of the glass to prevent this catastrophe.

Today, enthusiastic volunteers in period dress guide visitors around the Glasshütte - and if you're lucky, they'll let you blow glass yourself! 2 - TEETER ON A METAL LADDER OVER AN ENORMOUS BLAST FURNACE

Want to really feel like a tiny cog in a giant machine: head to the Völklinger Hütte.

This vast, vast, VAST former ironworks leads the world in being the first of its kind to earn UNESCO world heritage site status for an industrial and cultural contribution rather than just for being pretty. Nowhere I've been before quite spells out the dramatic impact the Industrial Revolution must have had on ordinary people - and presumably the working conditions that many in countries outside Europe still face today.

Arriving alone, with a backdrop of rain, the place feels spooky and overbearing and it's the negative that stands out first. The use of these facilities to make weapons of war and the POWs who were brought here - including the 45 children who were born and died within these metal confines.

But there's plenty to be thankful for, too. Rebuilding destroyed communities, air travel, train travel and everyday items like knives and forks.

For sure, beauty grabs our attention first (and all our likes on social media.) And it was a bold move to grant this place its UNESCO World Heritage Status because it's certainly not pretty.

But it is fascinating. Yes, a part of me did fall in love with the Black Forest. And there's plenty there that's not unusual when it comes to Germany (cuckoo clocks, pine-soaked scenery and the infamous Schwarzwälder Kirschtorte (deep chocolate and cherry Black Forest Gateau. Mmm mmm.))

But there IS an unusual trend afoot: that of learning to cook with local wild plants.

And I fell in love with that at the Parkhotel Ailwaldhof in Baiersbronn-Klosterreichenbach (not the easiest place name, admittedly, but who cares when the food tastes this good?) 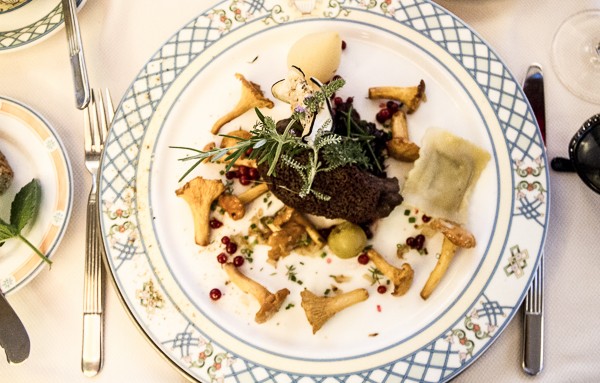 4 - VISIT AN OLD PART OF FRANCE

Borders. In some places, they're immovable, as fixed in opinion as a traffic warden who's half way through writing you a ticket. In other places, and for this I think we can easily count that region known as "most of Europe," borders and identity ebb and flow over time.

One curiously interesting place to witness all this is in the (now) German region of Saarland, that used to be part of France.

At the end of each World War, Saarland passed to French control, only for residents to vote for a return to Germany each and every time.

A visit to the region's capital, Saarbrücken, therefore, reveals glimpses of baguettes, emblazoned roosters and other tell-tale signs of France such as charming restaurants called La Bastille.

Apparently it's known as "saarvoir vivre." 5 - GET INFORMED AT A SAW MUSEUM

Yes, that's right, I'm going to suggest you go and take a look at a collection of old saws.

Just as shoes can teach us so much about the history of the world and everyday life for everyday folk, so it turns out, can saws.

Deep in the Black Forest, saws were lifelines as for century after century, roads failed to penetrate the woods - and the wood was the main way of earning a living.

The development of saws from hand-held man-powered devices to the machinery we see today comes to life in a poignant, poetic way at the Kutscherhaus in Klosterreichenbach. 6 - SEE HOW ANOTHER COUNTRY VIEWS YOURS - ON A ROLLERCOASTER

Move over Disneyland, there's a new mouse in town. EuropaPark (complete with mouse) turns 40 in 2015, welcoming more than 100 million visitors to its land of wild rides and candyfloss (in Germany, they call it Zuckerwatte.)

This isn't the place to delve deep into authentic pan-European culture, it has to be said, but for a look at how Germany views the continent, it offers unbeatable insight.

Spain has flamenco dancers, Russia has a space station and England gets a look in via Scrooge, red phone boxes and Baker Street (sadly, there is no mention of Wales.)

As an added bonus, the central eatery whizzes food down to your table through a computer paired with an elaborate overhead spiral. The city of Karlsruhe enjoys its status as the blueprint for Washington DC and its siring of the man who invented the first pedal-less bicycle.

I took a shine to it, though, for its abundant and mind-bending street art.

From scarlet trucks bending up walls, to houses suspended from cranes and cars stacked in the ground like a rigid floral display, it seemed that everywhere I looked, I found something unusual.

Even the party to celebrate its 300th birthday (young in European terms) found a novel way to party by blazing lights onto the former castle. So that's it for now (and there may be more to come.) 7 unusual things to do in Germany.

Do you have any other ideas?

Disclosure - I travelled to Germany on this last occasion as part of a Captivate project in partnership with the German National Tourist Office. As ever, as always, I always keep the right to write what I like. Life simply becomes too soulless and depressing otherwise!

More About Travel in Germany

To celebrate the soft hues of autumn and freedom from lockdown, we END_OF_DOCUMENT_TOKEN_TO_BE_REPLACED


21 Interesting Facts About the UK That Will Surprise You