Archbishop Desmond Tutu first called South Africa the Rainbow Nation after the country’s first democratic elections in 1994. But there’s more to the story than that… Why is South Africa called the Rainbow Nation

Why South Africa is called the Rainbow Nation

I’d arrived in South Africa, cold and a little wet. The skies brooded deep grey before bursting into a laughter of sunshine, the kind that comes from right inside the belly. Cape Town’s skies are unpredictable, apparently, and they make for a great sky-swept canvas on which rainbows can appear.

Of course, South Africa is the “rainbow nation,” a term first used by Desmond Tutu and later by Nelson Mandela in a post-apartheid South Africa that yearned for prosperity and peace.

Apartheid’s white vs black is well documented around the world but what’s less commonly discussed are the other communities of people who also live here. Beyond English and Afrikaans, Zulu and Xhosa, you’ll find Indian, Malay, and Chinese communities and I’m only just getting started.

Then, and this sounds startling if you’re from the US or UK, there are those who call themselves “coloured,” with pride. It stands for something different here.

Cape Town’s landscape, too, seems borne from rainbow threads. Turquoise beaches one minute, glittering skyscrapers the next. Flat rock and barren green land then rust and red coloured townships beneath silver-grey corrugated roofs. It’s quite unlike home, where concentrated clumps of city fade evenly into the suburbs where character slinks away.

Robben Island stands aloof amid the surf, a beautiful spot for an ugly history: the place where Nelson Mandela spent much of his 27 years in prison.

As for his thoughts on why South Africa should be called the Rainbow Nation, Mandela himself said this:

By now, when the first post-apartheid children have come of age themselves, the notion of the Rainbow Nation attracts criticism from time to time. Its joyful nature criticised for covering up the struggles that still remain.

But it’s an apt term for a country of such incredibly colourful landscapes, cuisine, culture, race and legacy. And, of course, the rainbows themselves that do actually arc across the sky…

Most first time visitors head to Cape Town, one of the most fascinating cities on earth. Here you’ll find Table Mountain and the colourful houses of Bo Kaap.

Second spots include the Garden Route, the Kruger National Park and Durban.

For years, the main hub of Johannesburg was considered off limits to travellers but times have changed. A visit to Joburg rewards with innovation, design, spirit and a look at Soweto, where Mandela spent many formative years. 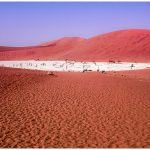 5 thoughts on “Why South Africa Is Called the Rainbow Nation”