Inside an Athens Philosophy Tour: Plato, Socrates and Studying in the Nude Inside an Athens philosophy tour

Join the world’s philosophical heavyweights in an Athens philosophy tour. Thousands of years have passed and yet we’re still all working on the pursuit of happiness. Apparently, searching for happiness is a modern, millennial affair. We’re told we’ve lost touch with what makes life meaningful, ablaze in a flutter and clutter of status updates, selfies and self-centred notions of me me me all the time.

This idea, of course is nonsense.

But it’s in the shade and the shelter of Athens, that one of the oldest pursuits of happiness took time to percolate around.

Athens, famed for its hilltop Acropolis, its white-pillared stone democracy and somewhat unfortunate use of slaves, marks the spot where not only did wise men walk the ground debating these things, they took the trouble to write them down.

And that ushers in some of the most spine-tingling retracing of steps that thinking and travel have ever produced.

Far From the Tourist Track: The Original Site of Plato’s Academy

I meet Georgia Sermamoglou-Soulmaidi, a docent from Context, beneath a battered umbrella rendered futile by the storm.

I’m told that rain is rare in Athens – but when it arrives, it does so with all the wrath of a vengeance from the gods.

The scorched earth and silver-barked olive trees look lost in the rapidly rising swamp as the lowly ruins that were once so important fill with terracotta pools pockmarked by vicious rain.

There’s no sign of tourists here, nor anyone much at all.

It’s quiet, green, serene – and thought to be the original stomping ground for Plato and his Academy. 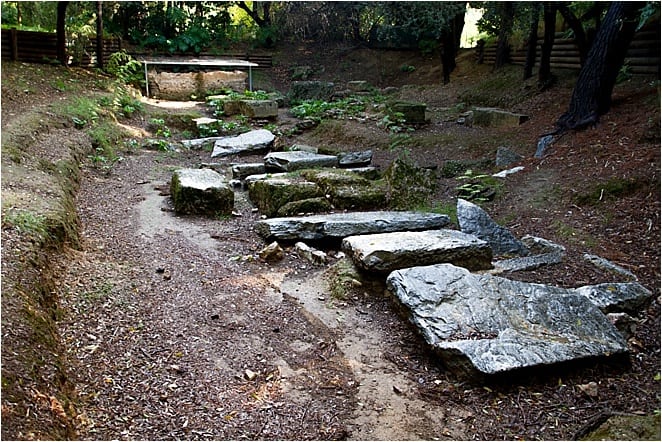 Was this where Plato taught philosophy in Athens?

A Refresher in Greek Philosophy

The whole story begins around 400 or so BC, when Athens had entered into a drawn-out war with Sparta and the great experiment with democracy was beginning to falter as Athenians began to lose their power.

Socrates, widely credited as being the father of western civilisation, spends his days antagonising the great and good by subjecting them to what has now become known as the Socratic Method.

Close to a modern day cross examination, it involves asking someone to define a subject (such as justice, virtue or love) before using general examples and further questions to expose the insufficiency of the answer. If you’ve ever been on the receiving end of this kind of questioning, you’ll know it usually makes you tempted to throttle the questioner.

In fact, in ancient Greece, this instinct was taken a step further as Socrates was tried, convicted and sentenced to death for his line of philosophy (technically asebeia: corrupting the youth and failing to acknowledge the gods that the city acknowledged.) In a perverse twist, more judges voted to kill him than had found him guilty in the first place, so infuriated did they become at his manner of communication. Vengeance and philosophy in ancient Athens

Plato, the Cave and the Matrix

Not everyone was enraged, however.

Plato, a younger student, became so enamoured that he abandoned his own political career to become a philosopher himself, travellign and studying across the Mediterranean before returning to Athens to establish his own Academy (often claimed to be the oldest university in the world, since it taught more than purely philosophy.)

The swiftest shortcut to understanding Plato’s world view lies in his story of the world as a cave. All the men and women lie chained to the floor while behind them, monstrous gods hold puppets in the firelight to cast shadows on the wall in front of them. All the people can see and all they know are the shadows ahead until one day, one escapes from his chains and turns to see the truth, the real reality behind. Greek shadows and philosophy in Athens

It is, of course, a low-tech version of Keanu Reeves and the Matrix.

Both Plato and Socrates, in essence, believe that virtue and higher truths lead to happiness and freedom more than worldly goods and tokens of status.

They believe that questioning what we believe to be true is the equivalent of turning from the chains and examining reality for what it is. When it rains in Athens, it doesn’t mess around

Where It All Happened

To spend the time with an educated mind discussing ideas such as these, is a deep-seated joy that life seldom affords.

To walk among the stones and along the soil where Plato stood and uttered his words thrills the soul in a way that’s hard to explain.

Here, Plato taught his best student and the future philosopher to Alexander the Great: Aristotle. Great minds from the past

Of course, the lofty imaginings were only slightly undermined by the discovery that young men in Ancient Greece would often exercise and study in the nude (apparently the word gymnasium actually means “school for naked exercise.”)

A brief flashback to my own school days is enough to make me glad that we didn’t adopt everything from Ancient Greece .

And just like that, my two hours are up.

Back to the Rest of Athens

I’ve been allowed to question ancient Athens, the role of religion, of goodness, justice, virtue and the disquieting notion of slavery in the much lauded Athenian development of western democracy.

My mind and soul is left fizzing and buzzing and turning its thoughts around, one over the other.

Even the clouds have cleared from the sky.

As our footsteps squelch through the mud of history, Georgia folds up her umbrella and returns us to the tarmac road. I received a complimentary tour from Context for review purposes. As ever, as always, I kept the right to write what I like: mud, naked exercise, philosophy and all. Otherwise, without such truth, as these great philosophers would say, what is the point of life?

I’ve worked with Context many times by now and I’m always impressed at the depth and level of detail their tours provide. Once you’ve “seen the sights” somewhere, I’d highly recommend making time for one of their lengthy, small group tours to really start to get an understanding of a small part of a place’s history. If you book through the link above, I receive a tiny amount of commission, which helps keep this blog on the road. I rarely run these kind of affiliate links and only ever do so for companies or products I’m passionate about. I trust that the reason behind this is obvious.

Have you ever studied Greek philosophy? Would you join an Athens philosophy tour?

The Best Things to do in Kalamata, Greece, and Around. Starting with those olives…

Finding Hidden Gems and Unusual Things to do in Athens: Gold Beyond the Acropolis