The Best Helsinki Souvenirs To Make You Think, Smile and Love Looking for the best Helsinki souvenirs and wondering what to buy in Finland? Here’s our inside guide to the most characterful things to buy in Helsinki.

Finland knows how to make the most of small, dark red berries.

Lingonberries, sea buckthorns and bilberries also make into the world of lakkahillo (preserves) but in all honesty, the name just isn’t as poetic. Cloudberries simply have the best name.

To the uninitiated, the flavour is slightly similar to the cranberry, just a little sweeter and less caustic.

When Finland celebrated 100 years of independence in 2017, it voted rye bread as the national food of choice for the celebrations.

Present on Nordic soil for over 2000 years, the rye grain can survive the short summers of Helsinki. Many families have their own leivän juuri or leaven passed down through generations to make their own bread.

As you’d expect, there are regional varieties but the types you’ll find in Finland are typically less dense those found in their German or Baltic counterparts.

Still not convinced rye bread makes a great Helsinki souvenir? Many Finns travel with their own rye bread. Like tea for some English, it’s a creature comfort that doesn’t always translate.

Somewhat cruelly labelled as a sweet for unsuspecting tourists, salmiakki derives a key component of its flavour from the addition of ammonium chloride. Yes, that’s right. It tastes about as harsh as it sounds.

Salmiakki may still look like ordinary liquorice, itself an acquired taste, but this is saltier, stronger and sassier than normal.

And it’s a flavour that’s unforgettably linked with travel around Finland, a childhood memory that never really leaves many Finns. Or so I’m told.

Taste it first. Or at least have a plan on how to handle things before you buy a big bag to take back to the office… Moomins. You can even have a coffee with them while looking for souvenirs…

There’s a Moominland but it’s in Naantali rather than Helsinki. But stock up on these lovable pseudo-hippopotamus like creatures in various other forms: place mats, lunch boxes, T shirts and plastic figurines.

Lightening up the grey skies with bright pops of colour and poppies, Marimekko made a name for itself in the 1960s and doesn’t see the point in stopping to look back.

Founded in 1951 by Vilno and Armi Ratia, this Helsinki based company produces high quality linen, home furnishings and fashion.

This also makes it a fantastic Helsinki souvenir, since every budget is covered. Glasses cases at one end, a brand new wardrobe at the other.

Co-founder Armi originally wanted to name the company Armi, after herself, but the name was already taken. Her middle name was Maria and Mekko means “dress” in Finnish. From there, Marimekko was born.

The Finlandia brand formed in the 1970s as part of a state run alcohol beverage company but ownership has now passed to Brown-Forman.

You won’t struggle to find it outside Helsinki (it’s distributed in 135 countries) but there’s something about buying a bottle in the land where it all began.

If neat vodka is too hardcore for you, then you’ll also find mango, lime, grapefruit and tangerine versions available.

If you’re willing to run the gauntlet at customs, then consider a puukko hunting knife as your perfect Helsinki souvenir.

Less dramatic than it sounds, blades have a single curved cutting edge and are designed to be attached to belts or buttons through (often decorative) leather pouches. They’re handy for slicing fruit and salmon as well as, well, more bloodthirsty hunting activities.

Depending on where you’re travelling to, this might be one to admire from afar and leave well alone. 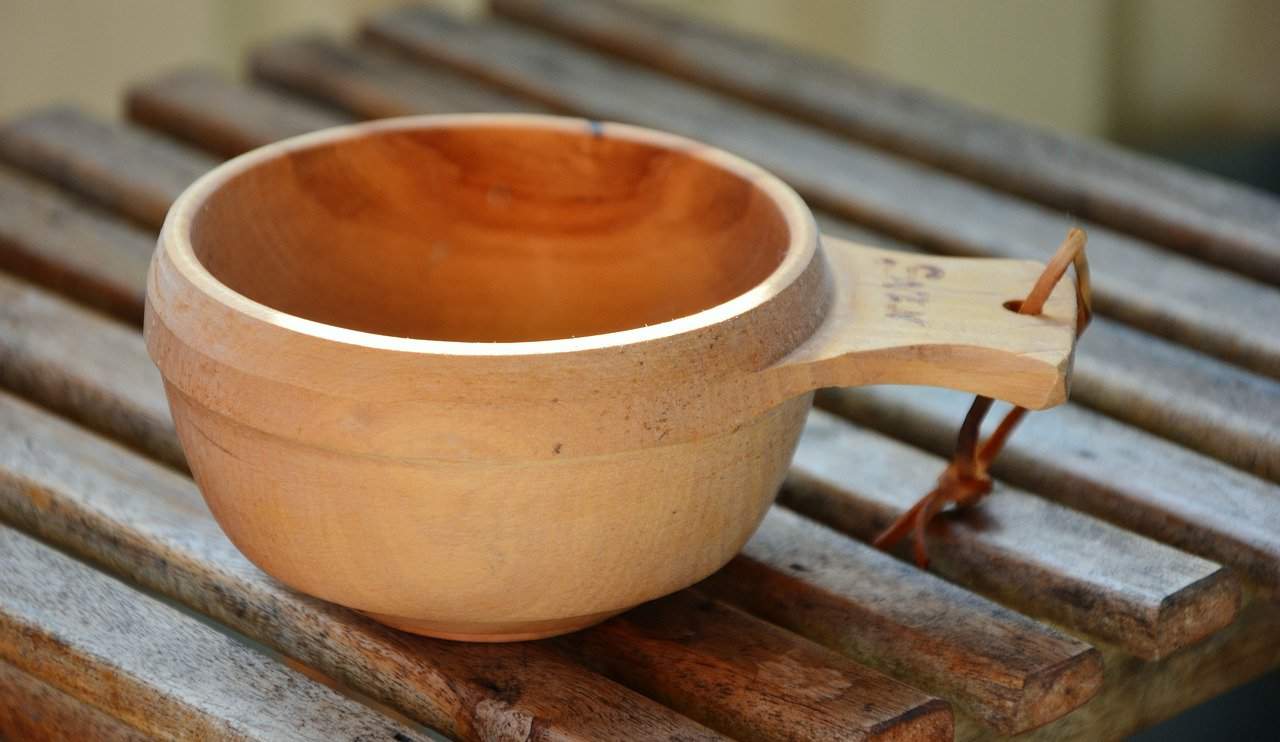 Everyone needs a kuksa cup. That spare change has to go somewhere…

A kuksa is a wooden cup that no outdoorsman (or woman) would be without. Carved from birch burl, it’s probably safer to say it has Nordic origins, but it still makes it to the hot list of Helsinki souvenirs.

Why? Because it’s practical, not some plastic tat that will gather dust in your house until it eventually makes its way to a charity shop, together with all those cookbooks you never actually use.

A kuksa hails from the guksi of the Sami people who live further north in the Arctic Circle. A well made cup would last a lifetime, being only rinsed with water and dried with a cloth, no soap involved.

“If you copy something old, you must also create something new.”

So said Elsa Heporauta, cofounder of the Kalevala jewellery range in 1935. The project initially began to raise funds for a statue to commemorate the Women’s Association but eventually morphed, by committee, into an ambitious new goal.

The Kalevala Jewlery takes inspiration from historical pieces found in the National Museum of Finland and twists them into new pieces. The company remains owned by the Kalevala Women’s Association.

Fazer began life as a Franco-Russian confectionary in Helsinki in 1891 but now dominates the Finnish food industry and exports to more than 40 countries.

Its signature product, however, is its milk chocolate (Fazerin sininen) and salmiakki-flavoured Fazer blue.

So if the strong salmiakki is not for you, pick up a more widely accepted taste in the form of some Fazer chocs. Shop for textiles as well as for smaller souvenirs

The distinctive ryija rugs or tapestries brighten up windows around Helsinki.

Originally made from natural colours, the arrival of various vegetable dyes in the Middle Ages transformed them into scarlet, green and royal blue tones as the centuries wore on.

Today, of course, new fibres like paper cord join the traditional favourite, wool. Prices can reach 3000 – 5000 Euros for a classically large size. You may be able to pick up a second hand ryija but it’s often harder to know where it came from.

Finland, in case you didn’t already know, gets cold. And woollen products keep you warm. Yes, you probably knew that too but I thought it was worth repeating in order to get it to really sink in.

Firstly, it’s highly recommended to wear natural fibres, such as wool, anywhere where the temperature drops to below freezing (and the Arctic circle, where people live and have done for centuries, regularly drops below minus 40.)

Second, this fact has generated centuries of woollen handicrafts and knitwear from across the regions of Finland.

Pick up a small pair of gloves or full Nordic sweater as a functional and cosy Helsinki souvenir.

If the words fermented, low alcohol mead don’t fill you with delight, you’re forgiven. Sima may come from fermenting honey and water but its method of production results in a light, sparkling, almost soft drink, one that often comes spiced with the skin and zest of a lemon.

It’s often served with a munkki donut and tippaleipä, a Finnish funnel cake associated with the Vappu festival on May day.

Shaped like a ruffled snowshoe, karelian pastries pop up everywhere in Helsinki, from breakfast buffets to afternoon snacks. They’re a savoury treat with a thin rye crust and a hearty, comfort food filling of barley or rice smothered with cheese.

Butter and boiled eggs also sometimes put in an appearance, depending on the chef’s preference, and they’re the perfect warming dish for Helsinki’s many cold days.

So how do they work as a souvenir?  Scoff the lot yourself and buy a cookbook to remember the time when your stomach was toasty and happy…

Today’s Arabia ceramics may be produced in Romania and Thailand, but Helsinki was home to the original and the brand has left its mark.

Many Finns seem proud of the fact that they drink more coffee than anywhere else on earth. It seems fitting, then, to take home a coffee cup as a souvenir of your time in Helsinki.

For the musically inclined, a kantele makes for a great Helsinki souvenir as you can bring the sound of Finland home. For the rest of us, it also looks good on a shelf or a wall.

It’s a cross between a zither and a harp, with prehistoric origins and traditions infused with poetry. Traditional Finnish sage  Väinämöinen is credited with building the first one from the jawbone of a giant fish and with strings from a maiden’s hair.

Luckily, today’s versions tend not to require such wild exploits in the sea.

Originally made with only five strings, fashion saw the addition of more and today you’ll find a  range of sizes and string numbers to suit your taste.

Don’t dismiss this as a tourist gimmick; saunas really are a staple of life in Finland, even in Helsinki. While you can head to a public sauna as a visitor, most families and apartment blocks have their own and that’s why you’ll find wooden sauna buckets and ladles available for sale.

Of course, if you don’t have your own sauna at home, you probably wont’ get to use it much. But since they’re made form birch wood, at least it will still look pretty. And you can use it store all your loose travel change so you can find it easily again next time ;-) What is Helsinki famous for?

Helsinki is famous for its keen sense of design, toasty warm woollen clothes, sauna and salmiakki. And, of course, the white and lovable Moomins.

What can you bring back from Helsinki?

The best Helsinki souvenirs are those you can easily bring back from Helsinki. I’d recommend a design piece, perhaps some Marimekko or Kavela jewellery and a ryija rug. For food, look for cloudberry jam and the acquired taste of salmiakki.

What can you buy in a Helsinki supermarket?

Pick up some of the best Helsinki souvenirs in any local supermarket. Look for cloudberry or lingonberry jam, Fazer chocolates, Finlandia vodka, rye bread and salmiakki.