The tale of the Salamanca frog twists and turns around the beautiful streets and stone carvings of this Spanish university town. Here’s how to find it. And what happens when you do.

Also, check out our fun quiz with these questions about Spain.

For centuries, the university town of Salamanca has entertained students, children and visitors with a game of “spot the frog.” As the oldest university in Spain and third oldest in the world, Salamanca knows how to spin a good tale.

Ours starts at the entrance to the Universidad Civil, an immense sandstone carving that rises towards the sky. There, amid the carved stonework above the Puerta de Salamanca facade, lives the all important Salamanca frog.

Spot it and you’ll have good luck in the following year. Especially in exams.

The frog is small, the carving intricate. Even when you know what you’re looking for, it can take some time. How to Find the Frog in Salamanca

But before we spill the frogspawn on this 16th century masterpiece, what is the frog of Salamanca really all about? Why would you find a skull with a small amphibian clinging on for dear life?

Well, the skull represents Seville’s Prince Juan, who died in 1497 before the facade was completed. Academics believe that the frog represents the prince’s physician, Doctor Parra, who frantically tried to save the prince’s life. Locals also call the Salamanca frog La Parrita, or the little Parra, another nod to this story of origin. Closing in on the frog…

So, how to find yourself some good luck as you travel in Spain? Look for the skull on the right hand side of the facade.

And find the mysterious frog of Salamanca. A few streets away, you can play similar games with the facade of the New Cathedral (new in this case means that work began in 1513.)

Amid the apricot -hued, ornate monuments, look out for a gargoyle eating ice cream. And a new visitor from a 20th century restoration project. The astronaut of Salamanca. 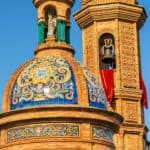 8 thoughts on “How to Find the Salamanca Frog, Spain’s Mysterious Promise”