What is it like to eat at El Celler de Can Roca? Eating by Numbers at El Celler de Can Roca: Three Brothers Win the Number One Ranking

In the space of five minutes, we’ve travelled through five countries: Mexico, Peru, Lebanon, Morocco and Korea. Each stood balanced on a circle of wire; each had a shell that collapsed on the first bite. It’s a lot to take in.

Lime, miniature mint, translucent gel and the relief that I’ve passed the quiz. I don’t get to bathe in the shame of geographical culinary ignorance. At least not today.

What I do get to do is dine at El Celler de Can Roca, recently voted the second best restaurant in the world. And, while I can’t believe my luck, it’s actually my second time here.

Second is a curious word in the English language. A fleeting moment of time. A numerical order of position, inferiority often implied. Yet as a verb, second means to show agreement and support.

My mind drifts towards numbers so much because El Celler de Can Roca has such an obsession with them themselves. Not with coming second, that never gets mentioned. But they certainly have a soft spot for the curvy number three.

The Second Best Restaurant in the World

A metallic R hangs on the weathered wooden wall that contains this restaurant. The R has three stems. Speckled rocks wait on the white tablecloths. Not two, not four, but three. The dining room is triangular. It takes three bibles to list the wine. They even have three Michelin stars (ahem.)

Despite the Spanish location, this isn’t about Catholicism and (as far as I can make out) it isn’t a numerical fetish.

It reflects the underlying principle of the place: Can Roca is run by three brothers – Joan, Josep and Jordi.

Joan handles the savoury courses, Josep takes care of the wine and Jordi is all about the dessert.

The sooner my younger brothers develop skills like that, the better. 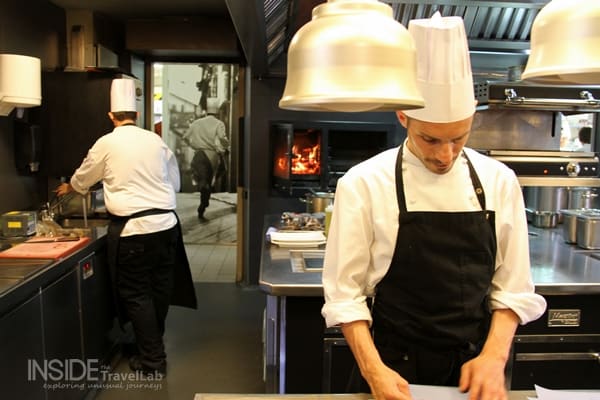 Inside El Celler de Can Roca

The restaurant itself is gloriously unpretentious. A small patio with cut grass introduces the glass walled reception and restaurant. Guests frequently get to see the kitchen and wine cellar. As press, of course, I get a few extra privileges. The chance to look like a professional, I suppose, instead of a raving fan or stalker as I trail these three men with a lens and ask them to step into the light.

The kitchen, like the chefs, is ready for its photoshoot. Surfaces gleam. Brows look furrowed, but not too much. Chalk scribbles across the blackboard and the flames burn dutifully behind black, rectangular ovens. The air fills with the sound of action but the scent of what’s cooking doesn’t suffocate the air.

Through the hum of organised activity, I catch a few surprises. Olive trees as bonsais lined up on a silver counter. Salmon-pink prawns splayed open on stacked slate. Swift fingers distributing something that looks like moss.

Ten minutes later, I see the olive trees again, glass of cava in one hand and camera, notebook and pen clumsy in the other. Caramelised olives dangle from spikes on the trees.

I try one, then two, then three. Sweet blends with bitter and I’m in danger of writing an ode to an olive, it tastes that good.

For all the talk about kitchens and numbers, I haven’t yet told you about the food. I’m in danger of writing an ode to an olive, it tastes that good

"How many courses are there?" I ask the waitress gliding by.

She struggles for the English word but sums it up well with her answer: "Lots."

After our geography lesson, we truly begin. I make notes, take photos and close my eyes to taste but I'm sure we hit seventeen courses, possibly twenty depending on definitions.

Our palates switch from dishes loyal to Catalonia (St George's mushrooms appear a few times) to international affairs (curry caramelised walnuts accompany the pigeon.) And goodwill is extended towards the rest of Spain through the black olive gazpacho, Iberian suckling pig and the fino from Jerez.

In fact, goodwill seems to ooze all around. As Quim Casellas, the chef from nearby restaurant Casamar, said "Ferran's the household name and the symbol. The glitz and the glamour. But the Rocas are like your papa. They're like your father, your family."

And just like your family's cooking, there are things you don't like. For me, the gingered cherries with smoked sardine was a step too far and while the splayed prawn displayed deconstructed drama, it didn't suit my tastes. But enough of my words. Food like this is an art - and an art that deserves to be seen. And as for being second best? I'd like to end on a quote.

"Second place is just the first place loser." Words from a man who died trying to win. Disclosure: I visited El Celler de Can Roca as a guest of the Costa Brava Tourist board. All opinions, photos and numerical fetishes are my own.