The mighty Amazon River may have achieved worldwide fame. But the story of its origins remains known to locals only. They call it El Encontro das Águas. The Meeting of the Waters.

The Meeting of the Waters

Some say it’s a sixth sense to know when someone’s broken into your room. Cold prickles on the neck. A shadowy presence in the corner.

Well, that wasn’t the case for me. The first five were enough. The sound of the water running, the sight of the ransacked room. And the shadowy presence that leaped from the corner, met with a scream, a slam, a thudding and thundering in the ribcage on my part.

And then silence, while I scanned around the room for more.

Were there any more? What even were they? What had just happened?

Then it all became clear.

In a smooth expression of sass, a flash of black fur and a menacing smile, the monkey threw my opened water bottle back at me and closed the door. In a final gesture of defiance and supremacy, she stretched out and lay down on my hammock.

The result was clear. Amazon jungle – one. Foreign traveller – nil. From the Amazon to Lockdown

As I sit down and write this now, six months since lockdown rippled around the world, I can hardly believe it happened.

Did I really manage to fly from London to Brazil and take a boat deep into the Amazon? And was it really easier to organise than finding my daughter an Easter Egg only a few weeks later this year?

Just as I stood in that room, confused, with the Amazon swirling below, so I have sat in the house for months, wondering what on earth just happened.

There’s much room – and need – for reflection on coronavirus and the events that changed so much so fast. But I’m not sure I’m ready for all that yet.

I want to think back, I long to think back to a time and a place where walls didn’t block off the view of the sky. How to Travel to the Amazon Rainforest

To travel to the Amazon rainforest is, in and of itself, a journey that can take many forms. The basin crosses nine countries and includes more than half the world’s rainforest in an area of more than 2.7 million square kilometres. It’s obvious that you’ll find more than one way to visit these “lungs of the earth.”

But in Brazil, the main way is via Manaus, a curious, contradiction of a place with a gilt-domed opera house, traditional markets and sprawling concrete tower blocks.

And it’s from here that you’ll board a boat en route to the Amazon River, pausing at a very significant place: el Encontro dasÁguas.

El Encontro das Águas. The Meeting of the Waters. As ever, things sound more poetic, more adventurous and more alive when they’re written in a foreign language.

When faced with the reality, the poetry disappears. The water below contains man-eating piranhas and fish the size of raging bulls, with temperaments to match. This is a place where anaconda roam (though not in the water, at least.)

Is it really such a good idea to dip my hand in on behalf of a geography lesson ? That’s what the captain thinks I should do.

Only then will I understand the importance of the meeting of the waters. The Meeting of the Waters

The confluence between the dark chestnut Rio Negro and the latte macchiato Solimōes River runs for 3.7 miles. There’s a difference in speed, as well, as colour, with the Negro notching up 1.2 miles per hour at a balmy 28 °C, while the Solimōes chills at 22 °C but with a zippier 3.7 miles per hour.

Once combined, it becomes the Amazon River, a vast waterway that engulfs trees twice a year, meaning that houses need stilts at least 15 metres high – or else they need to float.

Right now, though, we’re far from the floating houses. We’re in the midst of the vast, flowing Amazon, not the inlets and tributaries. We’re on the part of the water that can be seen from the sky, the smoky outlines and wooden jetties of Manaus in grey on the horizon.

We are, quite simply, at the meeting of the waters: dark chocolate water on one side, caramel on the other.

No matter how much I’d read about this, to see it with my own eyes changes everything.

But will I overcome my fear and feel it with my own hands?

The captain smiles, encourages but I can sense the impatience too. Returning from the Amazon and into 2020

By now, I’m on the return journey from the Amazon. Before long we’ll be back in Manaus. Over the last few days, I’ve sat still while the eyes of crocodiles sparkled in the dark. I’ve not flinched when a piranha chattered at my feet. Perhaps most important of all, I’ve even learned to lock my door every single time after that black furred intruder who stole my home and hammock.

How can we live in this world if we sit with fear and forego our trust?

The time for waiting is over. I dip my hands in on one side, he skilfully turns the boat. One hand in the Rio Negro, one in the Solimōes. One warm, one cool. Just in this moment. Just for these three point seven miles. And then it’s time for the two to mix together, to power into the Amazon and power on to the shore.

Perhaps one day, this is how we’ll see the year 2020. The old, the new, running alongside, so visibly different, so unexpected and strange.

And then, our time will mix and flow together again to power on into the future.

And  2020 will remain a surprise point in our memories.

Just like El Encontro das Águas. The meeting of the waters. More About Travel in the Amazon

For more information on how to travel to the Amazon and what to do in the Amazon, head here.

We also have a handy packing list especially tailored for the trip. What to wear in the Amazon rainforest will sort out your jungle clothing headaches! 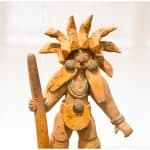