The Best Places to Visit in the Middle East

Where do you start when describing the best places to visit in the Middle East? It’s a beautiful and complex region and here’s our inside guide to the top things to see and do.

The Best Places to Visit in the Middle East Oh, Petra. The swirling, raspberry ripple rock canyon that leads to a secret city is the stuff of dreams and legends, not real life. But real life it is – and it is open to the public to visit.

Build by the Nabateans around 300 BC, its existence faded from popular memory, known only to local Bedouin who called it home. An expedition by a Swiss explorer in 1812 brought it back to the world’s attention and now it ranks as a UNESCO World Heritage Site and one of the “Seven New Wonders of the World.”

Situated in Jordan and accessible from a number of local hotels, you can also visit Petra as a day trip from Amman, the capital.

Plan to leave at least a day to explore the site, more than that for those who truly love archaeology or hiking.

Is it safe to visit the Middle East?

That, of course, depends on where you are going and who you are.

Some countries, like Jordan, Oman and the U.A.E welcome international visitors and have a good safety record. Others, such as Syria and The Yemen, are currently in the midst of bloody conflicts and should not be considered tourist spots.

Don’t forget you’ll need to organise your paperwork. This depends on both the country you are visiting and where you come from. For example, for UK citizens you can currently obtain a visa on arrival in Jordan. While elsewhere, you can investigate whether or not you need a Kuwait eVisa for GCC residents online. Always be sure to check and double check before booking and then again before travel. Reading in the Dead Sea Jordan

At the lowest point on earth, you can feel lighter than ever. While technically, the Dead Sea is a lake rather than a sea, who cares about that once you’re floating around reading a newspaper?

With a salinity of 33%, its buoyancy means that people can float although it’s very difficult to swim.

You can visit the Dead Sea from either Israel or Jordan and stay for one or two nights in any one of the resort hotels that overlook the water. The thick, molasses like mud is supposed to carry in it the secret to eternal youth. Worth a try, right? At the Mleiha Archaeology Centre in Sharjah: important finds as humans travelled from Africa to the Middle East and then beyond

Mleilha may not be the most famous place to visit in the Middle East but perhaps it should be. It’s thought to be the place where the first humans who left Africa settled around 120 000 years ago.

You can visit the Mleiha museum and excavation sites or else simply head out into the dunes for a spot of dune bashing and swerving and sailing over sand. . Often overlooked by its more glittery sister Emirate, Dubai, Sharjah prides itself on its sense of culture. The Sharjah Museum of Islamic Civilisation and the train station shaped Sharjah Central Souk each stand out, as does the cultural area the Heart of Sharjah, which is currently aiming for UNESCO World Heritage Status.

But visit during the Sharjah Light Show to see a more modern, creative take on the traditional features of the Middle East.

The Roof of the Emirates

Ras al Khaimah translates to mean the top of the tent, and Jebel Jais explains that. Not only is RAK the northernmost Emirate on the map but Jebel Jais is the highest point in the United Arab Emirates. And some bright spark has gone up there with a very long wire you can now zipline across the sky with only the desert rock below.

If you’re interested in that but also want a touch of relaxation and cultural exploration, check out this article on things to do in Ras al Khaimah. Israel’s second largest city, Tel Aviv, rocks onto the Middle East highlights list with its vibrant beach scene, collection of art galleries and the mystique of the historic area, the Old Jaffa.

As one of the oldest cities in the world and a holy city for the religions of Islam, Christianity and Judaism, Jerusalem carries a gravitas perhaps unmatched by anywhere else in the world. Gleaming skyscrapers sprout between ancient buildings and pilgrims and entrepreneurs alike call the place home. The Citadel in Amman

Amman, The Oldest City in the WOrld – Ish

As the self-proclaimed oldest continuously inhabited city in the world, scholars may quibble over the details but the rest of us can simply stand back and be amazed.

The camel coloured rooftops of Amman spill across the mountaintops, the call to prayer greeting the birdsong at sunrise and sundown.

Highlights include the citadel and the fingers and elbows of the once mighty statue which stood here.

Located in Abu Dhabi, the capital of the United Arab Emirates, not only is the Sheikh Zayed Grand Mosque a strikingly beautiful site, it’s also the largest mosque in the country.

For clean lines and architectural genius, The Sheikh Zayed Grand Mosque is difficult to surpass. It’s one of the most famous landmarks in the Middle East for this reason.

You can visit from Abu Dhabi or visit as a short drive from Dubai Airport.

Subtle, the Burj Khalifa is not. As the tallest freestanding building in the world, its tip pierced the sky in 2010 and the record has yet to be broken. The Roman Ruins of Jerash

Located a short day trip from Amman, the capital of Jordan, the eery, echoey streets of Jerash will stay with you long after you’ve gone.

It’s the biggest preserved Roman city outside of Rome but unlike Rome, modern buildings haven’t threaded their way around the ruins. In Jerash, you can walk amid the crumbling columns and see exactly how the layout would have been.

Sur, Home of Sinbad the Sailor

Children the world over grow up hearing about the tales of Sinbad the Sailor, but in Oman, at least, he is real. Fabled to have come from Sur, if you visit today, you can still see the shipyards where traditional wooden dhow boats wait for their chance on the sea. 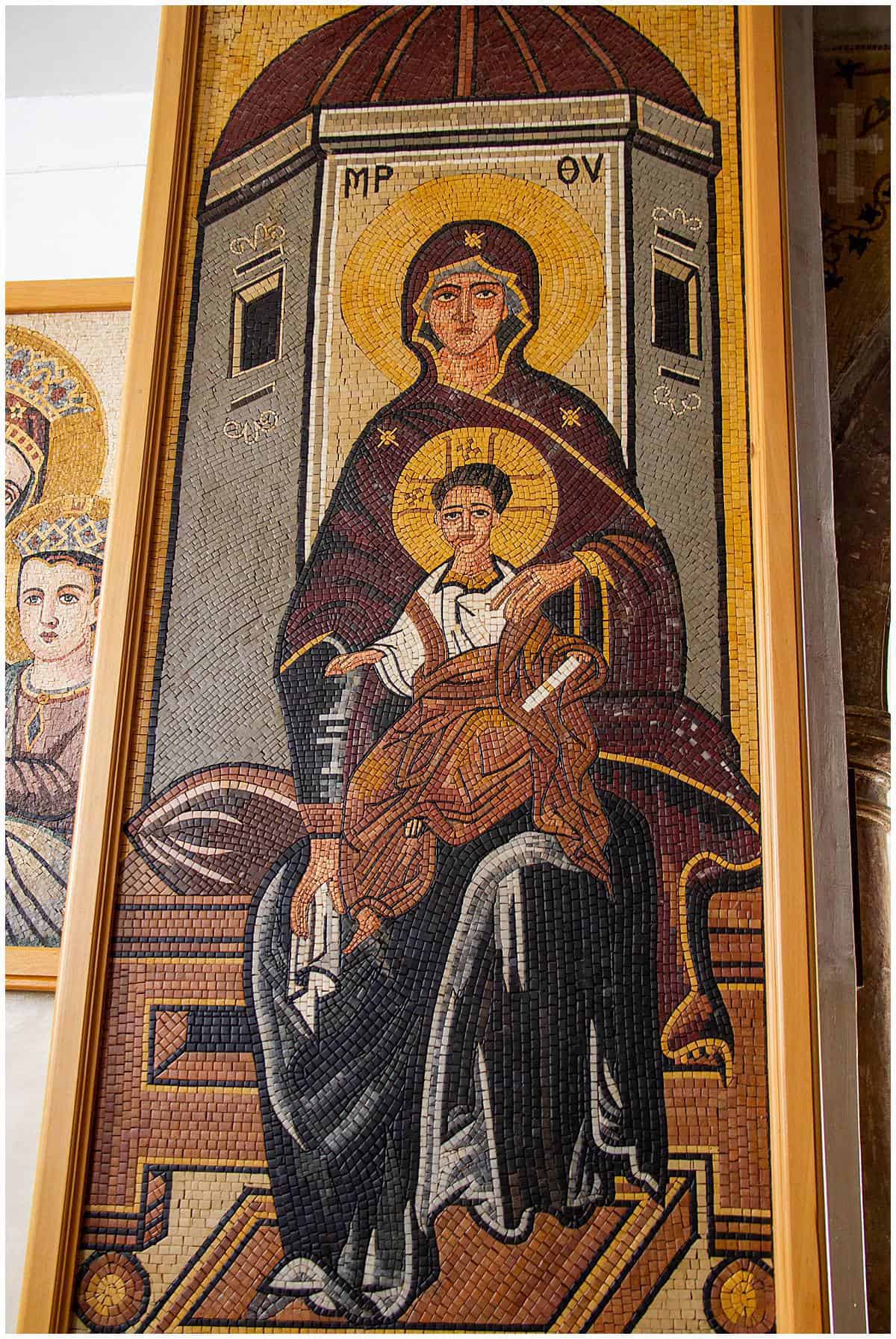 Madaba: famous for mosaics but there’s more to the story than that

The Mosaics of Madaba

The Jordanian city of Madaba hosts one of the oldest maps in the world of hotly contested maps: the Holy Land around Jerusalem. Local craftsmen are skilled in the art of mosaics and you can find the art across the city. Mpre recently, Jordan has started a new project: inviting guests to add their own pieces to a new mosaic to set a new world record depicting the King’s Highway. I’m passionate about sustainable tourism and travel. And the Middle East has one of the most striking eco lodges in the world.

The Feynan Ecolodge in the Dana Biosphere Reserve leads the way in terms of reinventing how we can travel and make things better rather than just reducing harm. Built in a reclaimed archaeological site, they use candlelight and solar power and heavily involve local communities. You can go stargazing in the desert, see an old Roman copper mine and drink coffee with local Bedouin around an open fire. Does food qualify as one of the best places to visit in the Middle East? If not, it should! The food is a central character on the Arabian peninsula, bound as it is with the strong tradition of hospitality and welcome.

Coffee with cardamom and dates form a staple of social life. And while dishes do vary from country to country, you’ll find remarkable similarities as well.

In fact, the whole idea of dining in the Middle East bases itself around the idea of sharing platters and breaking bread together.

Look out for plenty of hummus, pitta, tabbouleh and baba ganoush.

Where is the Middle East?

The Middle East has a few different definitions but broadly speaking it involves the southern and eastern shores of the Mediterranean Sea, the Arabian Peninsula and, variably, North Africa, Iran and Iraq.

Getting to the Middle East

The Middle East is one of the most connected hubs in the world. Airports in Dubai, Tel Aviv, Amman, Muscat and Riyadh connect to major cities across the world.

Within the Middle East, outside the cities, it’s generally better to hire a car (or a car and driver) to get around. Within the cities themselves, a car can be a mixed blessing. In general, I’d suggest arranging transfers to your accommodations and tours if needs be before picking up a rental car. However, look at the country specific information before making your final decision.

Most of the places listed here are fairly straightforward to get to: their brilliance and worldwide fame has led to transport infrastructure being developed to put tourists at ease.

Travel tips for the Middle East

While the Middle East covers a large region and there are region specific differences, the following travel tips apply in most places here:

Elsewhere in the Middle East

Trying to whittle down a list of the best places to visit in the Middle East was always going to miss places out. For this collection, I’ve taken the smallest definition of the Middle East and purposely avoided areas where it’s currently difficult for international tourists to visit. Obviously, please check safety advice from your own government and not this blog.

However, it would be remiss not to mention the following:

More About the Middle East The Best Hidden Gems in Dubai Your Dubai Packing List: Including What to Wear in Dubai