Appearances matter in the highest capital city on earth. But not in the way you might expect. Wander the streets of Quito’s Old Town with me and see how Ecuador has reinvented itself…

The Highest Capital City on Earth

In a quiet corner on a dusty shelf in the highest capital city on earth, the tip of a paintbrush moves slowly. The paintbrush ignores the debate that surrounds the high altitude claim ( La Paz in Bolivia claims 3650 metres to Quito’s 2850, but its shared capital status with Sucre and that city’s measly 2750, lets the side down.)

The paintbrush cares nothing of this, however, as it dips and dabs and dots at a different sort of crown.

The sort a wooden baby Jesus would wear in a conservative religious household in which such regal statuettes are common.

So common are the Jesus figurines – or family mascots – that baby Jesus spotting becomes a pastime as the pigeons flutter across the cobbles and the devout carry them to and from church.

In the shops that cling into the alcoves of the Old Town, amid the Mickey Mouse piñatas and the medicinal local herbs, baby Jesus outfits stand for sale, with tassels in silk and gold.

The custom, I’m told, is to dress your baby Jesus to match household breadwinner.

With a taste for high fashion

Thus, there are police baby Jesus outfits and stethoscopes for baby Jesuses. Various firefighter hats and business suits and yet others that I suspect in another time and another age would lead to charge of blasphemy.

But, however attired, these babies are cherished. They grow to become family heirlooms – and when they burn or break there’s one man to the rescue. Inside the Restauraciones Carrión, the shelves look like a bric-a-brac sale in the aftermath of a bison stampede.

Virgin heads, cherub wings, and lots of baby Jesuses lie one atop the other in a scene of crazy carnage while one or two in particular sit on the counter top ready for repair.

The paintbrush moves slowly across one. It pauses while the artist shows me other figures – Jesus with moving eyes, a decapitated Virgin Mary and a burned-beyond-recognition baby Jesus requiring the soot be scraped from upon him. Señor Carrión mixes oil and pigment and moves from chubby figurines to the scars on the face of the man in front of him. Such camouflage lasts for three or more days, he tells me, and as many men as women attend to receive his services when special occasions hove into view.

“My passion is art,” he tells me, gesturing to a collection of non-religious artefacts behind him, the handiwork in which he is most proud.

“And I consider myself an artist.”

We part, on these terms, me pondering the age old question of balancing art with that of earning a living.

I leave this hidden corner of Quito to climb up, up and and up. The End of Up

At the end of up, however, the religious imagery returned: the legacy of the conquistadores, now renovated and repackaged as Quito’s own.

Through 7000 pieces of aluminium, Quito adds a further 45 metres to its skyline through the winged figure of the Madonna on the volcanic El Panecillo.

Stars dance around her crown, a chained dragon cowers by her feet and the swirling clouds of Ecuador shift and mask the house-layered hillsides of Quito, the highest capital in the world.

Well, officially the highest capital in the world.

Disclosure – we paid a reduced price to travel to Ecuador from Cardiff with KLM, Metropolitan Touring and Bird PR. However, as ever, as always, I remain free to write whatever I like here on the lab. Otherwise there’s just no point. 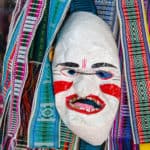 5 thoughts on “Have you heard of this tradition in Quito, the highest capital in the world?”