Want to know some fun and interesting facts about France?

There’s just so much to say! From the country that made inverted pyramids stylish and brought supermodels into politics, here are 21 interesting facts about France.

Psst… Wanting to know some unusual things about France? Or even unusual things to do in Paris? We have a collection of Paris itineraries, from 48 hours in Paris to 4 days in Paris. Plus, of course, interesting facts galore!

It’s the most visited country in the world

It’s no secret that baguettes are popular in France. But did you know that France operates an emergency boulangerie (bakery) rota to make sure that everyone has access to fresh bread, even during bank holidays?

Instead, there’s a cloche volant or flying bell. It still delivers chocolate, though :-)

Louis XIX Reigned for only 20 minutes

Louis XIX became king in 1830 but abdicated 20 minutes later in favour of his nephew, the Duke of Bordeaux.

France has more Michelin Stars than anywhere on earth

No fewer than 485 restaurants have won this accolade (which, incidentally, also began life in France.)

Established at the time of the French Revolution (1789 -1799) the phrase became official in 1946. What does it mean? Freedom, equality, brotherhood.

Marie Curie is the only person in the world to hold two Nobel Prizes in two different science subjects. She worked from her laboratory in Paris but was actually Polish, having fled to France to survive.

French physician René Laennec began experimenting with rolled up cardboard tubes and one thing led to another.

France has an annual music festival

Each year, the streets are filled with musicians all day and into the night for the Fête de la Musique.

French isn’t the Only Language

Beyond French, you’ll find Breton, Catalan, Basque and Occitan spoken and that’s just for starters when it comes to other languages.

From brie to roquefort and many, many more.

“How can you govern a country which has two hundred and forty-six varieties of cheese?” Charles de Gaulle

People do say Ooh, la la. Though most will deny that they do

The system of Braille was invented in France by Louis Braille who lost his sight as a child.

And the word entrepreneur

It’s not the only word from France that has entered everyday English use but its role in the George W Bush gaffe makes it the most famous one.

Rivalry and Friendship with England

To leave a party without saying goodbye is to “filer a l’anglaise.”

And a condom is also known as a capote anglaise

Even Bordeaux, one of the of the world’s finest and oldest centres for wine, developed as it did due to a spat with (and tax law from) England.

Cassoulet, a traditional dish found in the southwest, came from the desire for sustenance to fight the English.

And today, both countries share an aircraft carrier and an integrated defence plan (along with the rest of the United Kingdom.)

Yes, you can buy them. And snails. They’re cooked in butter and garlic.

France has strict swimwear rules. No board shorts, only speedos. And hair must be covered at all times. 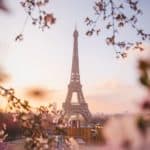 10 thoughts on “21 Interesting Facts About France”