Where can you see the Scream in Oslo? The simplest answer is at the Nasjonal Museet. The next answer involves the Munch Museum. But there's somewhere even more important to visit first...

THE SCREAM IN OSLO: THREE KEY PLACES TO VISIT

It's always powerful to see a work of art where it should be. But when it comes to visiting The Scream in Oslo, it's even more poignant.

Scroll on down to find out where to see The Scream in Oslo, as well as more of Munch's art.

Or, first, spend some time reading about why this painting belongs in Norway's capital.

EKEBERG PARK: THE LOCATION OF THE ORIGINAL SCREAM

As walks in the woods go, it's an unusual twist: fitting my face to a metal grid, taking a breath and letting out a scream.

What makes it stranger yet is that's what Oslo wants you to do.

The forest in Ekeberg Park overlooks the city of Oslo and its fjord. This spot in particular, the inspiration for Edvard Munch's The Scream.

The Scream Around the World

There aren't many paintings in the world that have sunk themselves so deep into our thinking that they symbolise a single emotion (and earn themselves an emoji.) But something in the melting terror of that face found a truth that crossed cultural barriers for thousands into millions across the globe.

I first saw the work as a student, I expect. Printed up on an Athena poster and resting amid black and white prints of the Brooklyn Bridge, the flatiron building and women in torn T shirts writhing behind words like "man cannot live on bread alone."

Research tells me the work also appeared on The Simpsons, in Andy Warhol's works and that it even inspired the poster for the (godawful) Macauley Culkin film Home Alone (versions 1, 2 and 3.)

But aside from such horrors, it's in moments of true despair, of grief and loss, that the real meaning of the work became clear to me. A view from Sorrenga across the Oslo Fjord

Munch, Oslo, The Scream: More Than Just a Pretty Park

The artist, Edvard Munch (pronounced Moonk with a short oo as in book) walked through these woods after visiting a friend in the nearby psychiatric hospital.

As he wrote in his diary:

"I was walking along the road with two friends – the sun was setting – suddenly the sky turned blood red – I paused, feeling exhausted, and leaned on the fence – there was blood and tongues of fire above the blue-black fjord and the city – my friends walked on, and I stood there trembling with anxiety – and I sensed an infinite scream passing through nature."

What's interesting is that until I read that passage, I'd never even noticed the two people in the background of the painting. Nor the landscape, the curling swirling shape of the fjord. I'd always assumed that that tormented person stood alone.

The city skyline of Oslo has changed considerably since Munch's afternoon walk back in in the 1890s and will again over the next 10 years. But the swirl of Oslo's fjord remains the same. Filming in the spot that inspired The Scream in Oslo

The Munch Museum in Oslo Does NOT Have The Scream...

I think I'd assumed that the curve of blue beneath the blood red represented another layer of pain for the screamer. But standing here, it's clear that it's simply geography that makes the water bend like that.

Another surprise involved learning that there isn't one scream but at least four, four shrieks of anguish streaking up toward the sky.

Thankfully, at least one remains in Oslo, although, curiously, not at the Munch Museet, an art museum dedicated to Munch's work.

"Our curator deliberately chose not to display that," explains the press officer as we meet surrounded by Scream paraphernalia in the gift shop. Mugs, postcards, even an (aptly) screaming black and white babygrow.

"There is so much more to Munch than the Scream and that is what we want to show here."

Exhibitions change regularly at the Munch Museet and on the day I visit (with the Lonely Planet team, filming) the theme is Toward the Forest.

After getting in and out of the taxi three of four times for the camera and negotiating the delayed reactions of the automatic door, I've earned my time to look at the art. 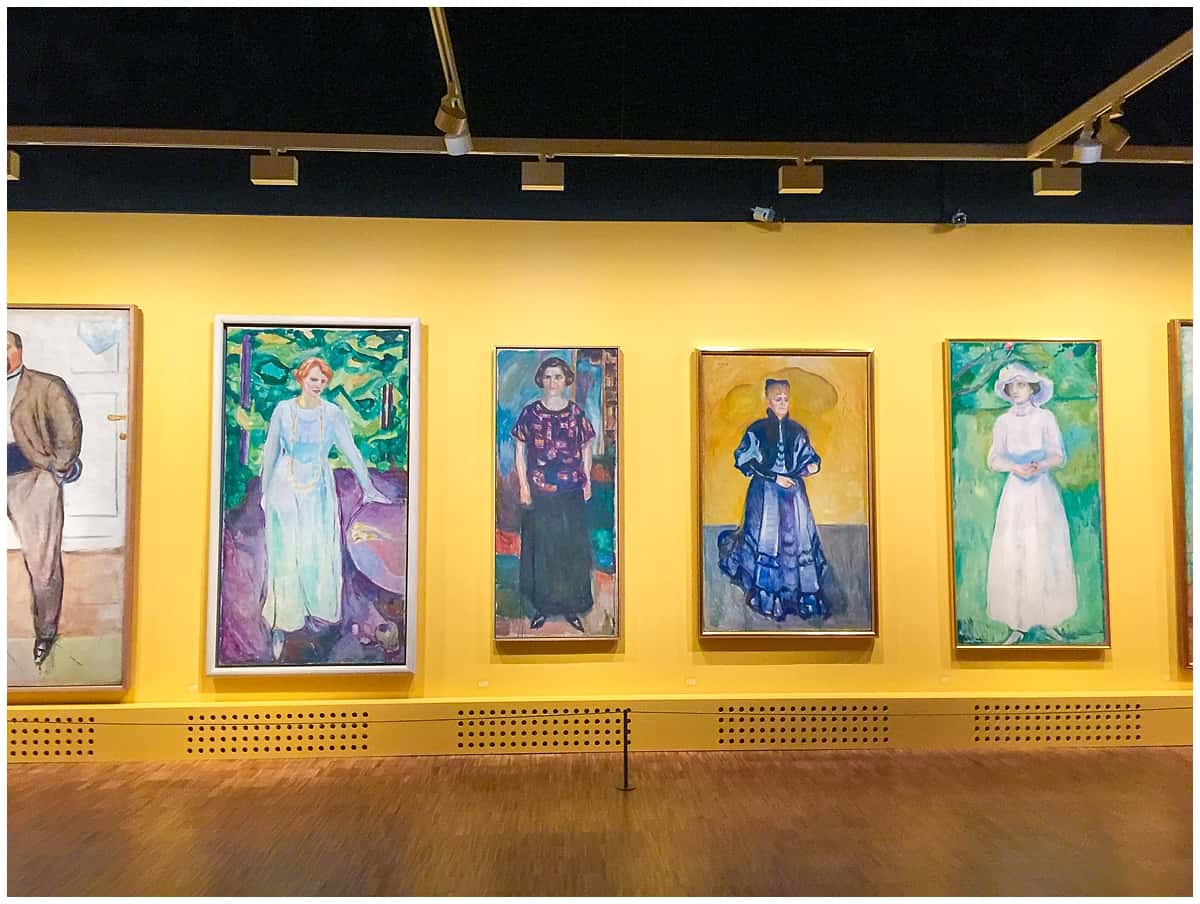 But You Should Go Anyway

Of course, I wonder whether or not the forest in question is THE Ekeberg forest that links nature and Munch and the scream but I'm not convinced that it is.

Karl Ove Knausgård, the exhibition's curator has this to say about his choice. "I want to exhibit unknown pictures on the premise that I believe it is possible for us to experience Munch as if viewing him for the first time as that he was: a painter who never found inner calm, and who never became stale.

"The exhibition begins in the outer world in a room filled with light and sun with motifs of people in parks and gardens. In the next section, the people gradually disappear from the motifs, "Knausgård explains. “The empty landscapes left behind are ambivalent spaces – the loneliness within the deserted landscapes meets the force and wildness of nature. For Munch, the forest was not only a place where something ended, but it was also a place where something began."

The final section includes a series of near life-size portraits, a line of characters decked in bright colours, looking me in the eye.

Most notably, for me, was the last one in the series, a man with a piercing gaze, a cross between a Disney villain and the smouldering charm of Tom Selleck who played Monica's older boyfriend in Friends.

As it turns out, that is Munch, or his version of himself that stares back at me.

To stare into the eyes of The Scream itself requires a visit to a different place: The Nasjonal Museet.

Seeing The Scream in Oslo at the Nasjonal Museet

We arrive quite close to closing time, and thread our way through the schoolchildren and the crowds.

Most of today's filming involves reaction shots. I spend a lot of time walking across bridges, around corners and in between a sliced cow (that's Damien Hirst's Mother and Child work at the modernistic Astrup Fearnley, a story for another time) but for this, I want the camera to catch my first expression, raw and real.

And I'm not sure what that is.

Anticipation flutters like a fountain as I draw closer, a mix between pre-interview nerves, a first date and the curiosity of opening that envelope on results day.

Although crowds of people swarm through this museum, there is one room that simply feels different. Something is different before it can be seen.

And then, without fanfare, there it is.

Small. Quiet. Loud. There. Looking just as it should.

Selfies and The Scream

What's curious, in this context, is the amount of pleasure it seems to generate. Queues of people wait for their Scream-selfie moment and the museum has moved with the times, installing a protective screen in front and literally telling visitors to go for it.

"We were otherwise fighting a losing battle," their spokesperson whispers as I look on.

Naturally, we join in and do the same.

What Did I Feel When I Saw The Scream

It feels surreal, almost as surreal as standing in the middle of the woods screaming into a camera, with the realisation that this is the first time since childhood you have heard yourself scream. And it just doesn't sound like you thought it would. If you ever thought about it at all.

I've often wondered about - and written about - whether or not it's important to visit places where things actually took place.

Ancient philosophy in Athens. The bus where Rosa Parks sat. The place where Hitler stood.

Usually, a visit makes events seem more real, more sombre and more serious whereas in this case, it's the reverse.

Somehow, from the white-knuckled, fingernail tearing image of pain, the world at large seems to have turned it into a way to have a good time .

And perhaps there is no better remedy for suffering and loss than to stop and think of that.

Disclosure - I visited The Scream in Oslo to work on a video project for Lonely Planet. Obviously, as ever, as always, I kept the right to write what I like here on Inside the Travel Lab. The thought of doing otherwise is enough to make me scream...

What do you think about The Scream? Would you Visit Oslo to see it? What paintings have inspired you, one way or another, over the years?

What is hygge? The quickest answer would be something like "cosy." But END_OF_DOCUMENT_TOKEN_TO_BE_REPLACED